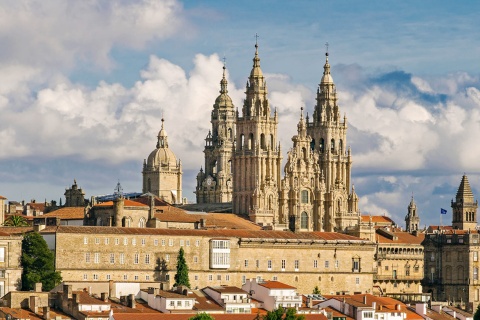 For centuries, thousands of pilgrims have travelled on St. James’ Way every year, finally reaching the capital of Galicia and entering the iconic Cathedral. According to tradition, this is the burial place of the relics of James the Apostle, discovered in the 9th century.

But Santiago de Compostela is very much a living city, with other attractions for travellers, pilgrim or not: countless restaurants and bars where you can enjoy the delicious seafood of Galicia, a UNESCO World Heritage old town centre, daring contemporary art… There's plenty to do in this city which combines history with a younger modern side.

Life around the Cathedral

Perhaps the most special place in Santiago is Plaza del Obradoiro. Life in the city seems to revolve around this point, the site of the Cathedral, Raxoi Palace, and the luxurious Hostal de los Reyes Católicos, said to be the world’s oldest hotel. On this square you’re likely to see pilgrims with their inevitable walking sticks and scallop shells. There is a ritual for visiting the Cathedral for the first time: admire the Portico de la Gloria, embrace the figure of St. James on the main altar, go down to the crypt, go up to the rooftop (what a view!) and if you’re lucky, see the botafumeiro (an enormous censer) in action—they only use it on religious holidays or if requested in advance.Around the Cathedral, every step is a discovery, with other very charming squares such as Praterías (with the best view of the belltower, La Berenguela) or Quintana with its pretty stairs and other monuments like the imposing Monastery of San Martiño Pinario.It’s curious that even the far outskirts of the city seem as if they were designed for admiring the Cathedral. An example is the quiet Alameda Park and the viewing point of Monte do Gozo, with sculptures of pilgrims which have starred in so many photographs.

Fine dining and the modern city

To be tempted by delicious smells and tastes, and see why Galicia’s food is so famous, there’s nothing like a visit to the Mercado de Abastos food market, the second most visited place in the city. Here you can buy and taste seafood fresh from the rías, cheeses and Padrón peppers, or try the famous tapas. You can also feel the real atmosphere of Santiago on Calle Franco and Calle Raiña, in the heart of the old town, where locals and visitors have been enjoying tapas “since forever” and where you will find plenty of restaurants for trying octopus “a feira”, scallops, Santiago cake or wines like Albariño, considered one of the world’s best white wines.Beyond the winding streets and the stone mansions, the modern side of Santiago can be seen around the university area, in its art galleries, and above all in two places: the Galician Contemporary Art Centre and Cidade da Cultura by the New York architect Peter Eisenman, one of the most surprising examples of Galicia’s contemporary architecture.Many people say that taking the Way and arriving in Santiago is an adventure that can change your life. This city certainly seems capable of keeping you here.