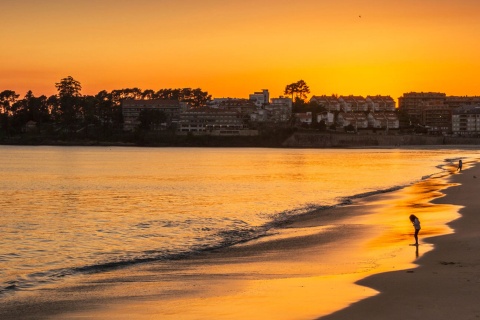 No-one questions the fact that Sanxenxo holds the honorary title of tourism capital of the Rías Baixas. Almost joined to Portonovo, both have a young, happening atmosphere of beaches and bar-hopping.

Sanxenxo is one of Galicia's tourism capitals. Its population increases in summer and the large-scale urban development means everything is modern. Before the tourist boom, it was nothing more than a small fishing village, but the constant arrival of outsiders transformed its appearance totally, as people were drawn by the magnets of its beach and bustling nightlife. A Lanzada, a beach which runs for more than four kilometres, belongs to the town councils of O Grove and Xanxenxo and is one of the most popular in Galicia. The sanctuary there is visited by sterile women, since old legend has it that its waters have the virtue of being able to influence fertility.

The port of Sanxenxo is clearly clearly designed for tourists, offering places to drop anchor, above all for shallow-draught boats. It is also used by small fishing boats which work inside the estuary. In any case, the fishermen's neighbourhood and the outskirts of Sanxenxo are still reminiscent of times gone by, as is Portonovo, an attractive and nearby seaside town. The traditional local flavour of its harbour makes it one of the most charming corners of the Rías Baixas.