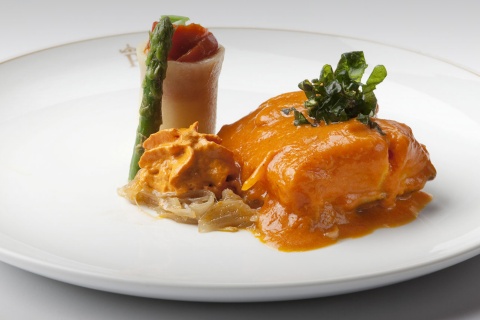 The cuisine of La Rioja

La Rioja is situated on the Camino de Santiago route. It is a land of travellers and exchange, where relationships are formed and culture and customs interchanged. All this is reflected in its gastronomy which, apart from providing the traveller with the opportunity to taste top quality wines, has also been very much influenced by its neighbouring regions, adapting the dishes with that touch of exquisite simplicity so typical from this area.

La Rioja cuisine is simple and uses the top quality products found in the region. The popular agricultural tradition of the area provides the cuisine with a great variety of local vegetables and pulses: peppers, garlic, onions, artichokes, asparagus, lettuce, chard, borage... What visitor to La Rioja can resist tasting its great stews, made with fava beans or "caparrón" beans. These dishes are unique and use beans which have not been completely dried. As a result, the beans conserve their natural flavour and absorb the flavour of the quail or spicy sausage with which they are cooked. The pig, a symbol of Christian culture, has always lived side by side with the people of La Rioja, either as wild or as farm animals. The Muslim presence in mainland Spain has left its mark on this region, the Riojans having a great taste for lamb. Both types of meat are extremely popular, although the fish dishes put up a fierce competition. These are prepared using bonito, cod, hake, red bream and mackerel. Sweet black pudding and Riojan chorizo are just a couple of examples of the produce prepared in the mountains.

This small Autonomous Region has influenced the rest of Spain. With the River Ebro acting as the main transmission channel, its delectable green sauce and "salsa fritada", which accompanies fried dishes, have earned popularity throughout the country and been incorporated into other national dishes. The Riojan-style potatoes, prepared with chorizo and at times spare ribs, have been the point of admiration of many gourmets, including Bocusse. Its lamb chops are a vital component of the suppers held in bodegas and companies and are ever-present in restaurants, where they are roasted on an open fire which gives them that special taste. Although La Rioja has no coastline, traditional fish dishes abound. Worth special mention are the Rioja-style cod, cooked with tomatoes and peppers, and the red bream in sauce, which is a typical dish served on Christmas Eve; the delectable river crab with fried fish, bonito and the famous hake in green sauce. The locals of La Rioja have always known how to make the most of the produce that nature has given them. They are experts in giving it that "special touch" which makes their dishes that little bit different: trout, crab, snails and wild mushrooms are carefully combined with other ingredients resulting in many dishes which have come to be considered delicacies.

The quality of the wine is what has made La Rioja a household name. Its Denomination of Origin, famous world-wide, includes white and rosé wines but it is the excellent red wines which are most appreciated. These are aged in barrels called "barricas" to produce "crianzas" (matured for at least two years) and "reservas" (matured for at least three years) which, whether they are from Rioja Alta, Alavesa or Rioja Baja, obtain magnificent levels of quality.

To finish off, the “golmajería”, as they call the pastries in La Rioja, as all good meals have to end with a good dessert. Amongst the Riojan sweets, you can find “Hormigos” made from flour, honey, milk and caramel, the rich marzipans from Soto, “Molletes” from Santo Domingo de la Calzada, “Fardelejo” (a small empanada filled with almond) and fruit of the highest quality: apples, pears, melons...that can be eaten fresh, but also cooked in wine that naturally hails from Rioja, producing an amazing combination of flavours.

Trout in sauce with mushrooms 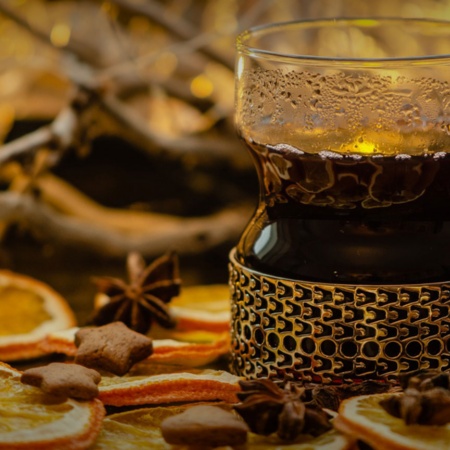 Calahorra artichokes in their own sauce