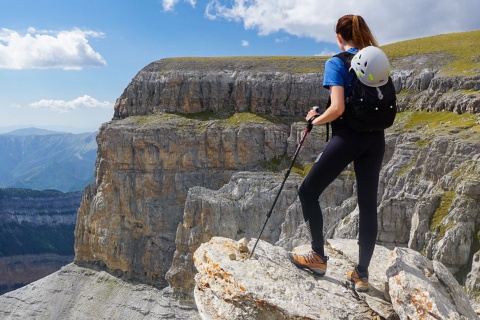 Aventure in the province of Huesca, Aragón

These are plans for those seeking thrills and challenges in a natural environment. We offer suggestions for you to enjoy the great outdoors while pursuing activities like canyoning, Tyrolean traverse and rafting. But not all the thrills of nature require physical effort, you might like to take a 4x4 route or take in spectacular views of the natural surroundings by way of a hot-air balloon flight.

Because in addition to having a very high rate of daylight and mild temperatures practically all year round, Spain is the second most mountainous country in Europe. Its natural landscapes make it the ideal place for outdoor sports, and in fact Spain has more UNESCO Biosphere Reserves than any other country. Moreover, Spain has a wide variety of different natural surroundings, ranging from desert and volcanic landscapes to rivers, valleys, steep cliffs and high peaks.Bear in mind that for most of these activities you need to go through a specialist agency or have authorised instructors and guides. So, in addition to having fun and enjoying the environment, you will be doing so as safely as possible. 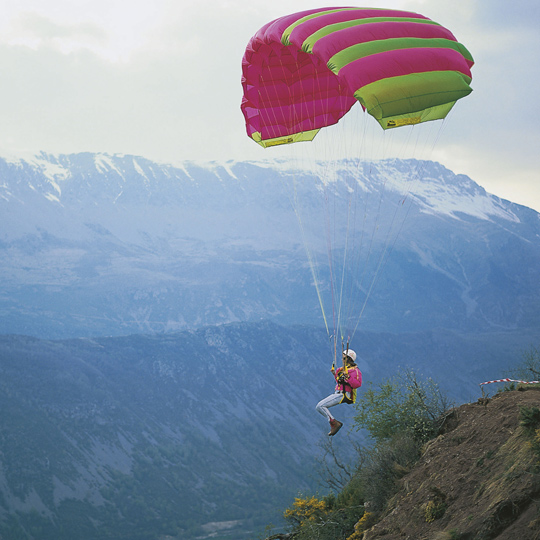 Aventure in the province of Huesca, (Aragón)

Spring and summer are the best times of the year for canyoning, though you can also pursue this activity without problems in the autumn.Although there are plenty of places to try canyoning in Spain, the Guara Mountains and Canyons Natural Park (Huesca, Aragon) is outstanding, with one of the highest concentrations of canyons in Europe.The Pyrenees in general, and especially Ordesa and Monte Perdido National Park and Picos de Europa National Park are very popular areas for canyoning in northern Spain.In central Spain, areas such as the Natural Parks of Serranía de Cuenca and Alto Tajo (Cuenca, Castile-La Mancha) and the Jerte Valley, La Vera and Las Hurdes in northern Extremadura are also well known.Notable spots in the south include Garganta Verde, Grazalema Natural Park (Cadiz), and the descent of rivers including Río Verde (Granada), the Trévelez (Sierra Nevada) and the Guadalmina (Malaga), for example.

You can go white water rafting practically all year round, though we advise you to check in advance. Moreover, while it is a sport for all ages, there are quite often special, children focused programmes to be found nationwide.Two of the most famous rivers for rafting in Europe are to be found in Spain, the Noguera Pallaresa and the Noguera Ribagorzana in Lleida (Pyrenees). The rivers Cinca, Gállego, Ésera and Ara in Huesca are other popular rafting spots in the Pyrenees. The recommended time of the year for rafting in this area stretches from the thaw months (around March and April) to October.The Miño river can be found in Galicia, a really fun and accessible destination for rafting: particularly in and around the vicinity of Arbo. The main spots in Cantabria and Asturias are the Alto Ebro and the area around Picos de Europa National Park, the river Cares and the river Deva. 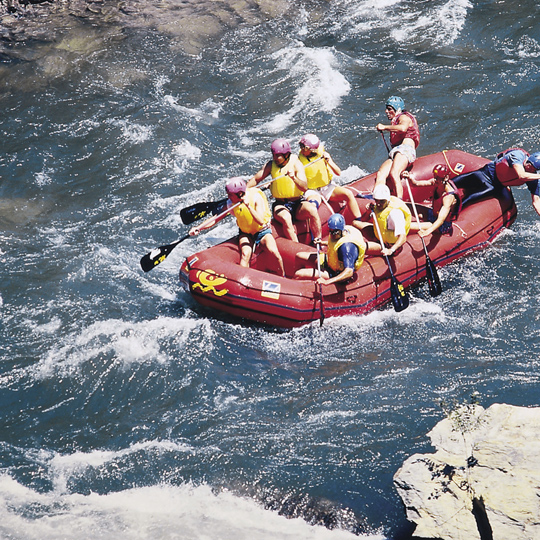 Rafting in the province of Lleida

Inland Spain also has some popular rafting areas, including the river Júcar and the Cabriel on its course through Cuenca (Castile-La Mancha) and the Valencia region, and Sierra de Gredos (between Madrid and Avila or Salamanca, in Castile and Leon).Andalusia also boasts rafting destinations worth a visit: the upper stretch of the river Guadalquivir, mainly where it passes through Jaén; the cliffs of Rincón de la Victoria and the river Genil, on the Costa del Sol (Malaga); the Cabo de Gata area in Almería; and the Zahara de los Atunes reservoir in Cadiz.These are just some of the most popular rafting destinations, but you can go water rafting practically anywhere in the country. 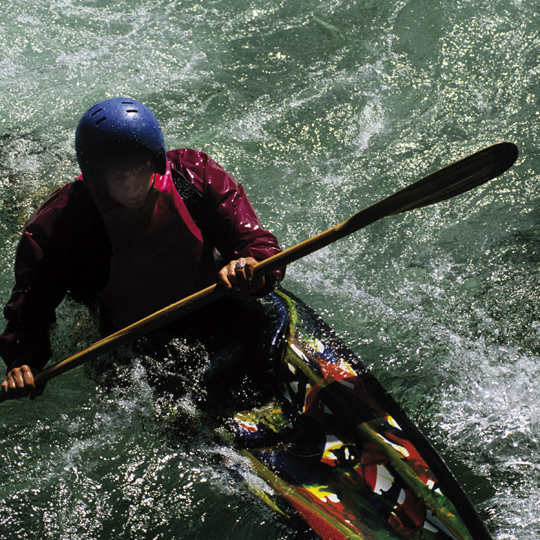 Adventure parks are enclosed areas in the countryside where you can pursue a wide range of activities such as Tyrolean traverse, snowshoeing excursions, archery, orienteering, climbing, fixed rope parks, etc.They are ideal places for a day of adventure activities in the open air. Moreover, a lot them have specially designed programmes for young children.

Off-roading in the Doñana National Park in Huelva (Andalusia)

If adventure involves venturing into rugged countryside difficult to access or exploring vast expanses of territory, what better way to do so than in a 4x4? There are organised routes all over the country on duly authorised tracks, not to mention a network of cattle routes.Other interesting landscapes you can visit in a 4x4 include the semi-desert of Bardenas Reales Natural Park in Navarre, or the flatlands of the Delta del Ebro Natural Park (Catalonia).

NATURE FROM A HOT-AIR BALLOON

You can take in the marvels of Spain’s natural beauty from the air. Among the several options available, hot-air ballooning is one of the best. Enjoy a noiseless, hassle-free flight with the air as your guide. If feeling like a bird is for you, there are a hot-air balloon flights to choose from practically all around the country.There is plenty to choose from in Castile and Leon from April to October, when you can fly over areas like Montaña Palentina, Sierra de Francia, Sabinar de Calatañazor, and Arribes del Duero, to name just a few. There are plenty of options in Catalonia, such as seeing the Pyrenees from the air, or the volcanic landscape of the Olot Valley in La Garrotxa, an area with an extraordinary concentration of extinct volcanoes.Or why not take in the extensive La Rioja vineyard landscape from the air, from which you can also make out the Pyrenees in the distance. Or you might like to fly over olive groves in Andalusia and Toledo (Castile-La Mancha). If seascapes are more to your liking, there is a wide range of options to choose from, such as those on Costa Brava, Majorca, the Basque Country or the Region of Valencia. By the way, bear in mind that the best time to start a hot-air balloon flight is first thing in the morning. 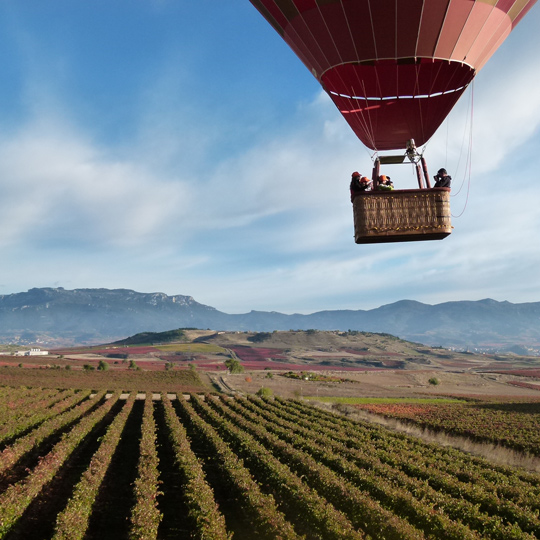 A hot-air balloon flight over the vineyards of La Rioja © Turismo de La Rioja
Find out more about...
What to do 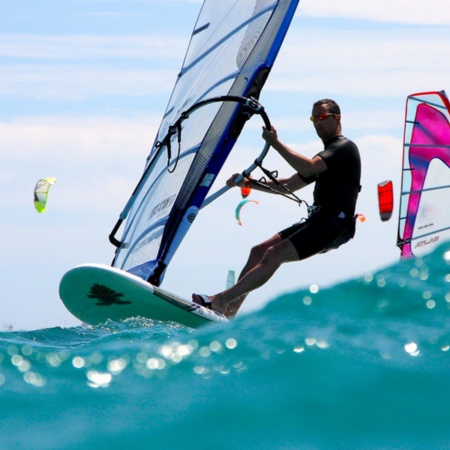 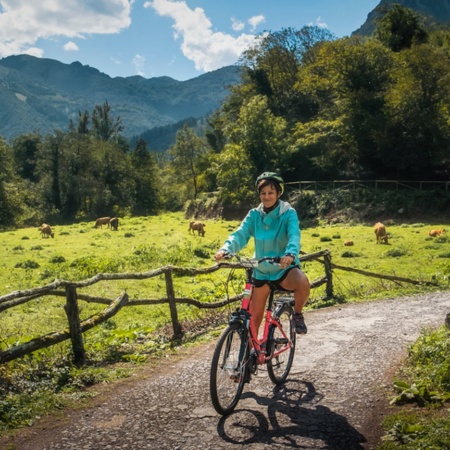 Bike routes near the rivers in Asturias 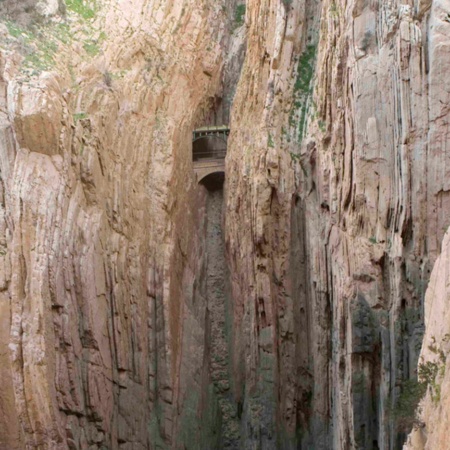 Caminito del Rey: once the world's most dangerous footpath