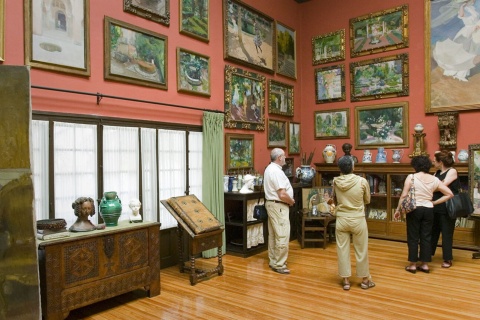 A journey through Sorolla's Spain

Light as a work of art

"The painter of light". This is how Joaquín Sorolla, one of the main figures in the history of Spanish art and one of the most internationally famous painters of his time, is known. Because this artist was able to capture light and movement in his paintings like none other. You'll find rural landscapes, typical Mediterranean seascapes, works of social realism, portraits,and more, all of which have one thing in common: a palpable warmth and sensitivity.What landscapes inspired this genius? Where can you find his main artworks? Take a pictorial journey along beaches lapped by crystal clear waters, through gardens and a world of colour.

But however much you read about this great 19th century artist, the only way to appreciate the huge emotional power of his paintings is to come and see them for yourself. Discover Spain, Discover Sorolla's work and enjoy the colours of the Mediterranean. Let the light surround you. Because almost a century after his death, Sorolla has become a true classic. Because, as Huntington (the North American Hispanist who commissioned the panels for the Hispanic Society) said: "he has taken his painting theory to the limit and will live on because of that".