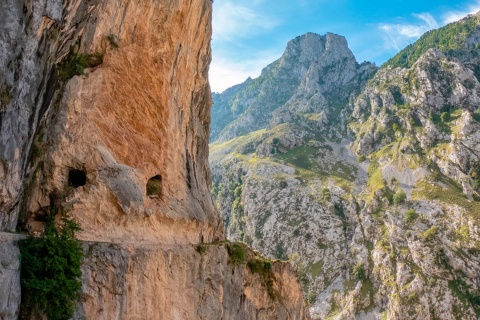 Hikers on the Cares Trail

The most famous trail in Picos de Europa National Park

Known as the “Divine Gorge”, this hiking trail between Caín (León, Castilla y León) and Poncebos (Asturias) lets you walk among mountains over 2,000 metres tall, along the imposing ravine carved out by the river Cares. You’ll see peaks rich in legend, cross bridges from one side of the gorge to the other, pass through around 70 tunnels carved into the rock, and see some spectacular natural settings.

History of the trail

The Cares Trail always features in lists of Spain’s most beautiful hiking trails. Although it isn’t very demanding (except for a few inclines), you should consider its length and plan your route well.Did you know that this deep ravine was not just created by erosion by the river Cares? It is also the result of engineering work carried out in the early 20th century to channel water to the hydroelectric dam at Poncebos. This made it much easier to take this delightful walk without getting lost. Just follow the canal.Experienced hikers may be interested to know that the official trail (PR-PNP 3) actually begins, or ends, at Posada de Valdeón in León and not at Caín, making the route much longer (21 kilometres each way). However this first stretch is now little used and most people choose to begin at Caín.

Walkway on the Cares Trail

What you will find

First of all, it’s useful to know you can take the same trail in the opposite direction, starting in Asturias. Starting at Caín is easier, because if you start at Poncebos you almost immediately encounter a fairly tough upward slope for two kilometres. If you begin in León province, this stretch is downhill.For those taking the whole trail, here’s what you will find. Setting out from Posada de Valdeón, you come to Cordiñanes, where the valley starts to narrow. After this village you’ll find the viewing point at Tombo, with its iconic sculpture of a chamois, a symbol of the Picos de Europa mountains. You’ll see immense beech forests, and a little further on, Ermita de Corona, the chapel where King Don Pelayo is supposed to have been crowned. Also in this area is Chorco de los Lobos, a pit which was once used to trap wolves.

Then you come to Caín, a village surrounded by mountains over 2,600 metres high. The road ends here, and the Cares hiking trail begins at the entrance to the natural gorge, where most hikers start or end their walk.You’ll follow the fascinating path through narrow tunnels and caves, with beautiful spots worth photographing along the way, such as the bridge of Los Rebecos (with dizzying views over the river), Bolín bridge, and the walkway at Pasarela de los Martínez (on the frontier between Castilla y León and Asturias). At Los Collaos, the highest point on the trail, you start to descend towards Poncebos. There, with luck, you can see the peak of Mount Urrielu (also known as Naranjo de Bulnes), with its vertical faces over 500 metres tall, an icon of Spanish rock climbing.It’s best to enjoy the walk at a leisurely pace. Stop for snacks, see how trees grow in impossible places, listen to the wildlife… This trail never disappoints.

Hikers on the Cares Trail

How to get to the Cares Trail by car

From Asturias, take the AS-114 to Cangas de Onís-Arenas de Cabrales (Las Arenas). In the town centre, take the AS-264 to Poncebos, where you can park your car and start the trail. It’s just over an hour and a half from the city of Oviedo.If beginning at the south end of the trail (a two-hour drive from the city of León), take the N-625 to Posada de Valdeón or continue to Caín, where there are several parking areas. 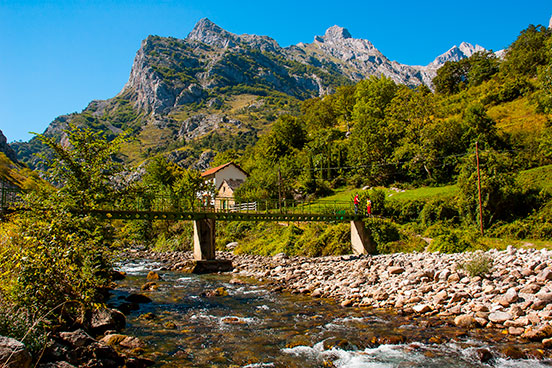 Although the trail is not difficult, the terrain is rough and you need to consider the length of the route, especially if you plan to come back the same way. It’s advisable to set out early and be well-organised.If you’re only going one way, some hikers (friends or family) choose to swap cars at each end of the route, with one group setting off from each end. But remember that the trip from Poncebos to Caín is over 100 kilometres by road.There are private taxis which can take you back to your starting point, and companies which will take you on all-terrain vehicles through the landscapes of Picos de Europa. You can find some of them here. Be sure to wear suitable footwear and take a waterproof garment and some warm layers, as the weather can change abruptly, even in summer.Bring food and water for a picnic lunch, as there is nowhere to buy food along the way.This trail is not recommended for children under the age of 12.Cycling the trail is not permitted.

When to go on the trail

Although you can walk it at any time of year, we recommend going in spring (after the thaw the waterfalls are at their best) or early autumn, so you can avoid the winter cold and the summer crowds.

What to see nearby

You’ll be in the heart of Picos de Europa National Park, with plenty of interesting places, especially in Asturias: Sotres (the highest village in Asturias), Arenas de Cabrales (where they make a famous cheese), and the lakes at Covadonga (about an hour’s drive away). You can also take the funicular to the pretty village of Bulnes. 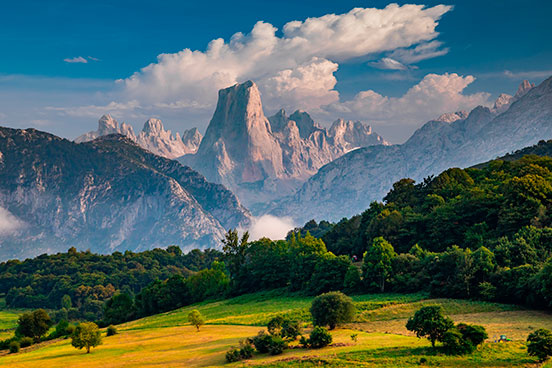 To the south of the trail (Castilla y León) you can try the delicious blue cheese made in Valdeón, and the famous sausages of León. Asturias is famous for hearty dishes like fabada (bean stew) and cachopo (serrano ham and cheese sandwiched between beef steaks).

The Pulchra Leonina, the Sistine Chapel; of Spanish Romanesque…

The former Ovetum has been closely linked to the Asturian…

Cangas de Onís, capital of the area of the same name, sits in the…

Covadonga is the place where the Re-conquest began under king…