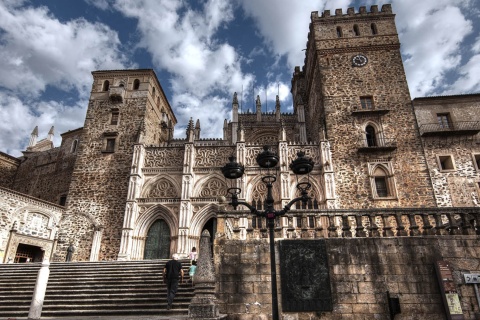 Located in the region of Las Villuercas in Cáceres province, Guadalupe is a historic village, with cobbled streets and traditional architecture, including heritage buildings like the Royal Monastery of Our Lady of Guadalupe, a UNESCO World Heritage Site.

Guadalupe is well-located for exploring other towns and villages in Las Villuercas, such as Cañamero, Logrosán and Berzocana. Another one of the area’s most appealing traits is the simple, yet succulent Extremaduran cuisine, made with first class ingredients.

Set at the foot of Sierra de Altamira, La Puebla de Guadalupe is an illustrious town, because of its history and its remarkable built heritage. This typical mountain village, declared an Historic-Artistic Site, grew under the wing of the Royal Monastery of Our Lady of Guadalupe. The Monastery, which was declared a World Heritage Site in 1993, was commissioned by King Alfonso XI of Castile in the 14th century as a sign of gratitude to the Virgin, after his victory at the Battle of Salado in 1340. Since its foundation, the Monastery became one of the main pilgrimage centres in the Peninsula. It was also the setting of significant events, like the audience that the Catholic Monarchs granted Christopher Columbus, where they gave him the ships that would take him on his journey to the New World. After passing the superb façade, with its remarkable bronze doors, you enter the building. Inside there are two outstanding cloisters, one Gothic and one Mudejar, with a pavilion in the latter showing the transition from Gothic to Mudejar style. You mustn’t miss the sacristy, which has eleven paintings by Francisco de Zurbarán. You should also take a look at the Virgin's side-chapel, built by Lucas Jordán, which houses the image of Our Lady of Guadalupe, patron saint of Extremadura. Located in the central Plaza de Santa María, the fountain of Tres Caños is a reminder of one of the historical milestones of La Puebla, since it was in this square that the first Indians brought by Columbus from his second journey to America were baptised. Across from the Monastery is the former hospital of San Juan Bautista (built in the 14th and 15th centuries), now the Parador Hotel. Throughout its existence, the building received thousands of pilgrims who came to Guadalupe. It was also an important School of Medicine, where many of the doctors that worked for the Royal Court were trained. The hospital has an annex that reminds us of the town’s past cultural splendour: the Colegio de Infantes, where students learned grammar, singing and theology. Today this historic building is the Parador de Guadalupe. The Calle Mayor connecting the higher and lower parts of the city is the main artery in a network of cobbled streets and traditional homes with wooden balconies, porticoes and porches. Another noteworthy building is the country chapel, Ermita del Humilladero (15th century), about four kilometres from the town centre.

Gastronomy, festivities and the surrounding area

Guadalupe is a great showcase for the regional cuisine. The local dishes tend to be simple, with ingredients of excellent quality: Iberian sausages, ajoblanco (a cold soup with almonds, garlic, bread and olive oil), migas (breadcrumbs with chorizo and bacon), caldereta de cordero (lamb stew) and chicken “a lo padre Pedro” - with peppers and tomato. The best accompaniment to these dishes is a local wine with the Designation of Origin Ribera del Guadiana. One of the most important fiestas in La Puebla is celebrated to honour the Virgin of Guadalupe, on the 8th of September. The town’s most notable traditions include coppersmithing, an ancestral technique that may have originated locally with the work of the Hieronymite monks at the monastery in the Middle Ages. This art has been passed down through the generations, with jugs and more decorative pieces such as jewellery still being created by hand. These objects can be purchased from many of the traditional shops in the town centre.  Guadalupe is the perfect excuse for a trip to Las Villuercas, the mountainous massif to the east of Extremadura. The journey through stunning mountain scenery takes in towns such as Bohonal de Ibor, Cañamero, Logrosán and Berzocana. Another great choice is to visit the region of La Vera, with an exuberant landscape marked by the bank of the river Tiétar, where you will find charming places like Hervás, the Monastery of Yuste and Jarandilla de La Vera, whose palatial castle is now the town's Parador Hotel. Between Navalmoral de la Mata, Plasencia and Trujillo is Monfragüe National Park, a large natural space where you can go hiking, or take one of the bicycle or horse riding routes. Also, just over 20 kilometres from Guadalupe you can visit the Villuercas-Ibores-Jara Geopark, a mountainous massif of more than 2,500 square kilometres, recognised by UNESCO for its unique geological heritage.

Museums of the Royal Monastery of Nuestra Señora de Guadalupe 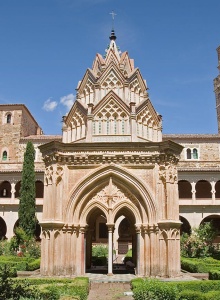 Gardens of the Royal Monastery of Nuestra Señora de Guadalupe 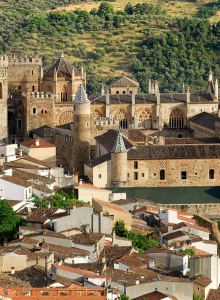 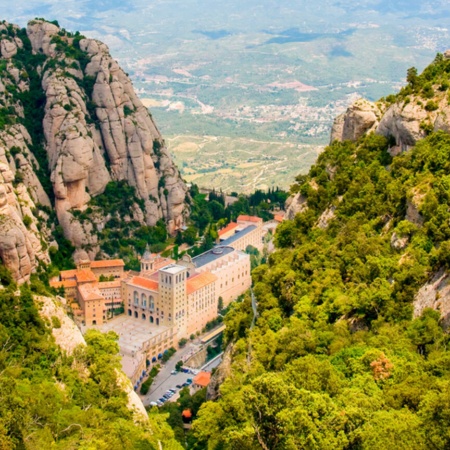