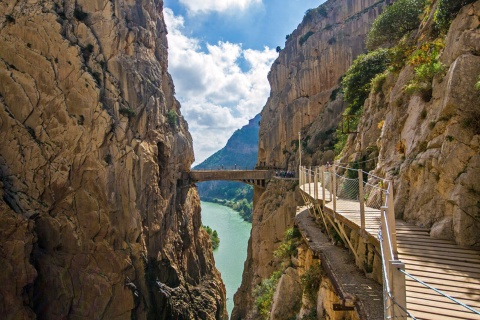 Once the world's most hazardous footpath

This almost 8-kilometre path near Malaga (Andalusia) was once considered one of the most dangerous in the world. Today the entire route has been carefully restored, but although it's now much safer, one thing hasn't changed - the unique experience of strolling along walkways hanging over 100 metres up on a sheer cliff face. The views are unforgettable. The Caminito del Rey route is spectacular from beginning to end, running through cliffs, canyons, and a large valley. It crosses the landscapes of Desfiladero de los Gaitanes, a gorge carved out by the river Guadalhorce, with walls 700 metres high. The area is also inhabited by a wide variety of plant and animal species; with a little luck, you can see highland birds like Egyptian vultures, griffon vultures, or golden eagles, and mammals such as wild boar and Iberian ibex. You will need to buy tickets for El Caminito del Rey, and you can reserve them on the official website.

Why is it called Caminito del Rey?

This unique aerial path, suspended 100 metres up against the walls of the gorge, originates in the early 20th century. It was built between the waterfalls of Gaitanejo and El Chorro to bring materials and maintenance workers to the local hydroelectric dam. In 1921, King Alfonso XIII officially opened this feat of engineering, taking the walkway to the Conde de Guadalhorce dam, and since then it has been known as “the King’s little walk” - Caminito del Rey.

The trail is linear and taken one way only, going downwards and from north to south, some of it on mountain paths and some on suspended walkways. It’s 7.7 kilometres long and takes about 3-4 hours to walk, from the start in the town of Ardales to the exit in Álora. The reception area at the start has a restaurant and several parking areas, and is also the final stop of the shuttle bus which runs between the north and south ends of the trail.

This is the starting point of two paths which lead to the control cabin and the Gaitanejo dam, where the official trail of El Caminito del Rey begins. The longer is 2.7 kilometres, starting from Sillón del Rey, a set of stone benches, table and chair once used by Alfonso XIII, or through the tunnel next to the restaurant. The other path is shorter, just 1.5 kilometres starting with a smaller pedestrian tunnel 200 metres before the restaurant.At the control cabin, personnel give visitors a protective helmet and check that their shoes are suitable. The viewing point on Gaitanejo dam has views of the cave dwellings of Sierra Parda, which were once home to the staff working at the hydroelectric plant. After reaching the walkways, the trail continues through the Gaitanejo gorge, the canyon known as Tajo de las Palomas, and the hanging bridge, Puente del Rey. The landscape gradually changes as you approach the Hoyo valley with its leafy woodland.

Next, the path enters the spectacular gorge of Los Gaitanes via walkways suspended 100 metres above the ground. The amazing sights on this stretch include a hundred-year-old juniper tree growing among the rocks, the “fossil beach” with Jurassic-period fossils, and a glass balcony which sticks out from the walkway, for those who feel they need to push their limits. The path continues onto the final stretch: after handing back your helmets in the control cabin, there is a 2.1-kilometre walk down the hill to the railway station at El Chorro.

As this is a linear, one-way trail, you will need to consider the time taken at the end of the walk to return to your starting point (about an hour) when planning times and distances.

If arriving by car, we recommend parking it in any of the designated parking areas and returning to it by the shuttle bus which run both ways between the northern entrance to the path, by the Guadalhorce dam (Ardales), and the southern end by El Chorro railway station (Álora). Another option is to walk back, although in this case you will want to consider the light and weather conditions, as you will have several kilometres to travel on a narrow road.If arriving by train, at El Chorro-Caminito del Rey railway station you can take the shuttle bus to the northern end to start the hiking trail, so you will need to account for this extra travel time. However, when you finish the Caminito, all you have to do is get on the train.

Both the town of Ardales and El Chorro station can be reached by car from Málaga (in about 50 minutes), Ronda (60 km away) or Antequera (55 km).El Chorro-Caminito del Rey railway station is on the Málaga-Seville line, with connections to other towns such as Ronda. The official website has helpful recommendations on routes, opening times, and how to get there.

In addition to a general visit completed at your own leisure, there is also the option of a guided tour to learn more about the region’s history, geography and biodiversity.It’s advisable to bring water, a snack (chocolate, nuts, fruit, etc.), or a sandwich. The characteristics of the trail, between tall cliffs on walkways and bridges suspended at a great height, will make the hardiest walker dizzy and it is definitely not recommended for anyone with a fear of heights.The stretch with the suspended walkways, between the north and south control cabins, is 2.9 kilometres long. The rest of the walk comprises mountain paths and forest tracks between the control cabins and the entrance and exit to the path.There is a tunnel running parallel to the walkways of the Desfiladero de los Gaitanes, which is an alternative to the aerial path on days when the wind and rain could cause mudslides. The tunnel is 300 metres long, of which 285 are inside and 15 are outside in the Hoyo Valley.

What else is there to do?

You can make the most of your visit and explore the districts of Guadalteba, Antequera and Guadalhorce Valley. If you fancy even more active tourism, there are many companies that organise water activities in the reservoirs nearby, or you can walk part of the Gran Senda de Málaga path. But if you prefer something more urban and cultural (or a dip in the sea, depending on the time of year), don't forget that the city of Malaga is less than 50 kilometres away.

Cangas de Onís, capital of the area of the same name, sits in the…

Antequera is a wealthy town, both culturally and economically.…

El Torcal is located between the city of Antequera and the…

Malaga has been experiencing a cultural upheaval in the past few…