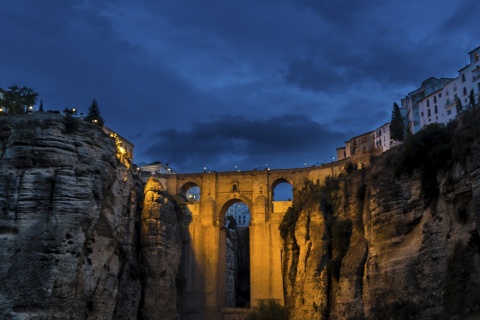 "View of the famous New Bridge in Ronda at night, in Malaga (Andalusia) "

This town in the Málaga region sits on either side of the Tajo del Ronda, a narrow gorge more than 150 metres deep. Its old town has been declared Property of Cultural Interest. Celts, Phoenicians, Romans and Arabs all inhabited these lands, which were reconquered by the Catholic Monarchs.

The historic quarter, reminiscent of the Arab age and with a medieval layout is scattered to the south of the Guadalevín, while more modern Ronda, the part which sprang up after the 16th century, unfolds to the north of the course of this river. Several bridges unite the two halves of one of the most interesting towns on the route of the Whitewashed Villages, in the heart of the the Ronda hills, only a few kilometres from the Costa del Sol.

The so-called “city of the castles” stands on a natural vantage point defended at its most accessible point by a citadel. It still preserves its walls and the most important gates which gave access to the city. The Almocábar Gate (13th century) provided access to the south side of the town, the Carlos I Gate dates from the 16th century, while the Exijara Gate led to the Jewish quarter. The old citadelOutstanding in these walled surroundings is the Gothic-Renaissance construction of the church of Espíritu Santo, ordered to be built by Fernando the Catholic to commemorate the reconquest of Ronda. Another major religious work is Santa María la Mayor, where Arab and Christian features combine. On the site of an old Roman temple, the Arabs built the Main Mosque of Ronda in the 13th century. Preserved from this period are the mihrab arch, decorated with stucco, and the minaret, transformed into a belltower. In the following centuries, its interior was enriched with Renaissance and baroque decoration, as can be admired in its Main Chapel, choir and altars. The Mudejar style, with stucco and horseshoe arches, can be clearly seen in the San Sebastián minaret, later used for Christian worship. Another Muslim legacy are the Arab baths, on the banks of the river. They date from the 13th century and are very well preserved.The civil architecture of Ronda is reflected in its ancestral homes and aristocratic small palaces. The palaces of Mondragón and of the Marquis of Salvatierra, and the House of the Moor are some of the delightful examples to be enjoyed. The first of the palaces was for centuries the residence of Muslim and Christian kings, and today it houses the city's Archaeological Museum. Outstanding in the former home of the Marquis of Salvatierra is a wrought iron balcony in the purest Ronda style. The House of the Moorish King, meanwhile, boasts Gothic-Mudejar decoration and some hanging gardens, declared to be an Artistic Garden. The Bandit Museum, the Hunting Museum and the Lara Museum are further attractions worth considering on this side of the Tajo de Ronda. The Arab, Old and New BridgesThree bridges span the ravine measuring more than 100 metres in depth and lead to the other side of the city. The Arab bridge was built in the 14th century and gave access to the Old Outskirts. The so-called old bridge is comprised of a single arch measuring some 10 metres across. But most emblematic of all is the New Bridge, a colossal feat of engineering which joins the neighbourhoods of Mercadillo and Ciudad. It dates from the 18th century and its foundations sit on the bottom of the ravine, at some points reaching 98 metres in height and 70 in length. The old City Hall, now the Parador de Turismo, stands on top of the cliff and is an exceptional place to relax and take in the views. Its chef prepares tasty local recipes such as stewed partridge, roast kid and almond soup. Among the desserts, Ronda's "yemas", honey pancakes and almond cheese are some of the suggestions.The Paseo de Blas Infante walk and the Viewpoint of the Catholic Monarchs, near the bullring (considered to be the oldest in Spain), are excellent spots to take in the landscape formed by the river Guadalevín. Outstanding in the most modern part of town is the church of Nuestro Padre Jesús and the Virgen de los Dolores Pavilion. The church is built in the Gothic style, with a prominent Renaissance belltower. The chapel of the Virgin, meanwhile, has an attractive series of mannerist sculptures which decorate its pillars.Ronda is lavishly decked out for its festivals, ideal occasions to come and enjoy this area. The Fiestas de Pedro Romero, with old-style bullfights and a flamenco festival, are a major event, as are Holy Week, the festivals in memory of the Christian reconquest and the Pilgrimage of Nuestra Señora de la Cabeza.The whitewashed villages, of Arab origin, in the Ronda mountains combine popular architecture with striking natural surroundings. Other towns, however, are famous for their Phoenician ruins (Jimena de Líbar) or Roman remains (Acinipo). A Moorish essence, among olive groves and vineyards, is the distinguishing feature of Algatocín or Atajate. The Ronda region is located in wet Andalusia, where the variety of vegetation makes for spectacular landscapes, such as the Sierra de las Nieves Nature Park, the Bermeja mountains or Sierra Crestellina hills. The Málaga coast is a step away, offering us a coastline where Benalmádena, Fuengirola, Marbella or Estepona are the most lively places for recreation. 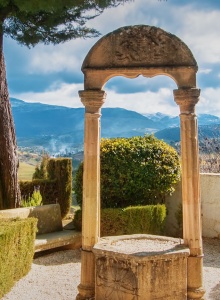 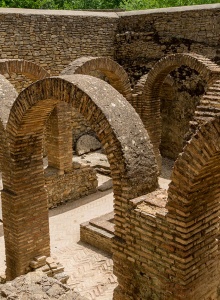 Palace of the Marquis of Salvatierra 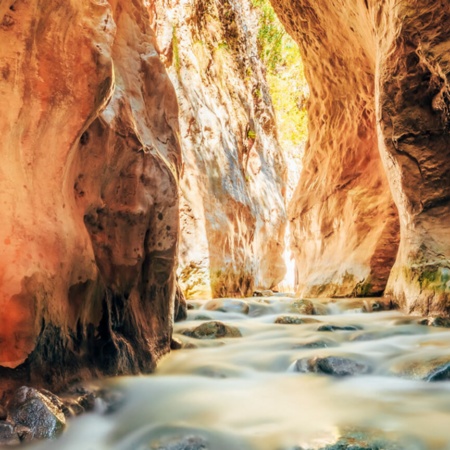 Four sustainable activities you can do near Málaga