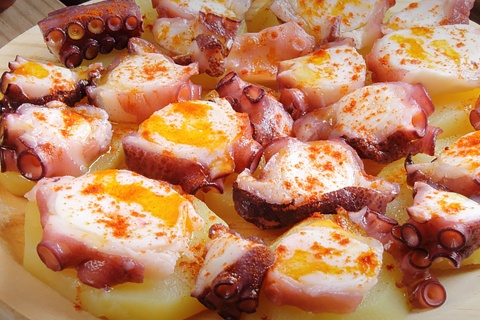 The cuisine of Galicia

Its cuisine is one of the main tourist attractions of Galicia: the exquisite delicacies of this region are based on the high quality and variety of the local products used in the preparation of dishes. Country, farm and sea products are unique in their characteristics and quality. Furthermore, it cannot be forgotten that one of the main pillars of Galician cooking is the professionalism of its experts. Galician chefs are found world-wide.

The importance of its gastronomy is manifested at the more than 300 gastronomic fiestas which are held in Galicia throughout the year. The origins of these exaltations to local produce, which arouse much interest in visitors, lie in the many local and regional traditional fiestas held during harvest time or religious holidays, such as the "romerías", where promises are made to the patron saint and then completed with a traditional meal. Some of these fiestas attract great crowds and have been recognised as of national tourist interest.

Traditionally Galicia, with its 1,200 kilometre coastline and countless sea ports and harbours, has always been a region where the sea is all important, one of the main activities of its inhabitants being that of fishing. Today, Vigo is the main fishing harbour in Europe and the Galician rias are the main producers of mussels in the world. Its exceptional coastline, formed of the highest cliffs in Europe, and the placid waters of the rias, together with the rich nutrients found in this part of the Atlantic Ocean, have given rise to a unique ecosystem which supplies the most exquisite culinary products. Barnacles from the coast which have been bashed by the strong Atlantic waves, crayfish, scallops, spider crabs, "nécoras" (small crabs), shrimps, "bueyes de mar" (large crabs) and lobster from the rias, together with the oysters, mussels, cockles, clams, octopus, cuttlefish, turbot, red bream, sardines, sargo (similar to bonito), sea bass and many other types of fish which populate the Galician waters. The centuries-old fishing tradition of Galicia has resulted in fish markets which offer the best variety of deep-sea fish, such as tuna, hake, cod, pollack and the delectable mackerel. Simple recipes for top quality products. This is the traditional cooking of Galicia: what really counts is the raw material.

If the coast is rich in produce, interior Galicia is no worse off Peppers with Denomination, such as those from Padrón, potatoes from Bergantiños, parsnip tops throughout the region; "Pan de carballo" and "cea" and corn. Nuts such as chestnuts, walnuts, hazelnuts and almonds; and we must not forget the wild and tasty mushrooms, the blueberries and forest honey. Vegetable dishes include Galician broth, made of green beans, chard, French beans, cabbage and parsnip tops, potatoes and haricot beans. The most important meat in Galicia is beef. It is eaten very young as veal, and the best animals bear the "ternera gallega" seal of quality. This meat is used to prepare hundreds of recipes, such as the exquisite sirloin steak, the popular "caldeiro" (type of stew) and "Galician cocido", made with potato and chickpeas. The visitor who prefers his meat well-done, must try Galician ox, which has crossed borders and been incorporated into the cuisine of other Spanish regions, such as the Basque Country. Another speciality is roast suckling kid, which is always present on the best tables and at celebrations. Furthermore, its poultry range includes the free-range cockerel and of course the famous capon, a free-range castrated cock which has been carefully raised and fed and is a speciality at Christmas. With regards its cheese, the majority are prepared using cow's milk. Galicia maintains Denominations for such cheeses as Tetilla, Ulloa, San Simón and O Cebreiro. Its cooked ham is used to prepare the typical ham with parsnip tops. Interior Galicia loves its sausages, the most important with regards originality being the "androlla" sausage and "botelo", which is smoked and then cooked. Its "chorizos" and "salchichones" (salami-type sausages) are of top-quality. Furthermore, other parts of the pig are used to make Galician stews such as streaky bacon, snout, the meat around the vertebrae, trotters, etc. Galicia also cultivates its own wine and boasts five different Denominations of Origin. The most famous of its liqueurs is the "aguardiente gallego", a high-proof distillate which is used to make the traditional mulled drink known as "queimada" (sugared "aguardiente" which is flamed). Coffee liqueur, cherry liqueur and herb liqueur.

Both sea and land

EMPANADA: The dish, which must be one of the most versatile that has ever existed, that unites interior Galicia with its coast is called "empanada" (filled pastries). "Empanada" can be stuffed with pork rib, meat, pork loin, beef loin, sardines, octopus, cod with raisins, bonito…almost anything you can imagine.

The seafood is a must, be in the form of a seafood platter or in dishes such as octopus a feira, stuffed scallops or clams prepared sailor style. For mains, we suggest a fish classic (cod with cauliflower) or a typical Galician meat based dish, lacón con grelos (pork shoulder with turnip tops). The most traditional Christmas desserts are the Santiago tart and the filloas (crepes), as well as a selection of marzipan and seasonal cakes made with chestnuts or apple. 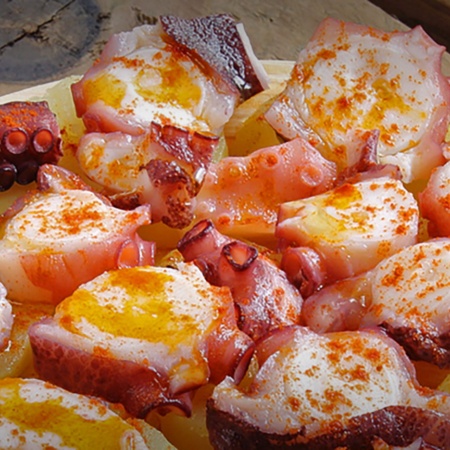