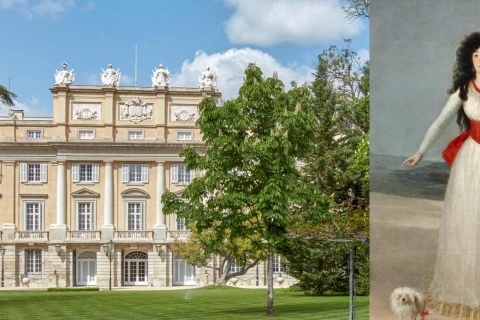 It houses one of Spain’s most important private art collections, the results of over 500 years of patronage and collecting by the Dukes of Berwick and Alba.

For the first time, the Liria Palace is opening its impressive collection of paintings, sculpture, tapestries, furniture, engravings, documents, books and decorative arts to the public.Some of its most notable paintings include Goya’s portrait of the Duchess of Alba, portraits of the Grand Duke of Alba by Titian and Rubens, and works by such masters as Velázquez, Zurbarán and El Greco. The tour of the Liria Palace also includes the library, with a first edition of Don Quixote (from 1605), the last will and testament of King Ferdinand II of Aragón, a collection of letters by Christopher Columbus, and the Alba Bible, which was one of the first Spanish translations of the Old Testament.A total of 12 rooms can be visited in the palace, which was built in 1767-1785. In the Neoclassical style, it was begun by the French architect Louis Gilbert and finished by the Spaniard Ventura Rodríguez. It is also notable as the only palace in Madrid still in use as a private residence, and one of the most important in Spain.Tours of the palace are sensory experiences, accompanied by music and dialogues of historic figures, so the conversations and activities of the past seem to come to life in each room. The musical excerpts were written in the palace itself by great composers such as Boccherini, Tchaikovsky, and Strauss.

These former military barracks were designed by the Baroque…

The Convent was founded thanks to Felipe IV, in the year 1650.…

This museum reflects the tastes of the period through a wide…

Discover the Debod Temple, one of Madrid's most unusual monuments.…

The building was owned by the banking family, Bauer.…

A Neoclassical-style garden in keeping with the Oriente Palace,…

The church has an ellipsoidal plan, built by the architect Pedro…

This museum houses an important collection which gives an idea of…