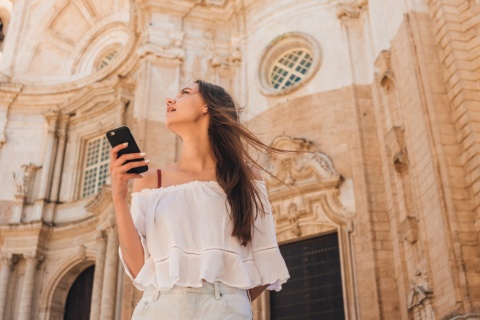 Tourist in the cathedral of Santa Cruz in Cadiz, Andalusia

Discover the secrets of the city affectionately known as the 'Tacita de Plata' ('the little silver cup').

It is said that this city in Andalusia is the most ancient in the Western world. In fact it was founded by the Phoenicians in 1100 BC. To really get a feel for Cadiz, you simply have to take a stroll along the seafront promenade, while you admire the spectacular golden dome of the cathedral, explore the narrow streets of the city’s traditional neighbourhoods like El Pópulo, tuck into a plate of pescaíto frito (little fried fish), and chat with the locals. We’re going to tell how you can experience the very best of Cadiz in just one day.

Morning is the time to discover some of the city’s most famous monuments, such as the Cathedral, before having a bite to eat in the Central Market.

After a good breakfast (for example you could stay overnight in the modern Parador de Cádiz and enjoy your breakfast while taking in the views over the bay), the best idea is to head straight for the most famous of the city’s monuments: the Cathedral. It combines baroque and neoclassical styles. If you want to get to know it in depth, why not take one of the tours that will give you access to little-known parts of the building, like the crypt. You could also visit the Casa de las Contadurías or the Clock Tower, from where there’s a magnificent view of the typical white towers of the city against the backdrop of the sea.

Afterwards, it’s time to take a stroll through the El Pópulo neighbourhood, the oldest in Cadiz. Access to the old medieval city is via three 13th century archways, known as El Pópulo, La Rosa and Los Blancos. You can wander through the streets, stopping off at places like the Plaza San Martín and the Roman Theatre, which dates from the 1st century BC. This way you’ll come to the wide, beautiful Plaza de San Juan de Dios, with its emblematic buildings like the one that houses the City Council.A 10-minute walk away you’ll find one of the most surprising places in the city: the Tavira Tower. The tower was built many years ago by the city’s merchants, who wanted to be able to see their ships and cargoes arrive safely. If you climb up the 173 steps, you’ll find yourself in what for many is the best viewpoint in all of Cadiz. And what’s more, it has a hidden secret, a camera obscura that’s sure to impress. Really close by stands the San Felipe Neri Oratory, where the first Spanish Constitution was drafted in 1812.

The final stop-off point before lunch is the pretty, triangular Plaza de las Flores, always so lively and colourful that you’ll feel like spending a good while there. You’ll find a range of cafés which have terraces where you can enjoy the typical Cadiz churros, and a few famous fried fish establishments. Although if you’re feeling hungry after a busy morning, the perfect place for a spot of lunch is right by you: the famous Central Market.This market was built in 1838, on the site of an allotment that belonged to an old convent. Despite having been totally refurbished, the architecture, and above all the explosion of life, are still impressive two centuries on. More than 100 stalls selling some of the world’s best fish, such as tuna and Barbate tuna, lots of different types of olives, pastries, and much more. You’ll really enjoy tucking into something delicious in the market’s Rincón Gastronómico, which serves up all kinds of international as well as local dishes at the outdoor tables.

The afternoon could be spent wandering through one of the city’s gardens, and discovering its castles.

After a good meal, a stroll through a garden is sure to appeal. Try the leafy green world of the Apodaca Poplar Grove, and look out over the sea as you walk, or head for the pretty Genovés Park, which is the largest green area in the old quarter, and take a seat by the lake. There’s even a waterfall.

Following the coast, you’ll come to Santa Catalina Castle, the oldest fortress in Cadiz, which offers unforgettable views of the Atlantic. And a panoramic view of the famous La Caleta beach, a great place for a refreshing swim. This beach, the only one in the city centre, is a must-visit if you’re visiting Cadiz, as it’s here that you’ll find one of the most idyllic picture postcard views of the city: the white of the Balneario de La Palma stands out against the sands, with the San Sebastián Castle in the background.

This 18th century castle stands on a tiny island that you can reach on foot via a long breakwater - a walk that’s a feast for the senses. By the way, did you know that La Caleta beach has appeared in films such as Die Another Day - one of the Bond series - in which actress Halley Berry takes a dip in its waters?Say goodbye to the day by wandering along the Avenida Campo del Sur seafront promenade while you watch the sun go down, with the Cathedral always in the background.

It’s dinner time, and time for a last experience that’ll leave you with good memories of Cadiz.

The tapas bars of Calle Zorillo are a brilliant option for dinner, and a great opportunity to try all sorts of different typical dishes. Calle San Félix, Calle La Palma and the Plaza del Tío de la Tiza in the La Viña neighbourhood are famous for the little fried fish known as pescaíto frito (be sure to try the shrimp omelette), and in summer one of the most typical of local dishes: mackerel with piriñaca (a mix of finely chopped tomato, peppers and onion with extra virgin olive oil and sherry vinegar).

In the evening you could also take a guided tour to discover the legends and mysteries of the city, or perhaps see at show at one of the Flamenco bars. 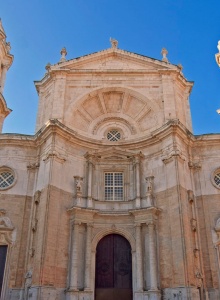 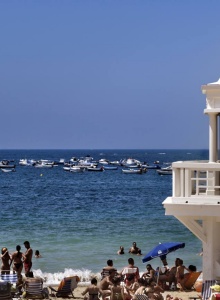 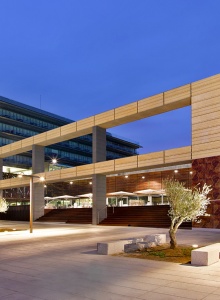 There are different guided and dramatised tours you can take that will help you to explore the city’s thousand-year-old history, and its many hidden corners.

As well as the La Caleta beach, outside the old quarter you’ll find other, less well-known beaches, such as Cortadura and Santa María del Mar. There’s also the very popular urban Victoria beach, which stretches for almost three kilometres, a broad seafront promenade, and a huge variety of restaurants.

If you’re spending more than one day in the city, you might like to visit some interesting museums such as the Cadiz Museum with its famous Phoenician sarcophagi, the Puppet Museum (especially if you’re travelling with children), or the Las Cortes de Cádiz Museum.

When to visit Cadiz

Any time of the year is good, as temperatures are always mild. If you’re looking to head to the beach for a swim, then summer’s always best. Cadiz celebrates the Cádiz Carnival, its biggest festival and the one with the greatest universal appeal, between the end of February and the beginning of March each year, making this a very special time to visit.

Especially beautiful are what are known as the Pueblos Blancos de Andalucía (the White Villages of Andalusia), so called because of their dazzlingly white houses, famous for being set in stunning natural surroundings. A car trip is the perfect way to discover them. The Doñana National Park is also located nearby. 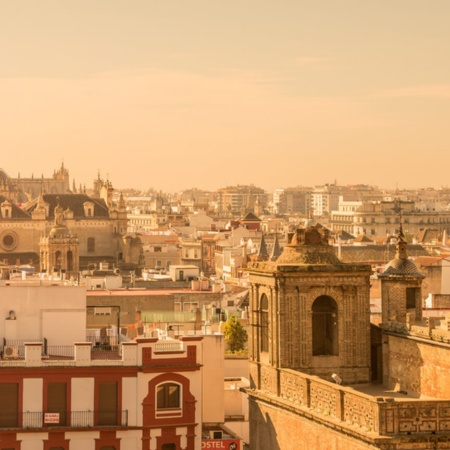 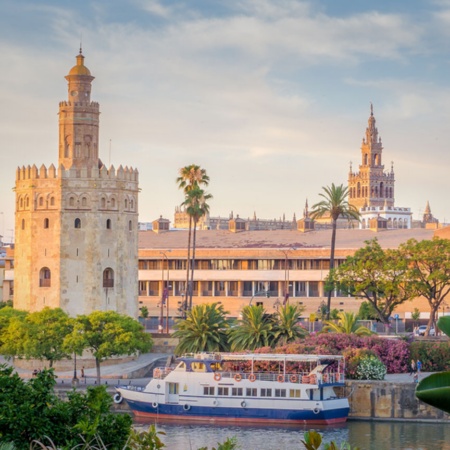 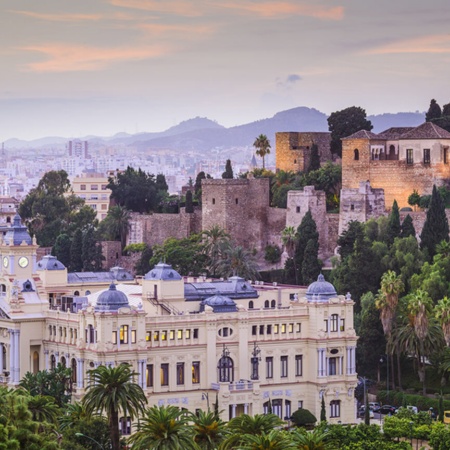