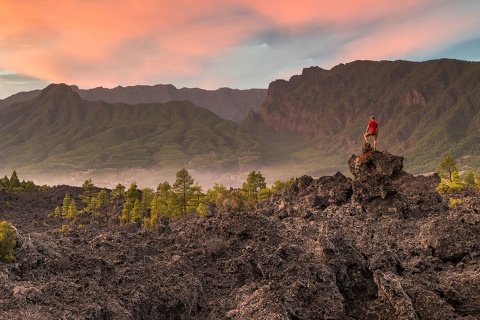 La Palma is a veritable showcase for the vegetation of the Canary Islands. Two nature reserves and the Caldera de Taburiente National Park are clear proof of the island's enormous natural wealth. La Palma was declared a Biosphere Reserve in 2002, and is a stargazing destination for the Starlight Foundation.

The lush vegetation, which is so characteristic of La Palma, is the reason that it’s also known as La isla bonita (the beautiful island). Despite its small size, the island is a true natural paradise, as it has two natural parks and a national park.The Caldera de Taburiente National Park marks the limits of an extensive area in the centre of the island where you'll find a spectacular crater, eight kilometres in diameter, and the great peak of Roque de los Muchachos. Myriad streams, springs and waterfalls drain the whole of the island, creating a lush, green landscape that’s home to an abundance of native species. In the park, you can find the Canary pine, resilient, strong, and secure to its steep walls. And some of these trees have lived long lives.The Las Nieves Nature Reserve, located in the north of the island, is home to the forest of Los Tilos, which was the first part of the island to be declared a UNESCO Biosphere Reserve in 1983. Here you’ll find one of the largest areas of laurisilva (a family of native species of trees and bushes that disappeared from Europe during the Tertiary Era) in the Canary Islands.South of La Palma, you find the Cumbre Vieja Nature Reserve, and its landscape is evidence of the volcanic nature of the whole of the island. Many populations of Canary Island pines, as well as firetrees, laurisilva and heather are to be found in the park. The thick forest covering the whole island is home to all sorts of wildlife, notably birds such as Bolle’s pigeon, chaffinches, sparrowhawks and blackbirds. It features one of the most popular walking routes on the island: the Route of the Volcanoes. Hoyo Negro, San Juan, El Duraznero, las Deseadas, San Antonio, Eñl Teneguía... will be your companions on this route of about eight hours through the island's history and geology. A beautiful path, it is one of the most popular on the island, and requires some level of fitness. It begins at the El Pilar leisure area and ends at the Fuencaliente salt pans, next to the sea, under the watchful eye not only of two lighthouses but also of the Teneguía volcano. Until 2019, this volcano has been the last to erupt (on land) both on the island and in the whole of Spain. In addition to breathtaking beauty, Las Salinas is a point of interest for science (passageway for migratory birds) and cuisine (the famous salt of La Palma is produced here). Not to mention its beautiful sunsets and the refreshing swim you can enjoy in a small cove at the end of the path.If you don't want to walk the full route, you can do it in sections, for example, go down from Los Canarios to the Fuencaliente salt pans.The outstanding ecological value of La Palma has been preserved, thanks to the use of traditional agricultural practices and a model for the development of sustainable tourism, factors that have also contributed to the its designation as a Biosphere Reserve.A new volcano on La PalmaLa Palma saw a volcanic eruption in 2021. A new volcano was born on "the beautiful island" within the Cumbre Vieja nature reserve. The island is still going back to normal by opening roads and completing other works. The new volcano of La Palma can be visited but only on guided tours. This 1.5-hour route allows visitors to get closer to its cone and get a panoramic view of the volcano and the lava flows it created on its way to the sea.Besides this path, you can get a view of the volcano from natural viewing points like the Fatima Monument, Plaza de Tajuya and the Caños de Fuego visitor centre. From the sea, you can go on a boat excursion to admire the strips created when the lava reached the coast. 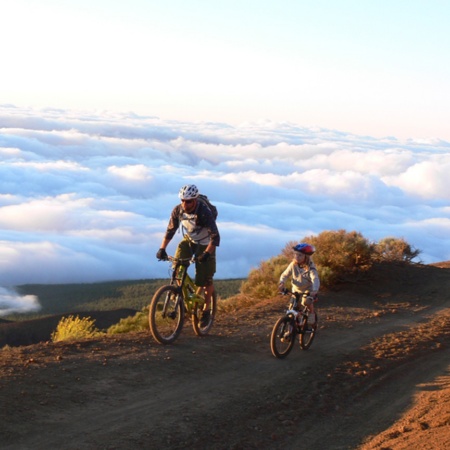