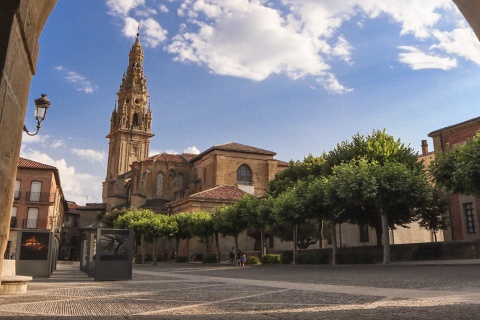 One of the Rioja towns most deeply marked by the Pilgrim's Route to Santiago de Compostela is Santo Domingo de la Calzada. Its network of medieval streets, declared a National Historic Interest Site, store a valuable heritage, particularly its walls, the Cathedral and the old Pilgrims' Hospital.

La Rioja's gastronomy, and above all the famous wines of the region, are some of the attractions the area offers, where it is also possible to visit the cradle of the Spanish language and the monasteries of Suso and Yuso, in San Millán de la Cogolla.

At the foot of the Sierra de la Demanda hills and the mountain of Yuso, Santo Domingo founded this town in 1044 to help the pilgrims who travelled to Santiago de Compostela in the Lower Middle Ages. The Pilgrim's Route to Santiago de Compostela, which has UNESCO World Heritage status, breathed life into the economy and culture of the lands it passed through and was closely linked to the spreading of artistic and cultural trends. The pilgrims who crossed the lands of La Rioja used to rest on the banks of the river Oja, in the forest of La Hojuela. It was here where Santo Domingo raised a bridge and built a shelter, a hospital and a hermitage, the origin of the town and city (a title awarded by Alfonso XI in 1334). Pedro I "The Cruel" is to thank for the walls which fortify its medieval layout, which has been declared a National Historic Interest Site. The original hermitage became a church dedicated to the saint, and was later consecrated as a Cathedral. This temple, located in the central Plaza del Santo, was begun in 1158 in the Gothic style, although it has elements of Romanesque origin, such as its main front and apse, and others which are baroque or Renaissance in style, such as the slim free-standing tower. Inside the cathedral, a beautiful main reredos in the plateresque style and the tomb bearing the Romanesque carving of the saint stand out.As well as the chapels, the choir and the cloister, a hen coop draws the attention, a reminder of a miracle which took place in these lands. The popular Spanish saying “Santo Domingo de la Calzada, cantó la gallina después de asada” is a reference to the miracle by which a cock and a hen were revived to prove the innocence of a young man who was wrongfully hanged and who survived his sentence.Opposite the Cathedral is the old Pilgrims' Hospital, now a Parador de Turismo. The original structure, from the 12th century, was erected by Santo Domingo to take in pilgrims making their way to Santiago de Compostela.Stretching out from the Plaza del Santo is a harmonious collection of Romanesque, Gothic, Renaissance and baroque buildings. The emblazoned houses of the calle Mayor, the City Hall and the convent of San Francisco are the major points of interest. The Saint's house, a Pilgrim's Route to Santiago de Compostela information office, is also worth a visit. Its facilities provide all kinds of information for continuing on the Pilgrim's Road, or returning towards Logroño and Navarre.Gastronomy and surrounding areaThe Ebro river basin provides the Rioja dining table with all manner of fruit and vegetables. Asparagus, peppers, artichokes and other vegetables are the staples of such dishes as potatoes "a la riojana" or vegetable stew. Also famous are the lamb cutlets with vine shoots (roasted over a sheaf of vine shoots). Outstanding among the sweets are the "fardelejos" (with almonds, eggs and sugar), the marzipan (baked almond and sugar paste) or pears in wine. These lands sown with vines produce one of the most esteemed wines in Spain, Rioja, with its own Designation of Origin standard. Whites, rosés and especially reds accompany and form part of this rich gastronomy. From Santo Domingo de la Calzada we can travel to major points in La Rioja province. Located on the banks of the Ebro, Haro is the wine “capital”. A town sown with vines where the Wine Battle is held each 29 June. Some of its many cellars offer tastings on these days. San Millán de la Cogolla is home to the monasteries of Suso and Yuso, both declared World Heritage Sites. The Route of the Spanish Language begins here, since the first written evidence of Spanish appeared in these monasteries. This route continues on to the Monastery of Santo Domingo de Silos (Burgos) and cities such as Valladolid, Salamanca, Ávila and Alcalá de Henares. Located near San Millán is Berceo, birthplace of Gonzalo de Berceo, the first author in Spanish. At the foot of the Sierra de la Demanda mountains is the peak of San Lorenzo (2,262 m), the Ezcaray National Game Preserve and the Valdezcaray ski resort. The leisure possibilities on offer are rounded off with hiking routes or routes on horseback around the area, or a visit to the town of Nájera. In the 11th century, it was the seat of the court of Navarre and King Sancho III altered the route of the Pilgrim's Route to Santiago de Compostela so that it passed by here. The monastery of Santa María la Real its its chief monument, with Gothic and plateresque features. Its royal pantheon houses the tombs of more than 30 monarchs. 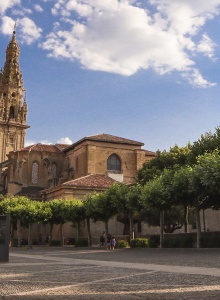