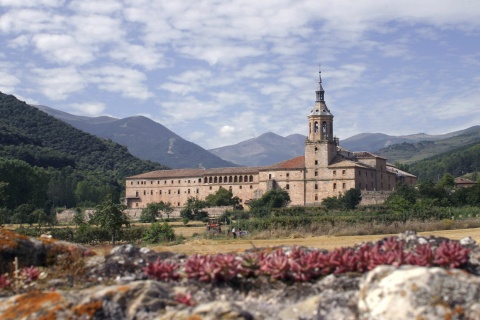 In the middle of the Cárdenas river valley sits San Millán de la Cogolla, a Rioja town founded by the saint of the same name and linked for centuries to the Pilgrim's Route to Santiago de Compostela.

The deep-rooted monastic tradition of the town can be seen in the beautiful collection of historic buildings it houses, where the Monasteries of Suso and Yuso, both declared World Heritage Sites, are outstanding. The importance of San Millán de la Cogolla is also due to its status as the cradle of the Spanish tongue, since the first documents written in this language are preserved here.

The origin of San Millán de la Cogolla is closely-related to the deep-rooted monastic tradition of the place. It was here where, around the 16th century, San Millán sought spirtual refuge in a hermitage dug from the rock. The cultural and religious significance which this monastic community attained during the Middle Ages was such that it attracted crowds of pilgrims who strayed from the Road to Santiago de Compostela, and who still do today, to head for this place.The passing of the centuries has left this traditional Rioja town the beautiful collection of historic buildings formed by the Monasteries of Suso and Yuso. Both, declared World Heritage Sites, have major historical significance, since the first texts written in Spanish are preserved in them.The Monastery of Suso was initially built in the 6th century, although it was extended on successive occasions until the 11th century. This fact can be seen in the superimposition of artistic styles present in the building, which goes from its Visigothic core to the Mozarab style and the subsequent Romanesque work.Inside the monastery, in addition to a lovely cloisters, there are the stone-carved tombs of the Seven Infantes of Lara along with their teacher, as well as those of three queens of Navarre.The church, built in the Mozarab style at the end of the 10th century, still has some remains of the original monastery. Outstanding among them is a sculpture of the saint in one of the Visigothic vaulted niches, as well as a necropolis with dozens of stone sarcophaggi belonging to the community of hermits. The last extensions to the church were carried out in the 11th century, incorporating Romanesque features. Falling within this style is the recumbent sculpture of San Millán (12th century), an alabaster piece which depicts the figure of the mystic together with several followers and pilgrims.Located at the end of the valley, the Monastery of Yuso dates from the 11th century, with subsequent remodelling in the 16th and 18th centuries.An equestrian sculpture of San Millán dominates the building's main front, executed in the baroque style. The church, built between 1504 and 1540, houses a medieval reredos (12th century), as well as a plateresque pulpit and a choir in the Graeco-Roman style.One of the jewels of Yuso is the sacristy, rococo in style, which has alabaster floors and frescoes. This splendid 18th-century room has an interesting artistic collection, outstanding among which are several paintings by Juan Rizzi, the chest bearing the relics of San Millán (11th century), decorated with ivory plaques, gold and precious stones, and the chest of San Felices (11th century), with Romanesque bas-reliefs carved in ivory. Other sections of the monastery are the Salón de los Reyes, the cloisters and the library, whose collection contains some 300 medieval documents. Its codex collection can also be admired, particularly the Glosas Emilianenses, 12th century manuscripts in which the first written evidence of the Spanish and Basque languages appears. The importance of San Millán de la Cogolla as the cradle of Spanish was reinforced in the 13th century, since it was there where Gonzalo de Berceo, the medieval writer and poet whose compositions raised this language to the category of a literary tongue, lived and was educated.On the streets of San Millán de la Cogolla, the visitor can find houses built in the traditional style of the region, as well as other buildings such as the hermitage of Santa Potamia, from the 18th century, and the church of Nuestra Señora del Carmen (18th century), located in the small village of Lugar del Río.Gastronomy and surrounding areaThe gastronomy of La Rioja has its greatest asset in the produce of the region's rich soil. Vegetable stew, potatoes "a la riojana", lamb cutlets with vine shoots or stuffed peppers are some of the specialities of the region. The wines of La Rioja, meanwhile, protected by their Designation of Origin standard, enjoy recognized prestige.San Millán de la Cogolla is a few kilometres from the Pilgrim's Road to Santiago de Compostela on its passage through La Rioja. Leaving Logroño behind, the French Road cuts through Navarrete and Nájera, a place to admire the Monastery of Santa María la Real.Santo Domingo de la Calzada is the last great staging post of the Pilgrim's Road in La Rioja. Outstanding in this well-cared for town are its walls, its Roman road and the Cathedral of San Salvador. A large number of religious buildings were erected along the La Rioja leg of the Pilgrim's Road to Santiago de Compostela, giving rise to the name of the Route of the Monasteries, which, passing through San Millán de la Cogolla, takes in the towns of Santo Domingo de la Calzada, Ezcaray, Bañares and Cañas.Suso and Yuso are on the Route of the Spanish Language, which passes through towns which played a decisive role in the history and evolution of culture in Spanish : Santo Domingo de Silos, Valladolid, Salamanca, Ávila and Alcalá de Henares. 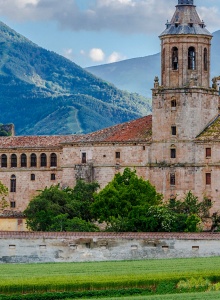 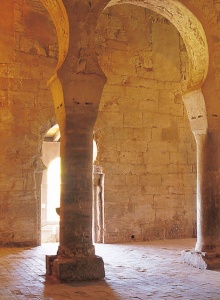