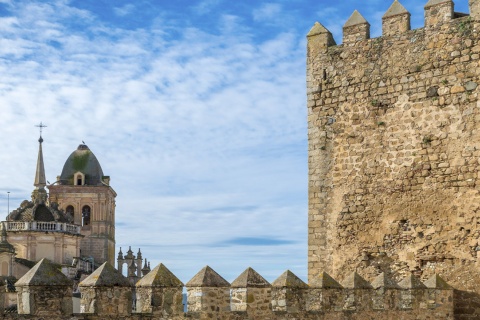 A city in Badajoz where many different cultures, knowledge and artistic styles overlap, from prehistoric times to Gothic and Baroque.

It is surrounded by meadows with excellent pasture for stockbreeding, the base of the local economy. Its old town has been declared Property of Cultural Interest.

The origins of Jerez de los Caballeros date from the time of the Phoenicians, although it has always been inhabited by the various cultures who arrived on the Peninsula. The oldest archaeological finding in the area is the dolmen at the Granja de Torriñuelo, declared a National Monument and beside which were found paintings and an interesting burial treasure. Roman villas, Visigothic remains and Arab influences all form part of the landscape in this area which lies halfway between Portugal and Andalusia, and this cultural diversity can also be found in many of its traditions and customs. But Extremadura has always been the cradle of explorers and conquistadors; specifically, Jerez de los Caballeros was the birthplace of the first European who laid eyes on the Pacific Ocean, Vasco Núñez de Balboa. After the colonisation of America, many nobles and public officials returned to the land of their birth bringing with them riches from the New World. Thus the historic quarter of Jerez de los Caballeros combines both popular architecture with ancient churches, convents, noble houses and mansions, all presided by the imposing Templar fortress with its Arab origins.

The walled perimeter of Jerez de los Caballeros extends for one and a half kilometres. It is built of masonry work and stone blocks (15th-16th centuries) on top of the original Arab walls, and is reinforced by defensive turrets and towers. Several of its gateways still survive, and contains on the interior a 13th-century Templar castle which was reformed in the 16th century. Interesting religious buildings include the churches of La Encarnación (16th century), San Bartolomé (15th-17th centuries), San Miguel (16th-18th centuries) and Santa Catalina (16th century), as well as the convent of San Agustín, today the site of the Town Hall. Outstanding examples of civil architecture are the Casa del Concejo building (16th century); the hospitals of San Bartolomé and La Caridad, and the palaces of Bachiller Martínez de Logroño, Marquis de la Lastra, the Guzmanes and the Dukes of T'Serclaes-Tilly. Narrow streets with whitewashed façades dotted with stone towers are the backdrop for the religious processions which take place during Easter week, a festival which has been declared to be of Regional Tourist Interest. The religious images, which are the object of veneration in the churches, are paraded through the streets to fervent acclaim from hundreds of participants. Another excellent time to visit Jerez de los Caballeros is during the Iberian Ham Fair. For a few days, the products labelled with the Designation of Origin 'Dehesa de Extremadura' vie with each other to offer the best cured hams and sausages produced with acorn-fed Iberian pork. This gastronomic tasting session might continue with tomato soup, roast lamb or lamb stew, and different types of cheeses. All the dishes are made with the delicious local olive oil. And an excellent accompaniment to these mouth-watering delicacies is the wine from the Designation of Origin 'Ribera del Guadiana'. 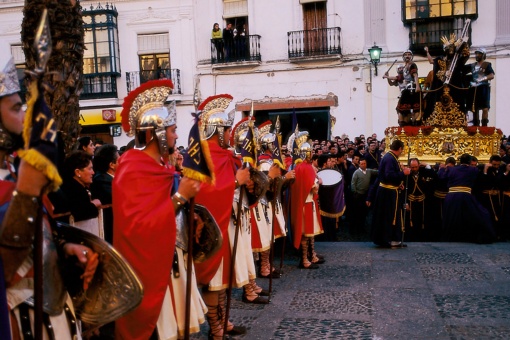