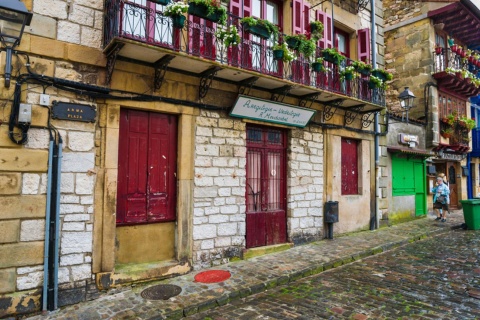 Streets of Hondarribia in Guipúzcoa (the Basque Country)

Standing at the mouth of the River Bidasoa, Hondarribia is a town on the Guipuzcoa coast with a long seafaring and tourist tradition.

Its walled old town, full of aristocratic buildings, has been declared a Historic Artistic Site.

According to the tradition, Hondarribia was founded by the Visigoth King Recaredo in the 6th century AD. The name of the city appears mentioned for the first time in the town charter the Navarrese king Sancho el Sabio (the Wise) granted to San Sebastián in 1150. Also during the Middle Ages, Hondarribia was granted the same privileges as San Sebastián by the Crown of Castile. Throughout its history, the city suffered various sieges, the most famous of them in the 17th century. Its position as a military emplacement above the estuary of the River Bidasoa led in the past to a town centre bounded by solid walls, which are still preserved and have enabled it to be declared a Historic Artistic Monument.

In the highest part of the town is the Plaza de Armas. On one of its side stands the Castle of the Emperor Carlos V, a stone fortification which today houses the Parador de Turismo. Opposite it, the traditional Alarde takes place every September, one of the most important events on the town's festive calendar. Very nearby is the parish church of Santa María de la Asunción. The church was built in the 15th century in Gothic style, while its Baroque tower dates from the 18th century. Along its cobbled streets appear many emblazoned houses and palaces. Once you have passed through the Gate of Santa María, in the southern stretch of wall, you reach one of the busiest streets, the Calle Mayor. Here the great Baroque façade of the Town Hall (18th C. draws your attention. It has two coats of arms of the city and large series of arches. Almost opposite the Town Hall, in the same street, you can see the Casadevante Palace, a 17th century aristocratic building in the Baroque style. The Zuloaga Palace, which has a magnificent stone staircase, and the Casa de los Guevara, from the 18th century, complete this area. Outside the walled city, the district of La Marina lies beside the sea. This seaside centre, possible the oldest in the town, offers Hondarribia's most popular atmosphere. Its streets, especially Calle San Pedro, are full of typical colourfully painted seaside houses and are an ideal place for a walk or an aperitif. Hondarribia also has a long tourist tradition. Its wide beach is one of the main attractions for visits who come to the town during the summer. On it, you can practise a wide variety of water sports: swimming, diving, windsurfing, jet-skiing etc. The beach divides the district of La Marina from the fishing point, the starting pint for trips to the Castle of San Telmo (16th C.) and the Higuer lighthouse, where you can get beautiful views of the coast. Without going outside the municipal boundary, in the unusual natural environment of the Monte Jaizkibel, is the Guadalupe Fort. This imposing defensive bastion is very near the Hermitage of Guadalupe, a chapel built in the 16th century to worship the Virgin. This hermitage takes on a specially important role during the festival of the patron saint of Hondarribia, which is held at the beginning of September. On these dates a great procession of inhabitants of the town comes to the sanctuary. This religious act takes place within the framework of the popular Alarde, through which the residents commemorate the great victory of the city's forces after a siege, which happened in the 17th century, because of a vow made to the Virgin of Guadalupe in 1639. The Alarde includes impressive parades through the streets and squares of the old town, always with drums banging and gunpowder being let off.

The province of Guipuzcoa offers a coastline with excellent beaches and picturesque villages. Opposite Hondarribia is Irún, a lovely border city whose historic centre is presided over by the church of Juncal (16th C). It is also worth going to the Plaza de San Juan Harria, where the Baroque City Hall stands. A few kilometres away is San Sebastián, the capital of that province. This elegant city - a traditional summer holiday resort - extends around a bay between two hills, Urgull and Igeldo. The symbolic La Concha beach, smart new suburbs and an intense cultural life make this city one of the most attractive on the Cantabrian coast. Other coastal towns that combine interesting monuments with extensive beaches are Zarautz, Getaria, Deba and Mutriku. As well as this wealth of monuments, this Basque province has a valuable natural heritage in which the Aitzkorri, Aralar, Aiako-Harria and Pagoeta Natural Parks are outstanding. One of the best ways of approaching Basque culture is through the cuisine. Hondarribia is the perfect shop window for discovering the most representative local recipes. The fish that arrive on the coast are used to make dishes like "kokotxas" of hake in green sauce, grilled red bream, "marmitako" (stew with tuna and potatoes) or txangurro (spider crab). The vegetables and excellent meats from inland contribute to enriching the province's culinary tradition. As for wines, there is nothing better than a chacolí from Guetaria/Guetariako Txakolina, with its own Denomination of Origin. 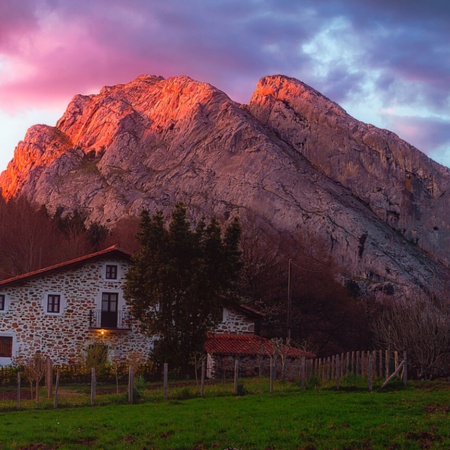 Enjoy nature: a holiday in a country cottage in the Basque Country