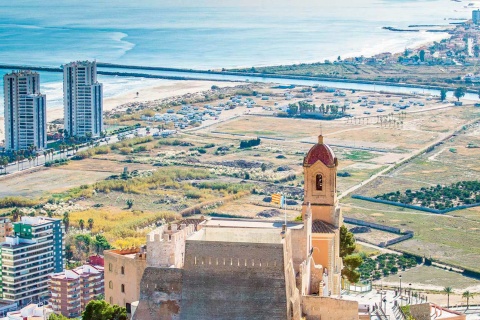 The Mediterranean town of Cullera is located in the centre of the Valencian coast, tucked away between the sea and the mountains.

Around the Muntanya de l'Or and the estuary of the river Júcar, a summery resort has grown up, featuring both a well-cared-for old town and the most modern installations and leisure developments for making the most of the sun and beach. Valencia, the Albufera Natural Park, historic villages and countless beaches are just a few of the many attractions this coast has to offer. Don't miss the exquisite Valencian cuisine, in which rice comes together with offerings from the sea and orchards to create delicious dishes.

The quality of Valencia’s waters and the pleasant year-round temperatures make Cullera an ideal destination for those who want to enjoy their leisure time by the Mediterranean. Well-connected with Madrid and Barcelona, Cullera is a very appealing destination for any kind of traveller. Here, visitors can practise water sports, diving or hiking, as well as strolling through its old town or simply swimming in and sunbathing by its calm waters. Its marina is another place which deserves a visit.

Orchards and orange groves cover the hills surrounding a coastline of shallow waters, perfect for even the youngest travellers. The variety of their ecosystems and installations are what make the beaches of Cullera stand out. Faro beach is the best for diving and fishing, while San Antonio beach is right next to the promenade. Marenyet, meanwhile, is the local nudist beach.There are over 15 kilometres of beaches and cliffs in total sheltering below the l'Or mountain, which is also known as les Raboses. This area is also surrounded by freshwater lagoons, such as the remarkable l'Estany lagoon. Here, recreational fishing enthusiasts can enjoy their favourite activity and sample some of the delights served up in nearby restaurants.Paella (meat, seafood, vegetable or mixed), arroz a banda (cooked in fish broth and served with ali-oli) or arroz negro (with squid ink) are some of the area's specialities. Mediterranean fish are baked, fried or served in stews, while meat from the mountain range is cooked on grills. Chicken and rabbit are much-valued in this region, and are prepared in many different ways. When it comes to desserts, the Valencian orange is king. And to accompany all this delicious food, Cullera produces Valencia and Utiel-Requena wines, both of which have been awarded a Designation of Origin. Horchata, a soft drink made out of tiger nuts and which also has a Designation of Origin, is worth a try too.A visit to Cullera also offers the chance to see rich historical-artistic heritage, with two particularly outstanding buildings. The medieval Castle and the neo-Romanesque Mare Deu del Castillo shrine are located at the highest point in the city. This strategic location at a natural vantage point looks out over the coastline and the surrounding region. Santa Ana shrine and the Reina Mora Tower round off this beautiful complex. On the other side of the mountain, the Cullera lighthouse and Dragut cave await visitors. This cave museum houses a gothic chapel extended in the 17th century.

Cullera also gives visitors the chance to get to know important locations in Eastern Spain. Valencia, the capital of this region, combines a rich artistic heritage with an urban layout full of parks and green spaces. Among its wide range of cultural attractions are the City of Arts and Sciences, the Valencian Institute of Modern Art (IVAM) and the Valencia Silk Exchange, declared a World Heritage Site by UNESCO. The nearby Parador de El Saler hotel provides travellers with unbeatable facilities.Situated to the south of Valencia, the Albufera Nature Reserve is one of the largest wetlands in the world, and a Special Protection Area for Birds. It is of the utmost importance as its unique location provides four different habitats: the Restinga or sand bar, formed of mobile dunes and small salt marshes; the Marjal, the marshy area; the Albufera lake, the heart of the nature reserve; and the Mountain. The water in the Albufera reaches the sea by crossing a strip of land via three channels. Each of these areas has its own characteristic vegetation. Birds, fish and molluscs rule the Park. Lots of different walking and cycling routes take us to the best observation points.And to get to know the inland areas of the province, you can't beat a trip to Játiva/Xátiva or Alzira, cities whose old towns feature medieval castles and palaces, gothic churches and fascinating museums where you can learn more about their history. 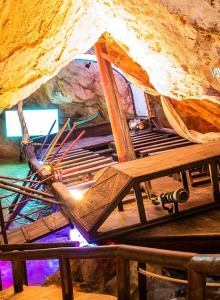