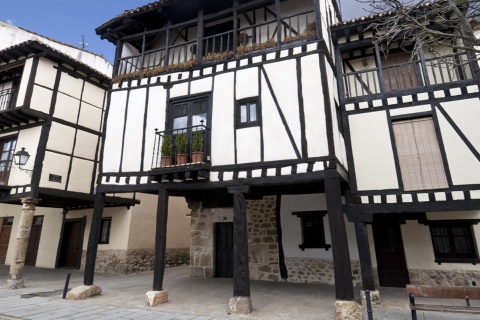 Covarrubias owes its name to the reddish caves that abound in its outskirts. The city centre, which has been declared Property of Cultural Interest, is a wonderful example of typical Castilian urban layout, with arcaded streets, and houses that have wooden structures.

The entrance to the old town is under the arch of the Castile Archive, where Philip II's coat of arms can be seen on the façade. Before walking under the arch, look at the 16th-century Gothic cross in front of the archive. A stroll through the old town will also allow you to discover the features of the typical Castilian architecture: ground floor made of stone, arcade, intricate wooden framework and upper continuous balcony. The house of Doña Sancha is one of the best examples.

Some of the monuments that stand out are the Church of Santo Tomás, with its altarpieces and Renaissance pulpit; and the Gothic Collegiate Church of San Cosme and San Damián. Under the altar lie the remains of three abbess-princesses, and in the presbytery, those of Count Fernán González and his wife Sancha, the latter buried in a 4th-century Roman-Spanish sarcophagus. The cloister dates from the 16th century, and the museum, which the visitor should not miss, keeps one of the most beautiful Gothic-Flemish images: a 16th-century triptych of the Adoration of the Magi. Nearby you can find the remains of the old walls, as well as the Doña Urraca Tower, a 10th-century Mozarabic construction.