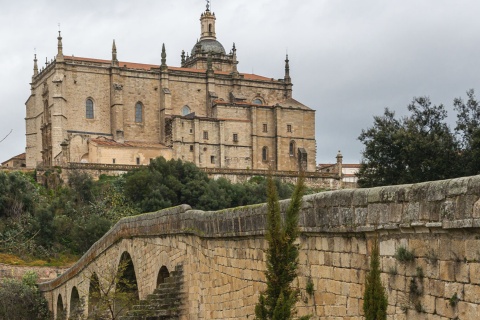 The stone bridge, a civil architecture project from the Renaissance, stands over a riverbed that is dry since 1590, when the Alagón river was naturally diverted from its course as a result of a powerful flood.

Coria's past is Roman and Arab. Its walls, with 20 square towers and four gates, are a magnificent example of Roman defence architecture from the 2nd though 4th centuries, preserving still some of their original funerary steles on them. The 15th-century castle still has its keep standing, as well as the "castillejo", a bastion. The cathedral was built in a variety of styles, given the long time it took to complete, which began in the 15th century in Gothic-Renaissance style. A few kilometres away we find the high seminary, a 17th-century building that preserves the remains of a Roman funeral monument.

Another outstanding buildings from the town's monumental heritage are the 15th-century convent of Madre de Dios (Mother of God), located within the confines of the wall; the episcopal palace, built in 1626; the church of Santiago, from the 16th century, with a Mannerist reredos, and images from the 16th to the 18th centuries; the royal prison, present site of the City Museum; the ecclesiastical prison, built in 1760; and a botanical garden in the outskirts. 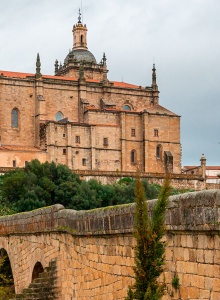