The Easter Week commemorations in this town are particularly famous for the magnificent floral decorations adorning the religious statues. In Cartagena there is a marked 'rivalry' between the two main religious brotherhoods, the marrajos and the californios. The origins of the first brotherhood dates back to the beginning of the 17th century –they can be recognised by their purple robes–, while the second was founded in 1747, and wears red.

The processions take place over ten days and have some unique features, such as the lavish floral decorations on the 'pasos' (the floats bearing the religious images) and the fact that the story of Christ's Passion is represented in chronological order. The penitents are also unusual: most of them are children, with their faces uncovered, and they distribute mementos of the different brotherhoods and sweets among the crowd. Almost all the processions take place at night, and most start and finish at the church of Santa María de Gracia.

One of the most moving moments takes place right at the door of this church, at the conclusion of the processions and the entrance of the Virgin Mary, when thousands of people raise their voices in the 'Salve Popular Cartagenera'. Among the most popular processions are the Virgin of La Caridad, the Traslado de los Apóstoles, the Prendimiento and the Santo Encuentro. You can watch them comfortably seated, or else along different sections of the route, moving from one to the next on parallel streets. The price of the seats varies according to the area and the day, and they can be hired from the booths set up in the squares of Plaza de San Sebastián and Plaza del Icue, and on Calle Aire. Some parts of the route are particularly recommended as the complicated manoeuvres required at these points makes them especially spectacular –this is the case of Calle Jara, at the convergence of the streets of Calle Aire and Calle Cañon, and at Calle Cañon and Calle Mayor, and at the entrance to the church of Santa María. If you want to take home a souvenir, you can buy the insignias of the different brotherhoods and typical festive sweets known as 'sepulcros' at the stalls in Calle San Miguel.

Easter Week is one of the most spectacular and emotional festivals in these parts. Religious devotion, art, colour and music combine in the acts to commemorate the death of Jesus Christ: the processions. Members of the religious brotherhoods, dressed in their typical robes, parade through the streets carrying the floats known as 'pasos' bearing religious images and accompanied by the beat of drums and music, creating scenes of solemn beauty. 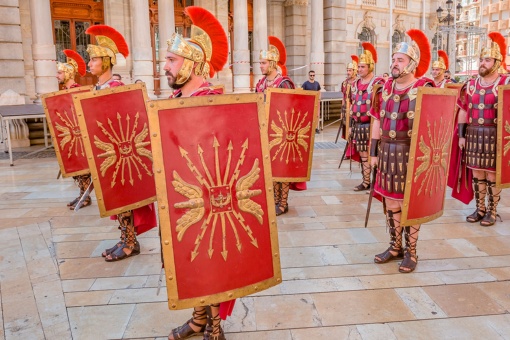