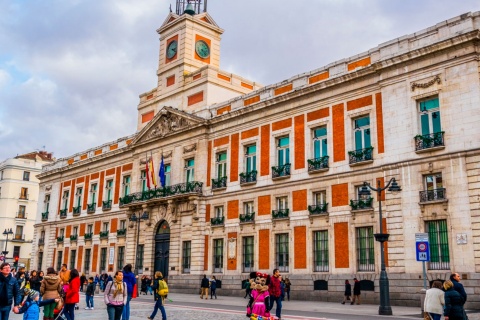 This impressive 18th century building (constructed between 1766 and 1768, during the reign of Charles III) is an outstanding monument in Puerta del Sol Square. It is currently home to the Regional Government of Madrid, although it was originally the Post Office building. Designed by French architect Jacques Marquet, it has a rectangular floor plan and there are two large patios in the interior. The façade is in white stone and brick, with a large main central doorway with balcony above, and a high relief with Charles III's royal coat of arms.

The central tower, topped by the famous clock that chimes in the New Year every 1 January, was installed a century later, in the 19th. This building has witnessed great historical events first hand, such as the War of Independence with the French army, and the proclamation of the 2nd Republic in 1931.

In front of the building, Kilometre 0 is marked on the ground. It is from this point that all Spanish radial roads are measured and where Madrid's street numbers start.

The Puerta del Sol is one of Madrid's main hubs.…