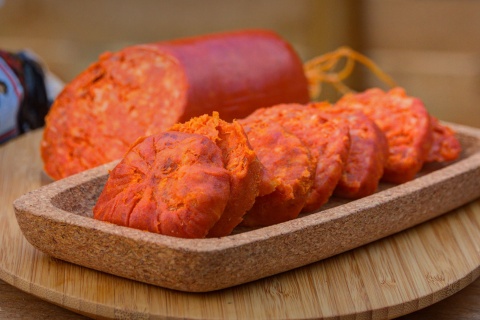 The cuisine of the Balearic Islands 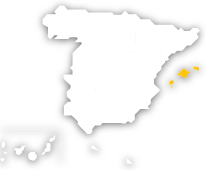 The Balearic Islands, a sensory pleasure

The gastronomy from Majorca, Menorca, Eivissa·Ibiza* and Formentera is comprised of many delectable and pleasurable dishes. The cuisine takes full advantage of the islands' resources and the many cultures which have passed through the archipelago over the years have left their mark: many different civilisations (Greeks, Phoenicians, Romans, Arabs, French, English...).

Any tourist that visits the Balearic Islands in February will be able to enjoy the incredible beauty of the almond blossom. The nut of these trees is an essential ingredient in the traditional cooking of the islands, together with bread, olive oil and the two types of tomatoes - those which are irrigated and those which are called "ramallet". These are braided together into bundles and hung up to dry in the open air, and when combined with other ingredients, make very tasty starters, breakfasts or suppers. The "Queso de Mahón", a cheese with Denomination of Origin of the same name because Mahon was the port from which it was exported. However, this cheese can be produced in other parts of Menorca.

The potatoes from Sa Pobla, sweet peppers, the wild carrots and other local products are becoming more and more well-known. However, we mustn't forget the seafood and meat which are the bases of Balearic food. The important fishing and agricultural activity that was carried out on the islands before tourism set is reflected in their traditional dishes. Pork and spiny lobster are the main specialities. The islands also have excellent sausages, especially the typical and well-known "sobresada"(named after the protected area Sobrassada in Majorca). The fish is delectable and very varied and is often used to prepare stocks and soups. The visitor to the Balearic Islands will be able to taste dishes such as the fish soups (the islanders use whitebait a lot in their cooking), rabbit with onion, duck with olives and the magnificent cocas - local cakes which can be either sweet or savoury. The traveller must not miss the opportunity to try a dish of rice with spider crab or the famous scorpion fish with fine herbs or even a plate of winter soup when the weather so requires. A true Menorcan luxury is the spiny lobster stew as a starter, which is so good that it is usually repeated as the main course. All the islands have their own dishes.

A meal is never complete if it is not finished off with one of the splendid local desserts. There are many to choose from: baked cottage cheese is the main milk pudding and another favourite is the "coca de albaricoques" (apricot cakes). But we mustn't forget the very traditional "ensaimadas" (spiral shaped pastries which are officially named Ensaïmadas de Mallorca) which are famous world-wide, or the small sponge cakes called "quartos", "rubiol", "crespell", "flaó" and "gató de almendra".

Traditional liqueurs are normally served with these delicious desserts or sometimes even as a drink before the meal, especially the Majorcan Palo liqueur (made from the carob fruit and with the geographic denomination Palo de Mallorca), the Herbes Mallorquines (made with herbs), Menorcan gin (Geographical denomination Gin de Menorca), the Herbes Eivissenques (also made with herbs and with the geographical denomination Herbes Eivissenques) and Frígola (mainly thyme).

With regards wine, the Balearic Islands currently have two Denominations of Origin: Binissalem and Pla i Llevant de Mallorca. Wine has been cultivated on the islands for thousands of years and the red wines tend to be more popular that the whites and rosés. The geographical denomination Vins de la Terra d'Eivissa protects the production of the popular wines made on the Island of Eivissa (Ibiza).

Christmas food in the Balearic Islands

The Christmas table could include a cream of almond soup or a Christmas soup with meat-filled pasta, Mahón cheese, seafood, stuffed turkey and sweet treats made from honey and almonds. The most traditional fillings include Christmas escaldums (turkey with dates, plums, tomatoes and even sobrasada). For dessert, try the delicious nougat flatbread, toffee almond, burnt egg yolk cake and the Minorcan cuscussó (a sweet mix that is often used as a stuffing for the capon or turkey).