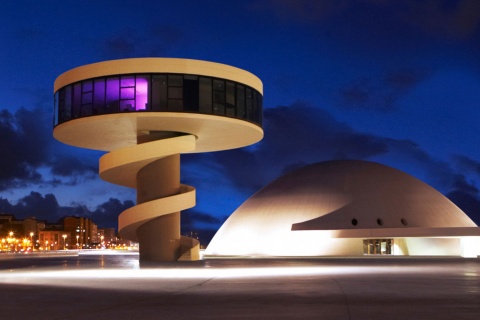 The cosmopolitan side of the Niemeyer Centre

Avilés (Asturias) has undergone an urban regeneration. This city in the north of Spain has begun a passionate affair with architecture. The Niemeyer Cultural Centre is a good example, best admired on a stroll along the bank of the estuary. Here there is harmony between tradition and avant-garde, local dishes and haute cuisine, and places that have inspired leading filmmakers such as Woody Allen and Kevin Spacey. These are a few of the ways that the town of Avilés charms its visitors.

From steel and ironworks to stage arts

The construction of the Niemeyer Cultural Centre (2011) has revolutionised the former industrial area of Avilés. Modernity has arisen through the architecture, music, cinema, theatre, dance, exhibitions and gastronomy, without turning its back on the history while achieving a pleasant visual balance. The landscape of the docks on the estuary—environmentally renovated and given new walkways—stands alongside the avant-garde cultural complex, which was given to Asturias by Brazilian architect Oscar Niemeyer. The Niemeyer Cultural Centre was his first and final work in Europe, and his most important in Europe. 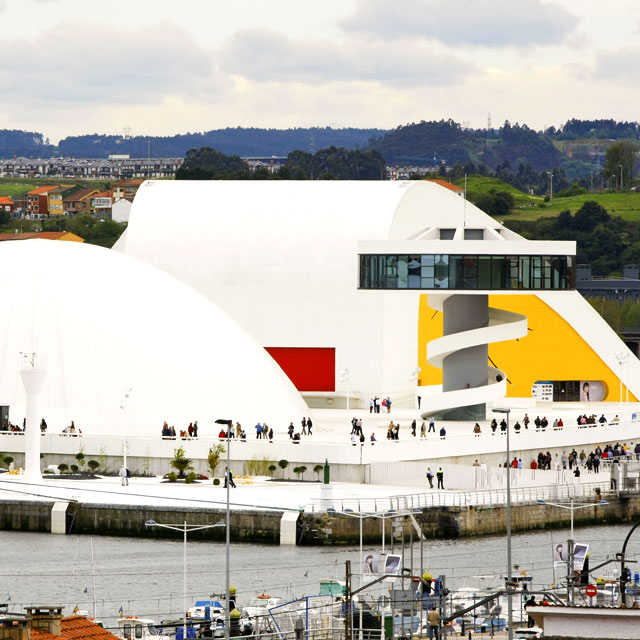 Described by Niemeyer himself as “a place for community, education, culture and peace”, the construction consists of five spaces: an auditorium (whose stage can be opened to the outside), a dome, a tower, a multi-use building and a square on the edge of the estuary which acts as a symbol of openness towards visitors and the world. The Brazilian’s impact includes a walkway that connects the modern cultural centre with the old town of Avilés. So, just a few steps separate the curved lines of Niemeyer and the attractive colonnades of the city centre,—Plaza de España and surrounding areas—declared historic and artistic buildings and which includes medieval, Romanesque, Gothic, baroque and modernist ruins. 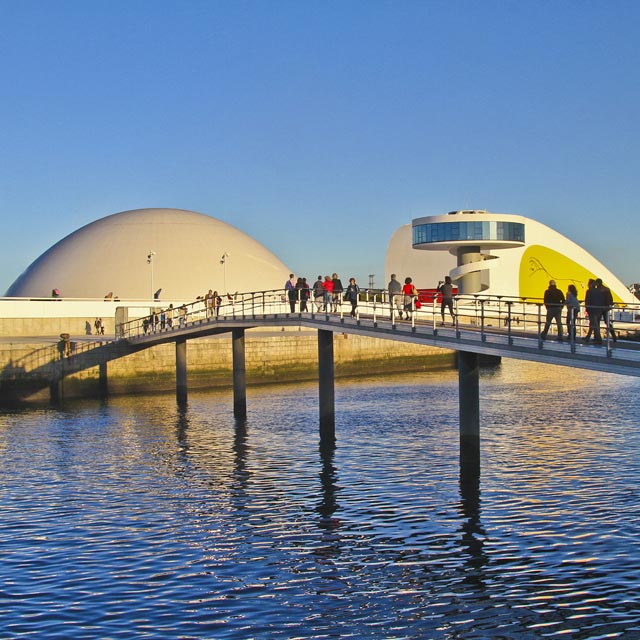 Tastes of yesterday and today

The charm of Avilés is mirrored in its cuisine. In this sense, in the heart of the city it is possible to try both the typical fabes beans with clams and adventurous culinary creations by the most avant-garde chefs. It is no wonder, therefore, that century-old places such as Casa Tataguyo are located on the Salinas beach promenade alongside gastrobars such as Ewan Food. The region of Asturias is also a good destination to try the quintessentially Spanish custom of tapas. We recommend enjoying them with a nice cider. The particular way of serving this typical artisanal drink will appeal to everybody. 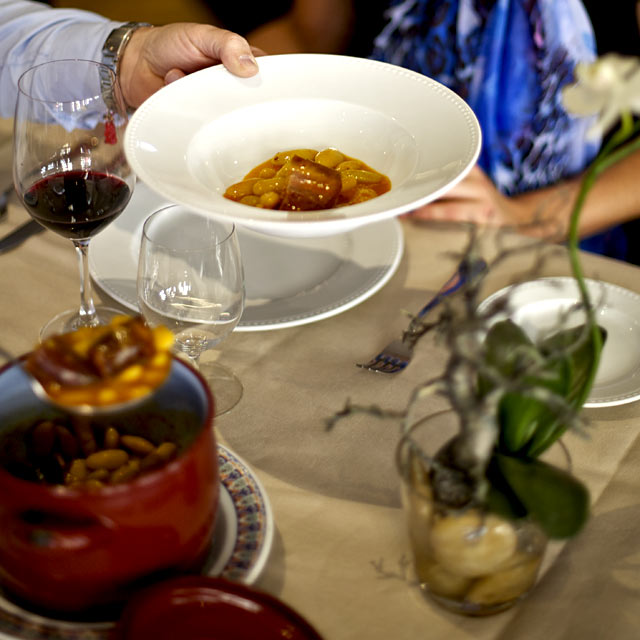 Despite its modest popularity, the city of Avilés can be considered a film set because directors from all eras have filmed in its streets. Vicky Cristina Barcelona, by Woody Allen; You're the One, by José Luis Garci, and El milagro de P. Tinto, by Javier Fesser, are some of the most well-known productions. The Ferrera Palace gardens, which are now part of a luxury 17th century hotel, were one of the locations chosen by Woody Allen, while the San Nicolás de Bari church, the Town Hall square, the parque del Muelle and the Avilés lighthouse have inspired other filmmakers.Another part of the identity of this part of northern Spain is its connection to mining. The Arnao Mine Museum is an interesting trip and is located on a cliff seven kilometres from Avilés. It is about the oldest use of mineral coal on the Iberian Peninsula and the only submarine mine in Europe. Avilés truly is both traditional and avant-garde, and this combination could be one of its main attractions. 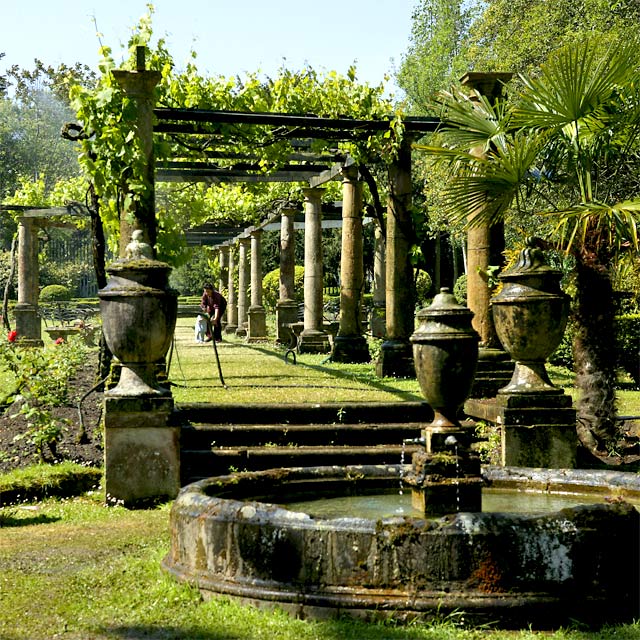 Ferrera Palace gardens © Ayuntamiento de Avilés
Find out more about...
What to do 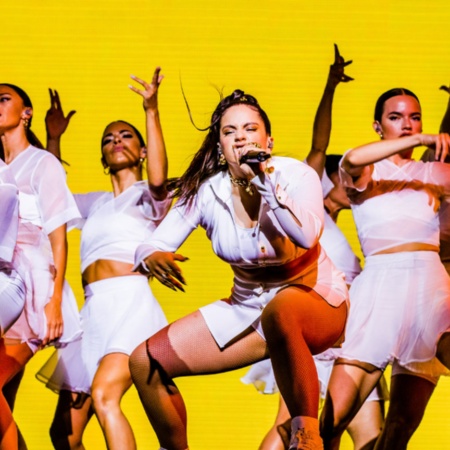 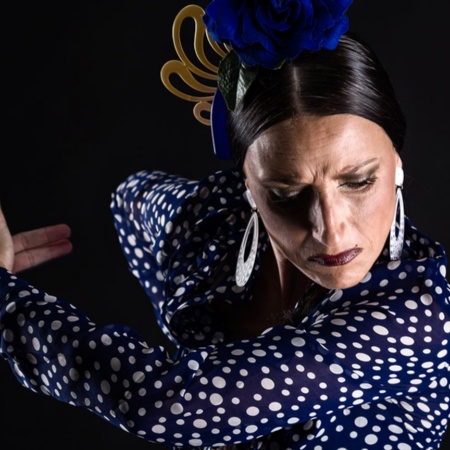 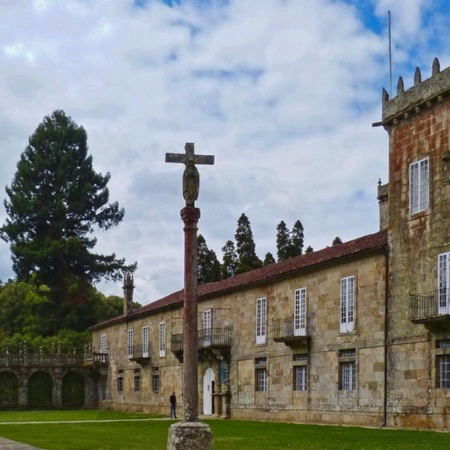