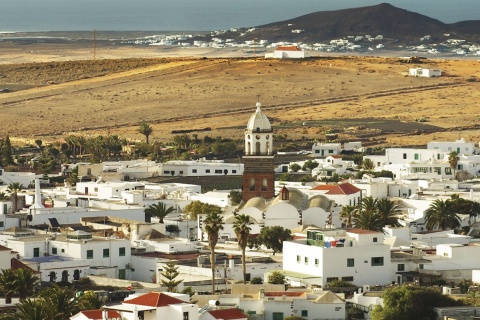 Town of Teguise on the island of Lanzarote (Canary Islands).

Teguise, former capital of the island of Lanzarote, sits in an incredible volcanic landscape formed by old craters and rivers of solidified lava. A good part of the island's history is reflected in the old town, a collection of whitewashed houses which gathers together beautiful examples of popular and noble architecture.

Profoundly influenced by the mark left by the Lanzarote architect César Manrique, Teguise preserves two of his principal creations: the Cactus Garden and the foundation which bears his name, which was also the artist's former residence. All this is complemented by the beautiful beaches of Famara and Costa Teguise, this last one converted into one of the chief tourist centres on the island.

Teguise has a past closely linked to the history of the Canary Islands, since it was one of the first urban centres to be developed in the archipelago. Its historic quarter, a well-cared for collection of whitewashed houses and cobbled streets, springs up amid an unusual landscape formed by extinct craters and vast plains of dark volcanic earth. Its former status as capital is reflected in the shape of a valuable legacy of noble architecture and whitewashed houses which feature elements of local tradition, such as the typical wooden balconies.In the very centre of town you can find some examples of the most important historic buildings on the island, such as the Palace of Spínola or the convents of Santo Domingo and San Francisco. And very close by, next to the extinct volcano of Guanapay, stands the Castle of Santa Bárbara, restored and converted into the Museum of the Emigrant. In the same way as other parts of the island, Teguise has been profoundly marked by the work of César Manrique. The legacy of César ManriqueIn the area known as Taro de Tahíche is the César Manrique Foundation, which was once the residence of the brilliant Lanzarote architect. It is an original museum in which, as well as an interesting collection of contemporary art, it is possible to admire the unusual integration of the building into the volcanic landscape which surrounds it. Also within the municipal district is the Cactus Garden which, opened in 1991, was the artist's last work. Dominated by an old grain mill, this singular space combines original rocky shapes with the function of a botanical gardens, since it contains around 1,400 different species of cactus.In the coastal area, Teguise has excellent infrastructure geared towards tourism. Costa Teguise, one of the chief urban centres on the island, has a wide variety of hotels establishments, housing developments, shops and restaurants. Some of its beaches, especially Las Cucharas, are famous for the optimum conditions they provide for windsurfing.This view contrasts with the wild beauty offered by Famara beach, in the west of Lanzarote, a true surfers' paradise. Surroundings and Gastronomy From the island's former capital you can embark on interesting tours of the surrounding area. In the north of the island is Haría, a small town nestling between mountains in a fertile valley. In the coastal area we can find Jameos del Agua, an original complex which makes use of a volcanic tunnel, as well as Cueva de los Verdes and the Mirador del Río viewpoint. Other nearby spots are Tinajo, in whose sanctuary of Mancha Blanca the Virgen de los Dolores, the island's patron, is venerated, and San Bartolomé, which possesses an architectural heritage from which Casa del Mayor Guerra and Casa Ajei stand out. In the southwest of the island is the Timanfaya National Park, a true showcase of the island's volcanic ecosystem. The visit includes a bus trip which covers the Route of the Volcanoes and which leaves from the visitors' centre. The park is in turn surrounded by the Volcanes Nature Reserve, where fields of volcanic ash and lava run down to the coast. Meanwhile, the gastronomy of Lanzarote allows you to taste specialities such as ranchos (a traditional pork stew) and the famous papas arrugadas (boiled potatoes with saltl), which are served with various types of mojos (sauces). The sea supplies Lanzarote's dining table with excellent fish, such as “vieja”, stewed or opened and roasted on the grill, jewfish grouper or sea bass, and fresh shellfish. When it comes to dessert, special consideration is given to the local cheeses, both fresh and cured. Outstanding on the island are the magnificent crops of the Malvasía variety of grape, which produce white wines, delicious sweet wines and vintage wines, all of them labelled under the Designation of Origin Lanzarote guarantee. 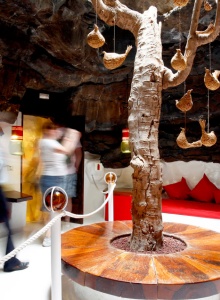 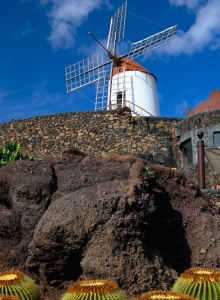