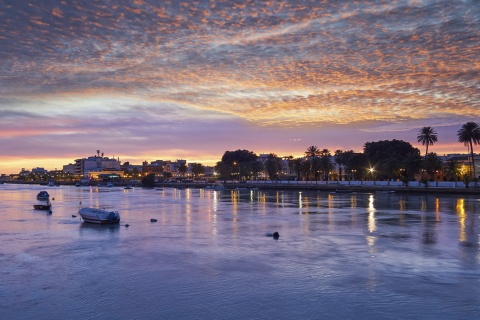 One of the places that best represents the Costa de la Luz is El Puerto de Santa María. This town of whitewashed walls lies among pinewoods, beaches and marshes, right on the Bay of Cádiz.

The Bahía de Cádiz Natural Park serves as a backdrop for the town centre's most symbolic buildings and the boats on the coast. Marinas, golf courses and luxury residential complexes lie on the Atlantic coast, enjoying beautiful views and more than 300 days of sunshine a year.

This port town is part of the Costa de la Luz, a section of the Atlantic coast where pine trees and marshlands extend down to the sandy beaches. The enviable climate of this Andalusian town makes it the ideal destination for sun, sea and outdoor sports. Luxurious holiday resorts have grown up in this wonderful landscape and side-by-side with its long-standing seafaring tradition, they offer all the comforts a traveller could desire. Vistahermosa, Puerto Sherry and Casino de Bahía de Cádiz are good examples of these modern developments.There are many restaurants in the area, and visitors can enjoy their leisure to the full in swimming pools, golf courses and marinas. El Puerto de Santa María offers over 15 kilometres of beaches with fine, golden sand. The beach bars or chiringuitos on the Levante, Valdelagrana, Santa Catalina and Fuenterrabía beaches are a wonderful way to sample the delicious fried fish, a local speciality, while enjoying a view of the Atlantic. The local sherry, with its own Designation of Origin, goes well with any meal.Town centreLegend has it that this seaside town, the birthplace of the poet Rafael Alberti, was founded by an Athenian commander. However, the earliest historical records date from the Islamic conquest. The town reached its high point of prosperity after the Reconquista under Alfonso X ( 13th century) and under the rule of the Dukes of Medinaceli. In the centuries that followed, its relationship with the Atlantic Ocean and with maritime expeditions (including the discovery of the Americas) led to it becoming the seat of the Captaincy General of the Ocean. Thanks to its wealth of architecture, the entire town has been declared a Property of Cultural Interest.San Marcos Castle is one of its most outstanding buildings. On the site of a former mosque, there is a Christian chapel in the castle keep. The tracery reveals both Almohad and Gothic elements, the fruit of cultures existing side-by-side for centuries. This architectural ensemble is an official Property of Cultural Interest.An outstanding religious construction in El Puerto de Santa María is the Great Priory Church, with an initial plan dating from the 15th century. This is the period of the Portada del Perdón, with Gothic elements such as pinnacles, flying buttresses, and gargoyles, although the rest of the portico is later. The Puerta del Sol was designed in the 17th century, as attested by its fluted columns, floral decoration and medallions.The town itself developed and flourished in the 16th to 18th centuries, with a plethora of Baroque buildings, such as the splendid Casa de los Leones. This mansion was built by one of the many merchants who came from the Cantabrian coast to do business in the port.Another Property of Cultural Interest is the Monastery of La Victoria, a former hospital and prison. Its fortress-like appearance combines typical Gothic and Renaissance features. Its magnificent outer portal is particularly interesting.The churches of San Francisco, La Concepción, and the priory church of Nuestra Señora de los Milagros, and the convents of Las Capuchinas and Espíritu Santo, are also fine examples of the religious architecture of Cádiz. You can finish your tour with a visit to Valdivieso Palace, or the bullring, one of the oldest in Spain.Costa de la LuzEl Puerto de Santa María is an excellent location for sampling the best local specialities. The cuisine of the Bay of Cádiz is based on Atlantic fish and seafood, accompanied by locally grown vegetables. Tortillita de camarones (shrimp fritters), urta a la roteña (redbanded seabream) and sopa marinera (fish soup) are a few of the essential dishes to try. Cuttlefish, clams, marinated fish dishes, and mackerel with noodles will probably also feature on a culinary wishlist. Sherry is made here, with the Designations of Origin Jerez-Xérès-Sherry and Manzanilla-Sanlúcar de Barrameda.The Costa de la Luz offers plenty of interesting places to visit, with beautiful historic towns and beaches on the Atlantic coast. Sanlúcar de Barrameda, where horse races are held on the beach (a fiesta of International Tourist Interest), Puerto Real, San Fernando, Chiclana, and Conil de la Frontera show the best of the local seafaring tradition. A different way to travel from Puerto de Santa María across the bay to Cádiz is on the regular catamaran service, which takes about 30 minutes. Here, the neighbourhoods of La Viña, Santa María, and Pópulo are rooted in the region’s popular Carnival and flamenco traditions. Although if you’re looking for flamenco, Jerez de la Frontera is home to the genre’s most famous singers. This is an aristocratic city, worth visiting for its sherry and famous equestrian culture (horses are the protagonists of the Feria del Caballo, also of International Tourist Interest). This tour also includes beautiful churches and the majestic Alcazaba fortress. 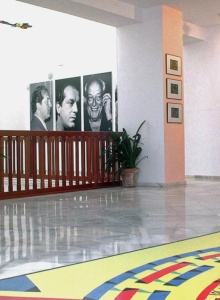