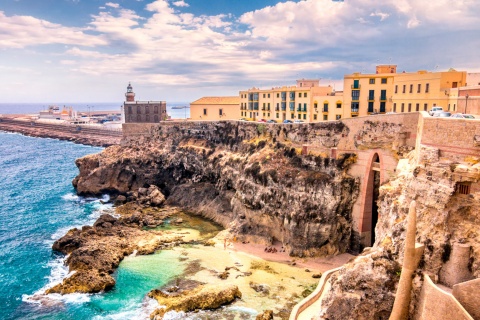 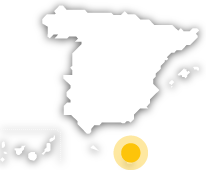 A city of Phoenician origin, for centuries Melilla has been an important trading port and defensive bastion in the Mediterranean. The early Old Town contrasts with the rest of the city, which has an important group of Modernist buildings.

Attracted by its strategic position in the Mediterranean, the Phoenicians established themselves on Melilla's current site in the 7th century B. C. Rusadir, as the city was known, became a flourishing trading port. Centuries later, then a Roman colony, it came to be an important communications centre. Melilla reached its most splendid age with the Arabs, as a trading and defensive city. From 1497, it passed into Spanish hands and became an important military establishment.

The oldest part is the fortified city (16th C.), known as El Pueblo. Declared a Historic-Artistic Site, Melilla la Vieja was originally formed by four fortresses linked together by drawbridges. The narrow streets making up oldest districts for the city are hidden behind its thick walls and deep ditches. The most recent defensive bastion is situated in the Citadel, made up of the Grande, Chica, Victoria and Rosario forts (18th C. Above the Hornabeque ditch stands the second citadel, centred on the Parade Ground, where the remains of the old Roman settlement were found. Over the Santiago ditch you reach the oldest walled enclosure (16th-18th C.). Within the walls, the Plaza de las Peñuelas is surrounded by important buildings, like the Gothic chapel of Santiago. Other important places in the early citadel are the Museum of the City, the church of la Concepción, the oldest in Melilla (17th C.), and the bastion of La Concepción, site of the Army Museum. From the 19th century onwards, the city outgrew its limits and established three new forts on the perimeter: Camellos, with a circular floor plan and ditch; Cabrerizas, a rhomboid shape flanked by two hexagonal towers; and Rostrogordo, whose pentagonal shape hides a large parade ground.

Around the port and the Avenida de Juan Carlos I, the Ensanche shows a model urban layout sprinkled with carefully worked façades and rows of Modernist balconies. Around the Plaza de España stand notable buildings like the Palace of La Asamblea, of art deco inspiration, the Bank of Spain and the Military Casino. A faithful reflection of the multicultural character of the autonomous city, Melilla, city of the four cultures - Christian, Muslim, Jewish and Hindu - reflects its cosmopolitan character in various of its most outstanding buildings. The Central Mosque, with architectural references taken from the Córdoba mosque, is one of the most beautiful churches in the city. The church of the Sagrado Corazón de Jesús, situated opposite the Plaza de las Cuatro Culturas, the Or Zaruah Synagogue, right in the historic centre, and the Hindu Oratory can also be visited.

Melilla has magnificent wide beaches of fine sand on its coast, as well as the spectacular “Puerto XXI” marina, situated between the old Mineral Wharf and San Lorenzo beach. It is a recent construction that has hundreds of moorings for leisure boats as well as a shopping and leisure centre. Among the many opportunities, you can learn to sail in a Sailing School or practise other water sports like jet skiing, windsurfing or diving. Among the many hotels in Melilla, the Parador de Turismo, situated in the Ataque Seco district, next to the Victoria Fort, is outstanding. When it comes to eating, Melilla has a delicious and very varied cuisine which has similarities with Andalusian regional cuisine. The outstanding features are fried fish, mouth-watering seafood and rice dishes, along with a selection of exotic specialities brought by the rest of the Melilla community: "pinchos morunos" (spicy meat kebabs), "harira" (meat and vegetable soup) and "couscous" (based on wheat semolina). Among the desserts, fritters, sweet couscous, filled pies and stuffed dates are outstanding. 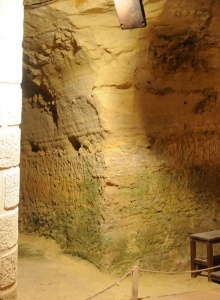 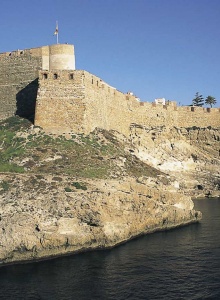 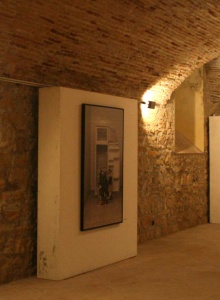 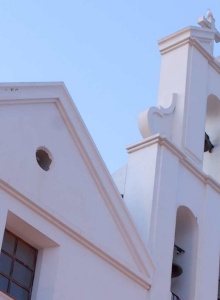 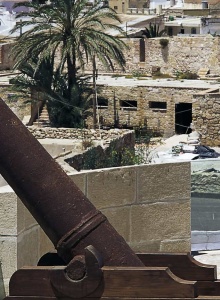 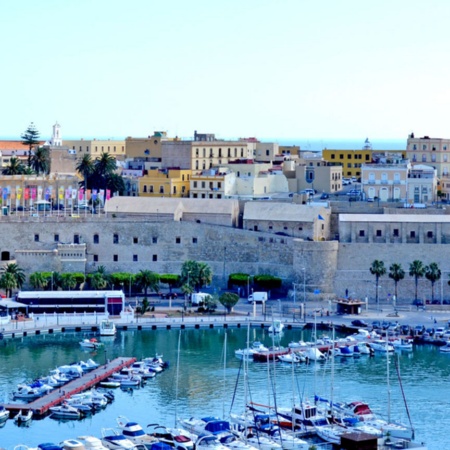