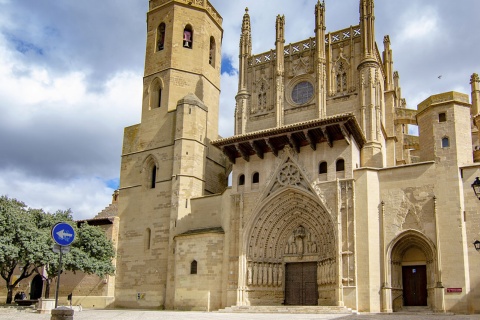 In the fertile county of La Hoya lies Huesca, which has a history going back more than two thousand years.

El Coso, on the line of the old medieval walls, marks out an interesting network of streets presided over by the Cathedral.

Almost 2,500 years ago, on the site of modern Huelva, was Bolskan, an Iberian settlement which, in the middle of the 2nd. C. BC., was known as an important mint. A century later, under Roman rule, Osca - the name with which the city was rechristened - became the destination of the exiled praetor Sertorio, who established a senate there as well as the first centre for studies in Aragon that later because the Sertorian University. This had great cultural importance in Huesca until it was closed in the middle of the 19th century. El Coso, Joaquín Costa and the Ronda de Montearagón now form the ring-road surrounding the steep historic centre of Osca, with the Cathedral at the summit. The building of this Gothic church was ordered by King Jaime I at the end of the 13th century on the site where it is believed the forum of the old Roman city stood. In the Plaza de la Catedral, presided over by the figure of "La Moreneta”, stands the City Hall (16th C), a strong Aragonese building with towers on either side. In the nearby Plaza del Seminario is another building not to be missed: the old palaces of the kings of Aragon (12th C.). Inside, according to tradition, happened the so-called Bell of Huesca, which involved the decapitation of twelve nobles by order of Ramiro II "el Monje" (the Monk). Nowadays, the site is occupied by the Provincial Museum, which houses an important collection of archaeological pieces and pictures. Near the Plaza del Mercado is San Pedro el Viejo (12th C), an early Romanesque monastery which is worth visiting because it is one of the oldest churches in the province. Behind its façade it hides a lovely cloister preserved in its early form and the pantheon of the Aragonese monarchs Alfonso I "el Batallador" (the Warrior) and Ramiro II "el Monje" (the Monk). The Huesca Romanesque style has three important reference points in the shape of the church of Las Miguelas, which began as a hospital at the beginning of the 12th C; the basilica of San Lorenzo, also in Romanesque style and with an inverted grid plan; and the hermitage of Salas, built in the 12th century. In El Coso, where the city walls once stood, you can visit the Miguel Servet municipal park, a green area of the provincial capital. The most popular atmosphere in the city can be found in Cuatro Esquinas, in the Porches de Galicia.

Meats and sausages are two of Huesca's main claims to culinary excellence. Roast lamb, with the Ternasco de Aragón Denomination of Origin, in another of the most symbolic dishes of the whole region. The same applies to cod, a vital ingredient for making "ajoarriero de Huesca" (based on cod, oil and garlic) and cauliflower with cod. Another option is eggs "al salmorrejo" (eggs heated with meat and sausage). as for typical desserts, we should mention "castañas de mazapán" (marzipan chestnuts) and "colinetas" (sweet made from marzipan and crystallised fruits). Excellent wines with the Somontano Denomination of Origin are produced in the province. Huesca has a rich cultural and natural heritage tat attracts thousands of visitors every year. A few kilometres from the capital is the Cañones de Guara Natural Park, a natural area suitable for practising outdoor sports like canyoning. The Aragonese Pyrenees have countless attractions for tourists. Their most characteristic landscape is formed by summits and green valleys, like those of Ansó, Hecho and Tena, the latter declared a biosphere reserve. The Ordesa and Monte Perdido National Park is, because of its fauna and high ecological value one of the most important protected areas in the Pyrenees. For this reason Monte Perdido has been declared a World Heritage Site. At the foot of this mountain is the Parador at Bielsa, a welcoming mountain refuge on the banks of the River Cinca. The great heights of the Pyrenees and the most southerly glaciers on the continent of Europe are found in the Posets-Maladeta Natural Park and the Aneto peak (3.404 metros). Winter sports lovers have the chance to enjoy some of the best ski stations in the whole country in the Huesca Pyrenees: Astún, Candanchú, Cerler, Formigal, Panticosa-Los Lagos, etc. The Aragonese Way, a variant of the Pilgrim's Road to Santiago de Compostela, runs through Huesca. From France, the path enters Spain over the heights of Somport (1.632 m.). After leaving Candanchú and Canfranc, it arrives at Jaca. Here, the outstanding feature is the Castle, a fortress built in the 12th C. In its historic medieval centre you can admire the Citadel, whose construction was ordered by Felipe II in the 16th century, and the Cathedral of San Pedro, declared a National Monument. The route continues through Puente la Reina de Jaca and Berdún until entering Navarre. 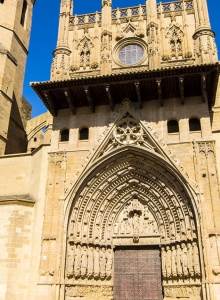 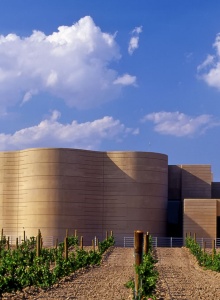 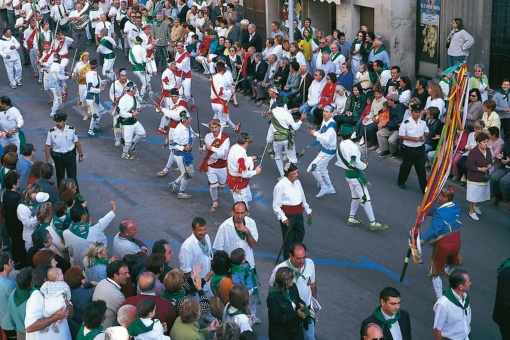 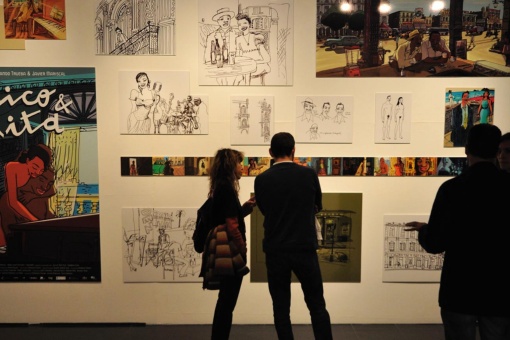