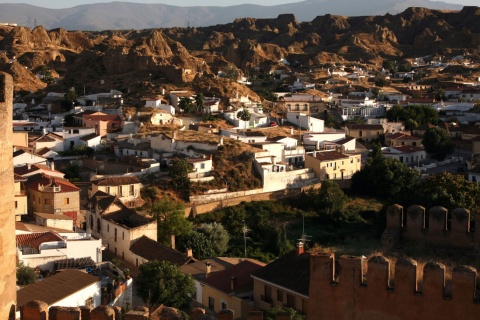 Inland in the province of Granada is Guadix, considered one of the oldest human settlements in Spain.

Its old town brings together an important heritage of monuments, with the medieval Arab Citadel, the Cathedral and various Mudejar-style buildings outstanding, although the most characteristic thing in the city are its districts with original cave dwellings. A city with a strong character, Guadix preserves a cuisine linked to the Andalusian tradition and firmly rooted customs, like the popular Cascamorras Festival.

Set in a strategic natural pass linking the Levante with the Guadalquivir valley, the county of Guadix y el Marquesado has been inhabited since prehistoric times, as witnessed by the many archaeological remains found in the area corresponding to the Neanderthal and Upper Palaeolithic periods and to the Metal Age. Inhabited centuries later by Phoenicians and Carthaginians, it came to be an important Roman colony, called Julia Gemella Acci. The Arab Citadel, which has been declared a National Monument presides over the city. Built in the 11th century on top of a hill, from its towers you can get unbeatable views of the city and its surroundings. Around this bastion extends the monumental city, in whose appearance you can appreciate the mark left by long centuries of Arab presence. Within its streets, the Cathedral is outstanding, a real gem in which Gothic, Renaissance and Baroque styles go side-by-side. Built between the 16th and 18th centuries on the remains of an old mosque, inside it has outstanding rooms like the sacristy, work of the master Diego de Siloé, as well as a magnificent Baroque choir, by Ruís del Peral. Guadix preserves many examples of Mudejar architecture. One of the most outstanding is the church of Santiago, from the 16th century. A slim Mudejar tower stands next to its beautiful Plateresque-style façade, while inside the church the valuable Mudejar coffered ceiling is the outstanding feature. Other churches in the city, like those of San Francisco or Santo Domingo, also preserve this feature. It is also possible to find some aristocratic houses and other outstanding buildings, like the Palace of the Marqués de Villalegre, the Peñaflor palace or the Hospital Civil. But, if there is something that distinguishes Guadix from other places, it is its typical districts, like Las Ermitas or Las Cuevas. Here there are many examples of cave dwellings - original buildings dug out of the earth. Some of the most symbolic are Ermita Nueva, the Cueva del Padre Poveda and the Cave-Museum of Arts and Popular Customs, in which an interesting collection of local craft objects is displayed. The La Magdalena, Cuatro Veredas and San Fandila viewpoints enable you to enjoy the incredible landscapes offered by this part of Granada.

In the Calle de San Miguel stands the Cascamorras Monument, erected in honour of the star of one of the city's most popular festivals. Every 9 September, this character, dressed up in brightly coloured clothes, is hounded and chased by the residents of the city after trying unsuccessfully to recover the image of the Virgin found in neighbouring Baza. Other events on Guadix festival calendar are the festivals of the patron saint in honour of San Torcuato, on 15 May, and the Fair, which takes place between the end of August and the beginning of September. Another attraction offered by Guadix is the chance to discover its cuisine, which has recipes of great character that, in many cases, are rooted in the areas Andalusian tradition. Typical are "gachas" (liquid dough based on flour), "migas" (made with breadcrumbs, pork, garlic and oil), and other dishes like pickled partridge, rabbit with garlic or poor man's potatoes. For dessert, there is nothing better than the typical sweets, like "tocinillos de cielo" (sweet made from egg yolk and syrup), rice pudding or egg custards. Andalusian wines with Málaga, Condado de Huelva, Montilla-Moriles or Jerez-Sherry y Manzanilla de Sanlúcar de Barrameda Denominations of Origin may be the perfect accompaniment to these mouth-watering recipes. Very near to Guadix are other placed of interest. Baza, where the Lady of Baza was found, tells us of the ancient Iberian culture. Its Arab and Jewish legacy is shown in the remains of walls, the citadel, baths and Jewish quarter. You can also visit Granada. The Alhambra, the Generalife and the district of Albaicín - all declared a World Heritage Site by UNESCO, are just some of the treasures offered by the provincial capital. The inland part of the province offers endless possibilities. The Sierra Nevada National Park, the most southerly high mountain system in Europe, has a rich landscape and exceptional biology as well as having nearby the Pradollano ski station. As well as the Sierra Nevada National and Natural Park, the mountain parks of Castril, Baza, Huétor and Tejada complete the rich landscape. 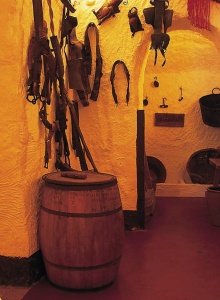