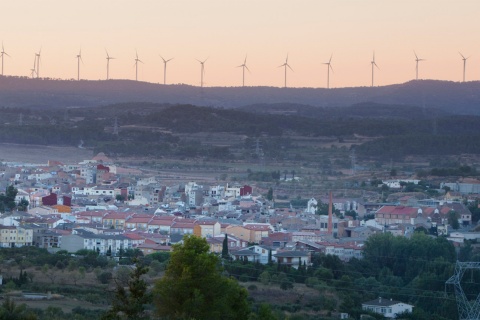 In the middle of the Conca de Barberà region, astride the lands of the interior and the Tarragona coast is L’Espluga de Francolí.

Surrounded by a leafy natural area, this town is closely linked to wine production, as is shown by one of the architectural jewels in its historic quarter, the Modernist Wine Cellar with its Wine museum. L’Espluga, located on the Cistercian Route, is also the anteroom to the Monastery of Poblet. This Cistercian monastery, one of the largest in Spain, was declared World Heritage by UNESCO in 1991.

Irrigated by the waters of the Rivers Milans and Francolí, L’Espluga de Francolí is one of the most popular tourist towns in the interior of Tarragona province. The incredible beauty of its natural surroundings and its closeness to the Monastery of Poblet have allowed this town, with strong agricultural roots to be endowed with a major tourist infrastructure related to the practice of open air sports such as hiking, cycling and horse riding trails, climbing and potholing. Its condition as a summer resort dates back to the end of the XIX century, with the develpment of Las Masias, a hotel complex located on the outskirts of the town which made the most of the special properties of the springs in the area. As well as its numerous natural attractions, L’Espluga de Francolí offers within its urban network a wide variety of cultural and leisure possibilities. Without a doubt, one of the most interesting options is to visit the Museum Cave of la Font Major. Accidentally discovered in 1853, the cave is composed of a group of underground galleries of karstic origin through which the waters of the River Francolí run and which housed various human settlements throughout History. Part of its installations include an interesting exhibition on the various ways of life of its former settlers, belonging to the Early Paleolithic, Neolithic and Bronze Age periods. The town has an intense cultural life, as can be appreciated in El Casal, a historic social centre where the most varied displays of art, cultural and sport take place, including theatre workshops, music lessons, festivals, literary competitions, etc. A stroll through the historic quarter will also lead us to the former Casa Carulla ( XVII c.), where the Museum of Rural Life is located Through its various sections, visitors can find out about the customs, agricultural work, traditional trades and other aspects related to the town's past. As for local architecure, this has two of its main references in the Old Hospital ( XIV c.), now a library and municipal archive, and the church of Sant Miquel or Old Church, a Romanesque transitional Gothic place of worship (XII-XIV centuries). Declared Historic-Artistic Heritage, it has a tower attached to it which, as well as housing a small museum, allows you to admire beautiful views of the city.

Wine and the City

Introduced in the mid nineteenth century, cultivation of vines was an important factor in the economic development of the region. To be precise, one of the architectural jewels of L’Espluga is closely linked to wine production: the Bodega Cooperativa. This is a magnificent example of a modernist wine cellar planned at the start of the XX century by Lluís Domènech i Montaner and finished by his son Pere. Considered by many to be the “cathedral of wine”, the building consists of three naves and stands out due to the sobriety and elegance of its lines. Its installations currently include the Wine museum, which shows you the history and development of methods for preparing wine, using audiovisual and other displays. In any of the bars and restaurants in l’Espluga you can try the excellent wines produced in the town, which are backed up the the Conca de Barberà Designation of Origin, where white wines are the most prominent, although rose, red and sparkling wines are also produced. These beverages will be the perfect complement to the typical specialities of the area. Tasty dishes such as coques de recapte (a fine bread dough baked with onion, spinach and other vegetables) and grilled meats served with vegetables and ali-oli (a sauce made from garlic and olive oil). Nor should we forget the vegetables from the interior, accompanied by salsa romesco (made with dried red peppers, tomatoes and almonds), and the delicious locally made sausages. Almonds are the main ingredient in desserts, among which are the famous carquinyolis and almendras garrapiñadas (almonds coated in syrup).

L’Espluga de Francolí is located on the Route of the Cistercian Monasteries, which will lead us in the province of Tarragona to the monasteries of Santes Creus and Poblet, the latter having been declared World Heritage by UNESCO. On this unique route we will discover towns such as Prades, Montblanc, Alcover or La Selva del Camp. The Costa Daurada is also a part of the Tarragona coastal strip. A shore with calm shallow waters and excellent golden beaches. Towns such as Salou, Cambrils, Calafell, Torredembarra or Altafulla combine historical constructions with a wide variety of holiday offers on the shores of the Mediterranean. The possibilities are multiple: from visiting the Delta del Ebro Natural Park to finding out about the Iberian hamlet of Moleta del Remei (in Les Cases d’Alcanar), as well as the Port Aventura theme park. On this section of the coast is Tarragona capital, which offers an important legacy of monuments among extensive beaches. Its Roman quarter, which is World Heritage, is one of the points of interest of this Catalan city.