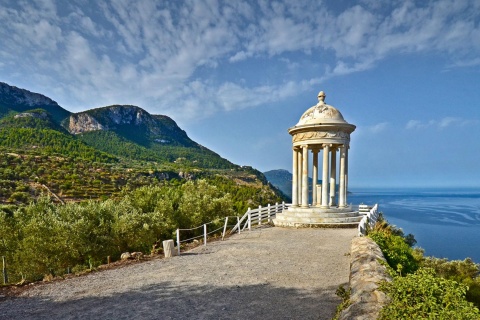 Deià is a beautiful town in the Majorcan coast known as Costa Norte, situated between Sierra de Tramuntana and the sea.

The city centre, with its ancient Majorcan houses, sits on the side of a small hill that overlooks the Mediterranean. It has remained intact through the passage of time, being traditionally the home to many painters and artists. In the vicinity of this town, the coast forms secluded coves that invite rest and are the ideal setting to take a relaxing walk. These are only a few of the possibilities that Deià has to offer, a place where one can try the delicacies that are typical of Balearic cuisine.

A rugged landscape of forests and olive orchards is the incredible backdrop of Deià, a well-kept village with steep streets, lined with stone façades, that stretch on the slope of a seaside hill.Although the area was settled since Prehistory, the Arabs were the ones that, in the Middle Ages, named it “Ad daia”, and contributed many intelligent solutions to overcome the terrain's unevenness, such as terrace farming.In the higher part of the city, the parish church stands, whose origins date back to the late 15th century. The temple, with an only nave, has an ancient defence tower attached to it, which was later turned into a belltower. In its interior we can visit the Parish Museum, which exhibits an interesting religious art collection.Behind the church we can visit the municipal cemetery (17th century), a splendid viewpoint over the valley, where many distinguished figures who lived in this village have their final resting place.Another remarkable work of religious architecture is the monastery of Miramar (13th century), where Ramón Llull, a writer and missionary, taught.Nearby we find the Museum of the Archduke Luis Salvador. Located in Son Marroig, this museum exhibits the personal belongings of the archduke, as well as different collections of paintings, and ceramics of Phoenician, Greek-Latin, and Arab-Hispanic origin.Another museum in Deià, the Archaeological Museum, collects numerous artefacts from the settlements of Muleta (Sóller) and Son Ferrandell-Olesa.The municipality has many hidden coves along its coast, where the visitor can enjoy a bath on crystal waters. The best known is the cove Cala de Deià, which has become a meeting point for the town's folk, as well as an anchorage for vessels during the summer.Gastronomy and the outskirtsDeià is surrounded by the unique landscapes of Sierra de Tramuntana, and is located only a few kilometres away from other towns like Valldemossa and Sóller. The scenic road connecting Deià and Valldemosa offers excellent views, between olive orchards and the sea. It is recommended that the visitor stop at En Son Marroig to gaze over the edge of the cliff. This constitutes one of the most beautiful views of the Majorcan coastline. Further ahead, Valldemossa boasts a picturesque historic quarter, where we must point out the Carthusian monastery, with a belltower that is covered with green tiles. Going on the opposite direction we find Sóller, which has beautiful stately mansions and palatial residences among orange orchards. An ancient train will take us to the Port of Sóller, a perfect place to be delighted by Majorcan dishes, made with fresh fish and seafood. Or otherwise, we can try island products with their own Designation of Origin, such as "sobrasada" (a kind of spicy pork spread), cheese from Mahón, and wines from Binissalem-Majorca. Tumbet (a vegetable stew with potatoes, fried peppers, and eggplant, covered with tomato sauce), rice-dishes with fish, and "pa amb oli" (a piece of bread rubbed with oil and tomato) must not be missing form our table. For dessert, nothing better than "ensaimada" with some of the fine liqueurs distilled here, like "palo", gin, and "hierbas" 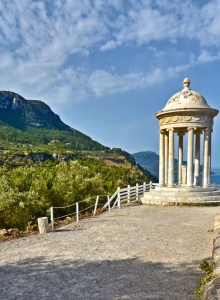