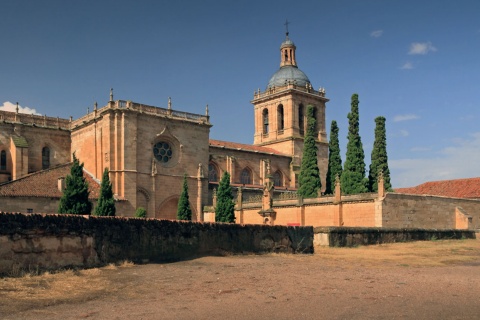 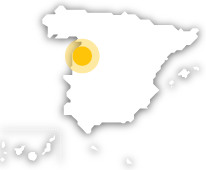 Ciudad Rodrigo, which has Historic-Artistic Site status, is a famous fortified town situated in the west of the province of Salamanca.

Its walls enclose a rich heritage of civic and religious buildings, the most important of which are the Cathedral and the Castle.

The site on which Ciudad Rodrigo stands, a rocky hill on the banks of the river Águeda, has been populated since the Neolithic period. Around the 6th century BC, the vetones, a tribe of Celtic origin, founded the city of Miróbriga and settled there. Four centuries later, the Romans conquered the city and re-named it Augustóbriga in honour of the emperor Octavian Caesar Augustus. Dating to this period are the Three Columns, an enigmatic monument that still stands at the foot of the city's entrance. The object of centuries of dispute between the Arabs and Christians, this fortified town was repopulated in 1100 by Count Rodrigo González Girón, from whom it took its definitive name. King Ferdinand II of León completed the repopulation of the area and undertook several ambitious projects, including the fortification of the city and the restoration of the old Roman port. It was also during his reign that the city regained its status as an Episcopal See and that works on the Cathedral commenced. The main buildings of the historic quarter, which is an Historic-Artistic Site, date back to the 15th and 16th centuries, a period during which the city enjoyed its golden age.

The main defining feature of the city is the imposing medieval wall that surrounds it. This was constructed in the 12th century during the reign of Ferdinand II, although alterations were subsequently carried out during the 18th century. The walled enclosure has a perimeter in excess of 2 kilometers and seven gates, the oldest of which are the Puerta del Sol and the Puerta de Santiago. The Puerta de la Colada leads to the promontory on which the Castle of Henry II was erected by order of the king in 1372. A square-plan keep presides over the fortress. The complex currently houses the city's parador. Situated in the Plaza Mayor, or main square, are several stately buildings, such as the House of the First Marquis of Cerrablo, the 16th-century Casa de los Cueto, and the City Hall. The latter was constructed during the mid-16th century in the Renaissance style but also contains elements added at the beginning of the 20th century. Its main façade has two emblazoned towers and a gallery supported by columns with plateresque capitals. The boom enjoyed by the city during the Renaissance period gave rise to the emergence of numerous palaces and mansions. One of the most outstanding of these is the so-called Palacio de los Castro with its beautiful plateresque portal flanked by spiral columns crowned by figures of lions. Particularly noteworthy in this context is the Palacio de los Águila (16th-17th centuries), an austere mansion adorned with the coats of arms of its former owners. A tour of the city could also include the Neo-Gothic Palacio de la Marquesa de Cartago constructed during the 19th and 20th centuries, the Moctezuma palace, which now houses the municipal cultural centre, the so-called Casa de los Vázquez, now the main post office, and the Palace of the Count of Alba de Yeltes.

The Cathedral is the most important religious building in Ciudad Rodrigo. Although construction commenced around 1165, the building was not completed until 1550 and the result is therefore a mixture of artistic styles. The outstanding element of the façade is the Las Cadenas entrance, the frieze of which is decorated with several sculptural reliefs. The interior of the church is divided into a central nave and two lateral aisles, each covered by rib-vaults. The Main Chapel, situated in the apse of the central nave, has a stellar vault, the work of Rodrigo Gil de Hontañón. Special attention should be paid to the choir stalls, which contain several profane scenes carved by Rodrigo Alemán in 1498.Meanwhile, the Diocesan Museum contains a collection of religious art. Situated close by is the so-called Capilla del Marqués de Cerralbo, a magnificent temple in the Herrera style with a grand dome on a base providing the crest. The interior of the church preserves exquisite walnut reredoses. The old quarter contains other beautiful churches, such as those of San Agustín (16th century), San Pedro (12th century) and the Church of the Franciscanas Descalzas (17th century). Situated on the outskirts of the city, en route to the Águeda reservoir, is the 16th-century Monasterio de la Caridad.

Culture, cuisine and the outskirts

There are numerous places of interest in the environs of Ciudad Rodrigo. The city is situated at the foot of the Sierra de Gata mountain range, which can be reached by following the course of the river Águeda to the villages of El Bodón, El Payo and Fuenteguinaldo. Other places to visit in the vicinity are the Pre-Roman settlements of Irueña and Lerilla, both of which are Historic-Artistic Sites. Situated in the south-east of the province, amidst the Sierra de Francia range, are other not-to-be missed places such as La Alberca, a village with National Historic Heritage status, and Miranda del Castañar, an Historic-Artistic Site, as well as natural beauty spots such as the Peña de Francia rock and the Las Batuecas valley. Farinato (a type of sausage made with breadcrumbs, pork fat, paprika and other spices) is the most typical of the local delicacies and is best served with fried eggs. Other local dishes worthy of mention are chanfaina (based on rice and pork), hornazo (a type of pie) and roasts, especially suckling pig. With regard to the local confectionary, absolute musts are the bollo maimón (a cake made from sugar, eggs and yeast) and repelao (a sweetmeat similar in taste to marzipan and made throughout the area). In terms of culture, one of the most popular fiestas amongst the inhabitants of Ciudad Rodrigo is the so-called Carnaval del Toro (bull carnival). As its name suggests, bulls play a major role in this celebration, with the Plaza Mayor serving for several days as a stage for amateur and professional bullfights with young bulls as well as other festivities. 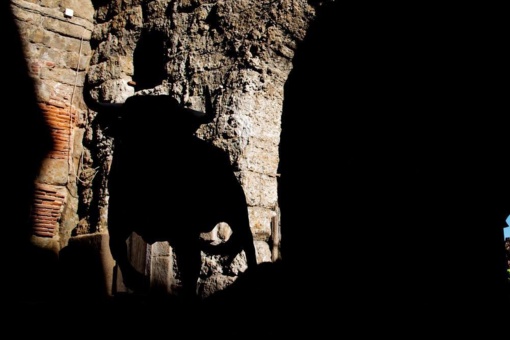 Traditional fiesta of the carnival bullfights