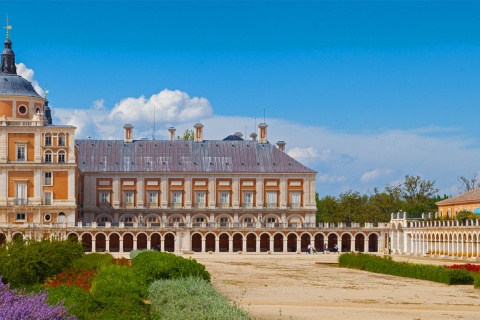 An old quarter which is a Historic-Artistic Site, royal palaces, and gardens on the banks of the Tagus form the layout of Aranjuez.

The ideas of the Enlightenment, adapted to the urban development of cities, are embodied here in a balance between nature and man, the watercourses and the design of the gardens, between the woods and the palace architecture. This is why it was declared a World Heritage Site by UNESCO in 2001. The Strawberry Train and the festival to commemorate the Revolt of Aranjuez, of National Tourist Interest, are some of the cultural musts awaiting the visitor to this town in the Madrid region.

The fertile plain of Aranjuez, between the Tagus and Jarama rivers, has been populated since distant times. The current layout dates back to the reign of Felipe II (16th century), who awarded this town the title of Royal Site. Felipe V (17th-18th centuries and Carlos III (18th century) transformed Aranjuez into a centre of the court where the palace architecture goes hand in hand with woods and gardens, all in line with the aesthetic taste of the Enlightenment. The networked layout of the streets of its historic quarter is a product of this rationalist thought. One of the jewels of this town near Madrid, and the origin of its splendour, is its Royal Palace. The current appearance is the result of reconstructions and additions which began with the work of Juan Bautista de Toledo, architect to Felipe II. Over the course of time, other maestros also had a hand in the construction at the service of the Spanish kings, such as Juan de Herrera (designer of the monastery of El Escorial) and Francisco Sabatini (architect to Carlos III, who was responsible for numerous buildings in Madrid). Inside, there are abundant baroque pieces like those we can see in the clock, porcelain and painting rooms (Lucas Jordán, Vicente López or Esquivel...).

Another characteristic element of Aranjuez is its gardens. Opposite the east façade of the palace is the Flower-bed Garden, English in style, where the fountain sculptures are outstanding. A further two gardens begin near the buildings. Island Garden, so-called because it stretches between the course of the Tagus and the Ría, is another of the places worth strolling through. More wooded is the Prince's Garden, in a French Gothic style. The course of the river, fountains and squares take you to the Casa del Labrador. It is another small palace in the style of the pavilions of Versailles (París), which houses interesting exhibitions of painting. The rest of the town also displays the same values, reflected in the layout of its streets, in the purest baroque style. Uniform buildings, tree-lined streets and spacious avenues are some of its features. A layout which makes it easy to visit other major sites, such as the Mariblanca Fountain, the Royal Theatre, the Servants' and Guest Quarters and Stables or the Food Market. There are also other palaces, such as Osuna, Medinaceli or Godoy. Among the religious architecture, fine examples are the Convent of San Pascual (work of Sabatini with paintings by Megs and Tiépolo), and the churches of Alpajés (a brick construction with a baroque portico) and San Antonio (with its great dome and lonic columns). Aranjuez train station, in a peculiar neomudjar style, is another of the city's monuments. Its tracks go back in time when, between May and September, the Strawberry Train enters into operation.. An old steam engine pulls the carriages on their journey. In addition, we can also visit the Royal Farmhouse of San Isidro, a series of small palaces and gardens. Aranjuez, a city of the court for centuries, conserves many buildings related to leisure. Its bullring houses the Museum “Aranjuez: a festival”, where the visitor can get a taste of the bullfighting world and the history of leisure in the city. Meanwhile, the former Queen Mother's Coach Houses now form the Isabel de Farnesio Arts Centre, a site of exhibitions, conferences and concerts. A good time to visit the city is during the celebration of the Festival of the Revolt, declared to be of National Tourist Interest. It is possible to see representations of the storming of the Palace of Godoy and of the Revolt, bull running, bullfights, the descent of the Tagus and musical performances. Both the Tagus and its Canoeing Club and School and the Legarmarejo racecourse, as well as other riding schools, are other leisure possibilities on offer in this area.

The fertile fields which surround Aranjuez supply the local cuisine with artichokes, Brussel sprouts, broad beans, asparagus... prepared according to many different recipes. Hunting, so traditional in these woods, offers us excellent specimens of pheasant, partridge and quail. Strawberries are another of its specialities. The province of Madrid offers us different routes so you can get to know every corner. In the capital, Habsburg and Bourbon Madrid, the Prado, Thyssen and Reina Sofía museums, the traditional neighbourhoods of Lavapies or Chamberí and the designer boutiques of the Salamanca district are just some of its attractions. Other jewels of Madrid, which are also World Heritage Sites, are the city of Alcalá de Henares and the Monastery of El Escorial. In Alcalá, we can visit the famous Complutense University, the Birthplace and House of Miguel de Cervantes (author of “Don Quixote”) and a great many palaces and religious convents. El Escorial, which Felipe II ordered to be built in the Guadarrama mountain range, is one of the biggest monuments in the Madrid region, the work of Juan de Herrera. The castle of Manzanares el Real and the Plaza Mayor in Chinchón are other attractions of the region's towns. 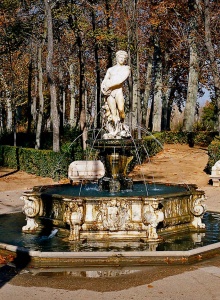 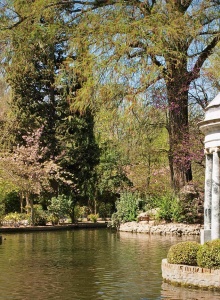 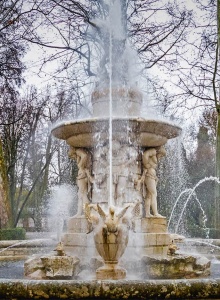 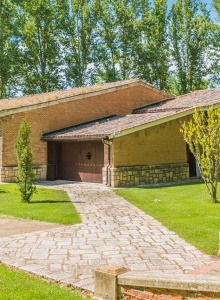 Museum of the Royal Barges 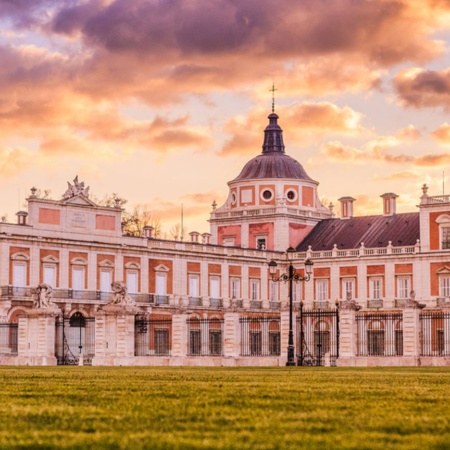 Travel to Aranjuez from Madrid 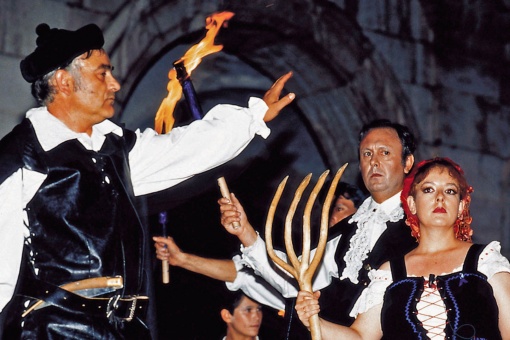