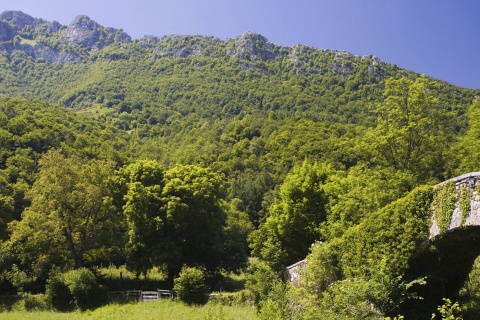 Amid water courses and defiles

UNESCO declared the Redes Nature Park a Biosphere Reserve in the year 2001. To the south of the Principality of Asturias, the beech and oak forests unfold, which shelter more than 50 mammal species and 130 bird species.

For the most part, this territory is part of the Nalon river basin, in the townships of Caso and Sobrescobio. In this section you can find elevations that range between 400 and 2,000 metres, the Torres Peak being the highest of them. As a whole, this park consists of a rugged relief, crossed by watercourses, defiles and narrow valleys. In addition, rain has eroded the calcareous substratum creating karstic elements like abysses and dolines. In the beech and oak forests you can also find holly trees, yews and ferns. In the mountain passes, the landscape is completed with the colours of narcissus, heather and bilberry. This flora provides the optimal spaces for the reproduction of protected mammals like the brown bear and the otter. There is also an abundant bird life, with about 130 species, among which the capercaillie, the golden eagle, the Egyptian vulture and the goshawk must be pointed out. The rocky areas and the scrubs are the habitat of different types of birds. The most numerous game species include red deer, chamois and wild boars. Among domestic animals, the Asturian mountain cow is the most common.