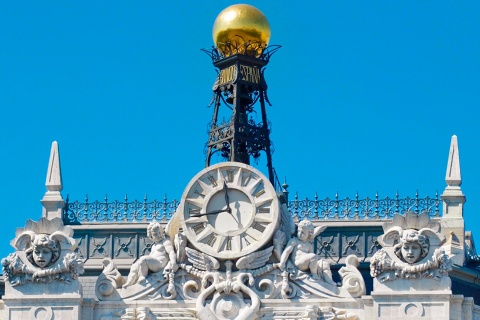 The Bank of Spain is one of the Madrid's most emblematic buildings. It has a privileged location within the city - its façades give onto Plaza de Cibeles Square, Paseo del Prado and Calle Alcalá Street. It was built 1882-1891. The project was directed by architects Eduardo Adaro and Severiano Sainz de la Lastra, and it received the Gold Medal at the National Fine Arts Exhibition.

The building's impressive façade stands out as far as the exterior is concerned. It has an eclectic style, combining a range of different elements. Meanwhile, inside, certain areas are worthy of special note, such as the stunning main staircase, built in Carrara marble and surrounded by beautiful decorative windows, along with what is now the library. The building is also home to paintings by artists such as Goya and Mengs, amongst others. The Bank of Spain underwent a major extension between 1927 and 1934, with the façade being lengthened. This extension provided new areas within the building, such as the patio de operaciones, a huge gallery, 27 metres high, with a floor area of 900 square metres, decorated with Art Deco pieces. In 2006 the third extension was opened, based on a project by the architect Rafael Moneo, which is the part of the building on the corner of Alcalá and Marqués de Cubas streets.

Linares Palace is in a privileged location in Madrid.…

Situated in the popular neighbourhood of Chueca, in Madrid, this…