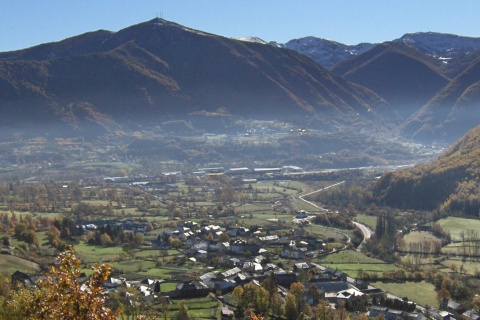 Amid mountain meadows and summits

To the north of Leon, between the Mountains of Leon and the Cantabrian Mountains, the Laciana Valley unfolds, declared a Biosphere Reserve by UNESCO in the year 2002.

The Laciana Valley, the capital of which is the town of Villablino, is made of luxuriant mixed forests and is surrounded by a cirque, with summits higher than 2,000 metres. Cornón (2,188 m), Catoute (2,111 m) and Tambarón are some of the highest peaks in the region. Birch, oak, and chestnut trees form a landscape crossed by the Sil River, which sometimes runs between steep banks, creating gaps and defiles. Thickets alternate with brañas, high mountain meadows where shepherds take their flocks to graze during the summer. This protected space, also a Special Bird Protection Area (ZEPA), shelters emblematic species such as the capercaillie, endangered species like the brown bear and numerous specimens of roe deer and wild boar. The wolf, another typical animal of Spain, also frequents this valley. Cueto Nidio, which reaches a height of more than 1,700 metres, affords excellent panoramic views of the Laciana Valley. The entire area of Laciana is dotted with small traditional villages, many of which are the starting point for the various trails in the Reserve.