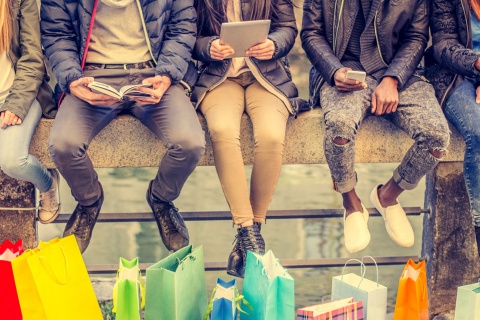 During a visit to Madrid, it is always a good idea to leave some time for shopping, as there are so many options for finding something you love. We'll tell you the best places for shopping and what type of shops you are going to find in each area of the city. One of the capital’s strong points is that it has districts that offer very different products, so whether you’re looking for leading brands, alternative trends or historic markets, you’ll find them in Madrid.

A traditional tour of the shops starts right in the city centre. More specifically, in calle Preciados, next to Puerta del Sol square. Walking around here is a real experience where you will see hundreds of people carrying shopping bags full of things they've bought on this street full of shops and a unique atmosphere. Calle Preciados leads into the equally lively Plaza Callao, which is also next to the Gran Vía, the most famous street in Madrid that always seems to be in a state of flux. All the large chains compete to have a shop window here and there is not a single self-respecting Madrid native or tourist who hasn’t visited the Gran Vía at least once. And there is so much life here that between the shops, you will always find a restaurant or a rooftop bar with beautiful views where you can relax. Madrid would not be the same without its iconic Gran Vía. Also, with it being such a great place for tourists and with total freedom over business hours, in this area, it is normal to find shops open to 10pm every day of the year. 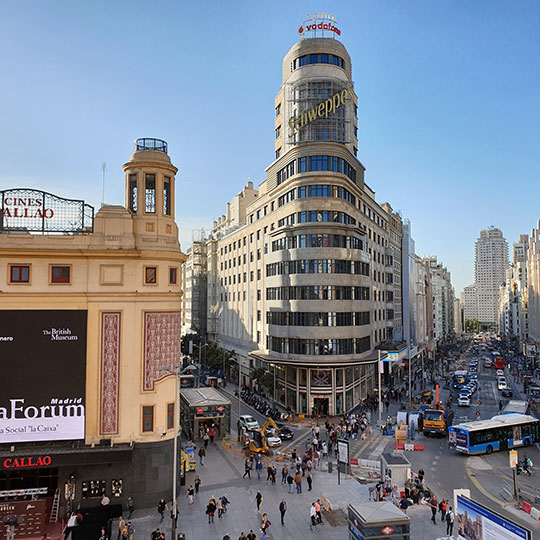 Further away from the more central commercial route, there are other districts that opt for innovation and the edgiest fashions. If you are looking for new designers with studio shops, casual accessories, unique interior design shops, tattoo parlours, comic shops, charming cafes, specialist book shops, then your shopping area of choice is Chueca-Malasaña-Fuencarral. Go for a stroll along Calle Pelayo with its beauty salons, around Fuencarral with all it has to offer, including the San Ildefonso gourmet food market, or around the Triángulo de Ballesta (Triball) located between Soledad Torres Acosta Square (known as Plaza de la Luna) and Ballesta, Desengaño, Corredera Baja de San Pablo, Barco and Valverde streets (perfect for finding vintage clothing). You will notice that these streets combine the most retro aesthetic with the most modern and all styles are welcome. Here there is not a hint of conventionality. 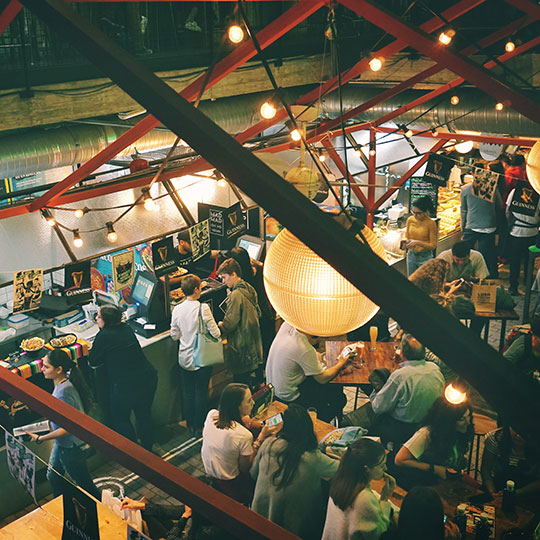 Tour of the luxury shops

Where will you find the most exclusive shops in Madrid? Mainly in the Salamanca district and in the area known as the “Golden Mile”. Some of the most enticing streets to go shopping are Serrano, Ortega y Gasset, Jorge Juan and its inviting alleyway, Lagasca and Claudio Coello. Walking around this area is a pleasure with its stately buildings where you will find world-renowned companies, charming little boutiques hidden in interior courtyards, prestigious jewellery, shops selling artisan handbags and shoes ideal for turning heads, some of the city’s best wine shops, etc. In this district, there are also personal shopper services that can advise you according to your tastes and guide you in discovering new trends. 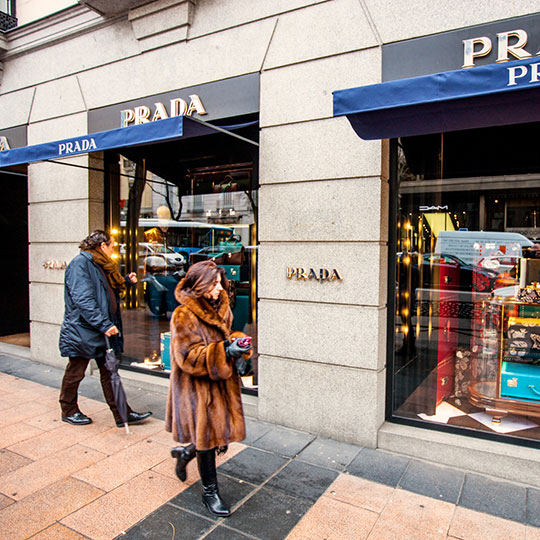 Shop windows in the Salamanca District

Another area that is becoming more and more fashionable amongst trend seekers? This is the neighbourhood of Las Salesas, in streets such as Calle Barquillo, Argensola, Orellana and Fernando VI. The most prestigious young designers sell their creations here. There are florists that draw people in with their fresh flowers and an increasing number of concept stores, where you can find anything from accessories to exquisite ornaments to any type of gadget. On the first Saturday of every month, the venders organise the Salesas Village and bring their products out onto the street to show them off. There are also activities for all the family. 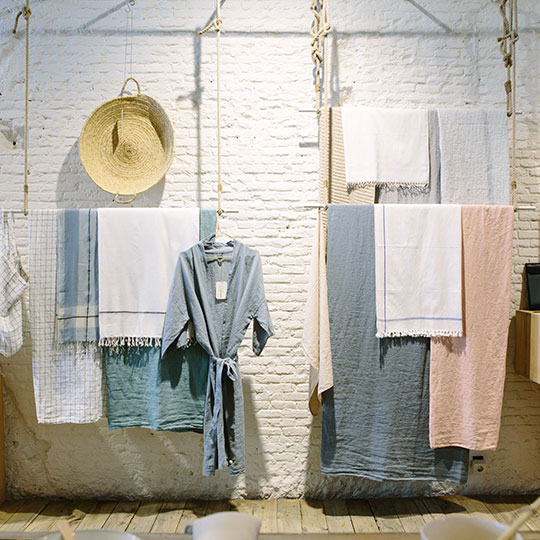 Going for breakfast around El Rastro street market area (in the Embajadores district), shopping and then topping it off with a vermouth in La Latina district is a Madrid native’s perfect way to spend a Sunday. El Rastro is actually an enormous street market with hundreds of stalls and a paradise for those seeking antiques to decorate their houses. Did you know that there are indications that this market already existed in the XVIII century? Take a stroll along Calle Ribera de Curtidores and lose yourself in the surrounding alleyways. Antique books, second-hand clothing, and characters who are 100% authentic Madrid, such as a “chulapo” in traditional dress selling waffles...Going to El Rastro street market in Madrid is a real experience. Mind you, the market sellers start to pack up at 3:00 pm on the dot on Sunday, so you have to make the most of the morning. 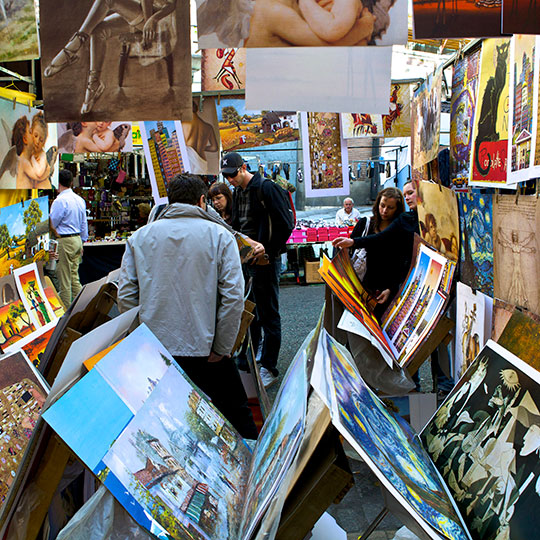 If you visit Madrid, you are sure to notice the charming little shops that appear to be stuck in the past located near impressive buildings housing the most modern brands. The city has a generous handful of shops dating back to the 19th century and still standing, defending their artisan methods and a history to be preserved. You will see them especially around the Plaza Mayor square and in the nearby streets, such as Calle Arenal, Carretas and Mayor. Their signs and their shop windows are a delight and you will find all sorts, from apothecaries to shops selling shawls, hats, headdresses and capes.In the area known as the Barrio de Las Letras (it takes its name from the facts that literary figures, such as Miguel de Cervantes, Quevedo and Góngora used to live here), there are also some examples of these traditional shops. In addition, on the first Saturday of the month, the vendors organise the Ranas Market with discounts, special menus and activities taking place along the street. 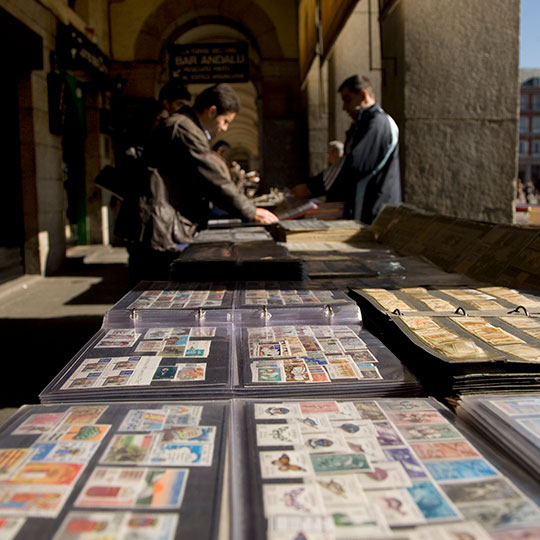 From market to market

Talking of markets, it is becoming increasingly fashionable to sample gourmet products at food markets, or buy them to eat at home. Did you know that in Madrid there are several refurbished gourmet markets that allow you to do just that? For example, San Miguel Market opened its doors in 1916 and nowadays, as well as being full of delicatessen stalls, it is still one of the best examples of iron architecture in the city. The list of these types of markets is getting longer by the day. As well as fine foods, alternative flea markets are also here to stay in Madrid, held on specific dates, where you can find anything from designer furniture to unique jewellery, organic food, second-hand clothing, records, etc. They are usually held in unique places, such as the old railway station in Delicias. Look at all the options. 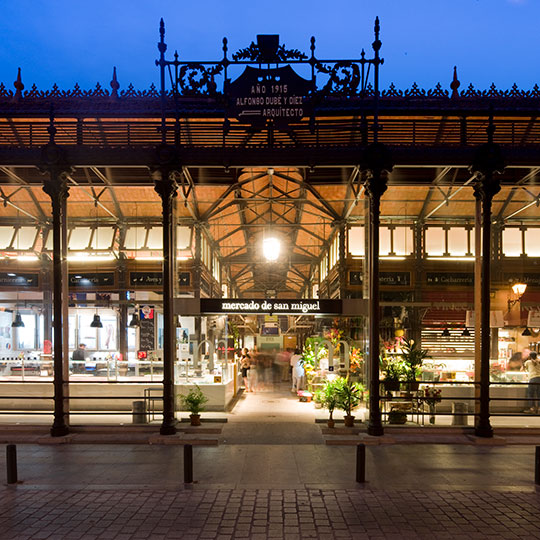 If you are looking for souvenirs of Madrid, you will find gift shops throughout the city centre. There is even an official Madrid Shop at the tourist office in the Plaza Mayor square.Over and above the typical souvenirs, you can acquire unique items, such as postcards produced by designers, illustrated maps, artisan liqueurs, violet candies, etc. In the area around Puerta del Sol and Plaza Mayor, try strolling through streets, such as Corredera Baja de San Pablo, where you will find the most modern concept stores and “hidden” shops, such as galleries selling signature furniture, where you can also grab a drink and a bite to eat. And a piece of advice, you will also find beautiful pieces in the art galleries on streets like Calle Doctor Fourquet (in Lavapiés) and in museum shops, such as the ones at the Prado, Thyssen and Reina Sofía museums. 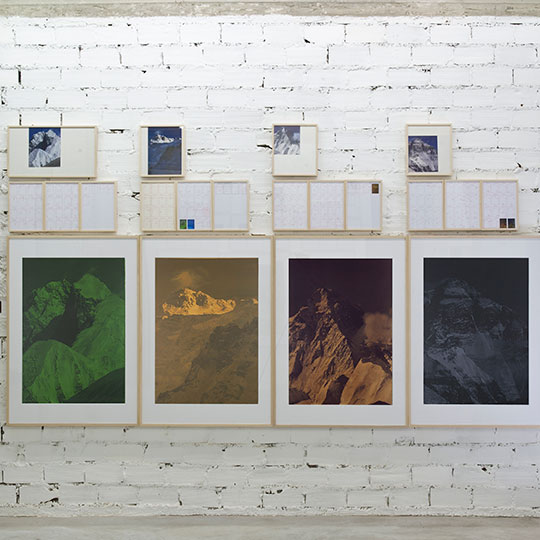 Let's not forget other important areas for shopping in Madrid, such as the Paseo de la Castellana and the Azca financial district, where you will find one of the largest flagship stores for Zara (the most worldwide-renowned Spanish brand), for example.Would you like to visit a shopping centre? Even though there are some central ones, most of these tend to be located on the outskirts of the city and can be a good option for spending all day shopping with your family. 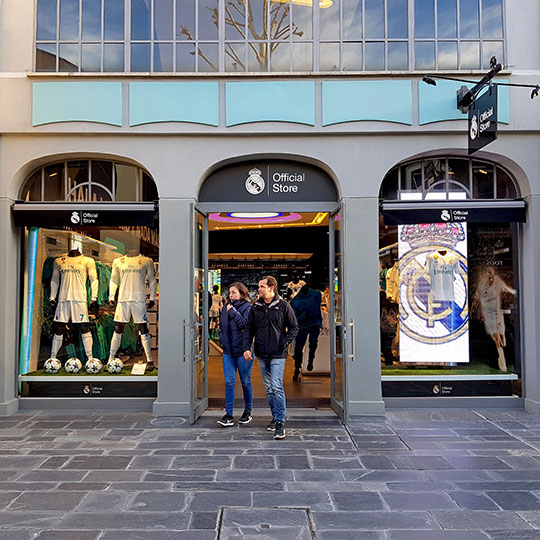 When shopping in Madrid, remember that if you live outside the European Union, you can ask for taxes to be deducted using the DIVA tax free electronic form. Ask for it at each establishment. 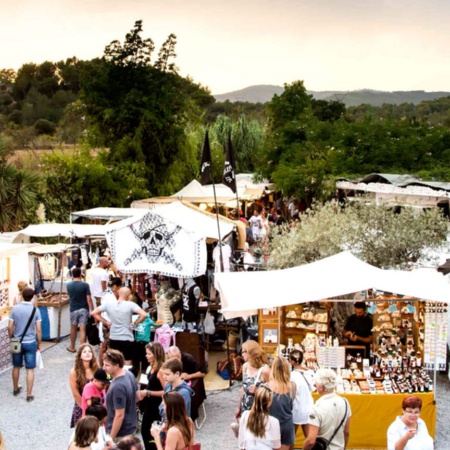 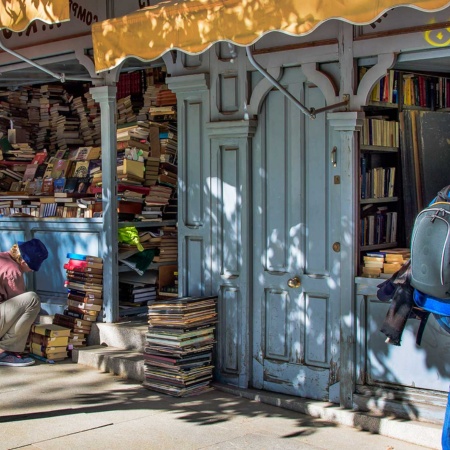 The most original places to shop in Spain: shops with a hundred years or more of history behind them to whisk you back to the past 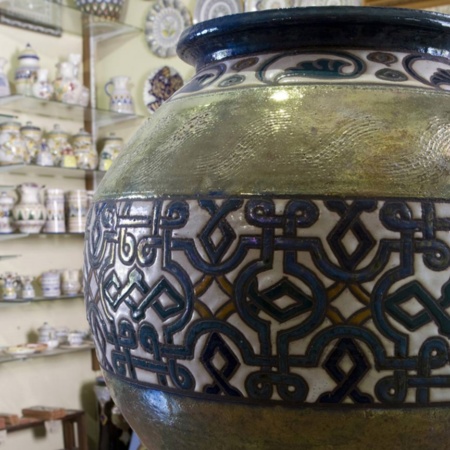 Reinventing the souvenir: 10 typical and original things to buy on your trip to Spain 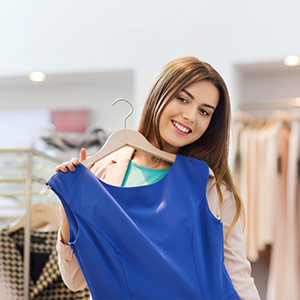