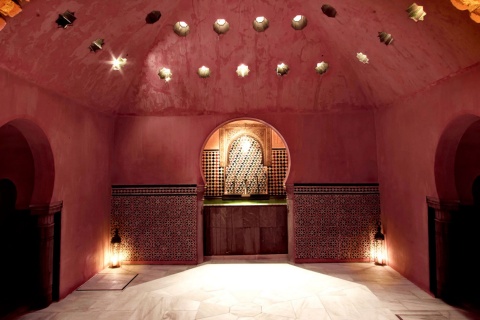 A bath with history

As the heir to the culture of Al-Andalus and the thousand-year-old tradition of the hammam, Granada is the ideal Spanish city to take the plunge and try an Arab bath. These baths are spaces where you can relax in water of different temperatures, soothed by the gentle background music, the murmur of the water and the scents of other eras, watching how the light filters through the mosaic ceiling and the candles flicker… These traditional baths are complemented by massage rooms and tea rooms. You can find several Arab baths in the city. Enjoy a place where time seems to stand still.

Let’s go to the foot of the spectacular Alhambra. This is a unique setting, and the Arab bath here is also unique - it was the first to be opened in Spain, five centuries after the Catholic Monarchs decided to close them down. After a day exploring the gardens and palaces of the Alhambra, it’s time to relax in the warm, hot and cold waters. There is also a steam room and a room for massages such as the traditional kessa: as you lie on a hot stone bed, a thick layer of natural soap is applied to your body with a cotton fibre glove. After floating in the water or sipping a mint tea, it’s easy to imagine yourself in bygone times, when the baths were social centres as well as places to relax. 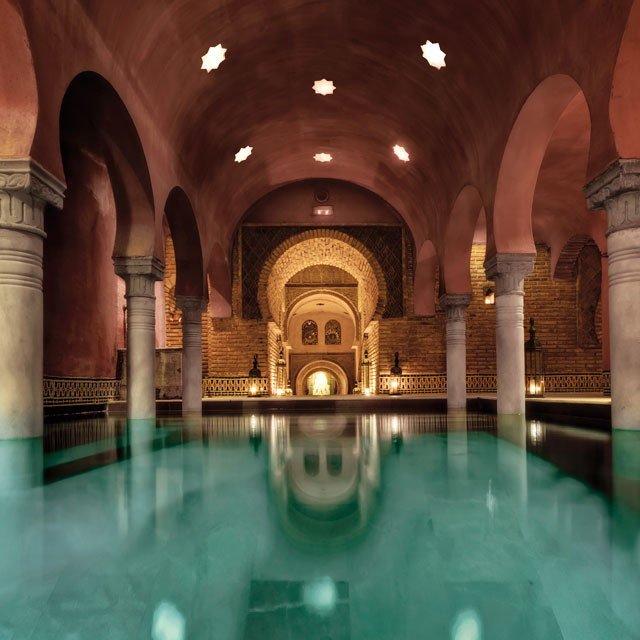 Although they are in the Hotel Maciá Real de la Alhambra, the name is not a coincidence. These baths are a replica of the ones in the Alhambra. Like a journey back in time, they offer circuits like the “Árabe”, the “Real de la Alhambra” and the “Califa”, including Turkish baths, cryotherapy, and tea tastings.

In the historic Magdalena district, in the city centre. The sensation of travelling through time to the Granada of the Nasrid dynasty seems quite possible in this serene setting. You can choose an aromatherapy massage with organic oils, as you gaze at the blue domes… Another option is an exfoliation treatment, called the Ruta de la Seda (silk road) in honour of the Alpujarras region of Andalusia which once made the finest silk. A woman relaxing in the Arab baths © Hammam Al Andalús

The final suggestion doesn’t involve bathing, but it is a time-travelling treat. As well as the luxurious baths of Baños Reales and the Comares de la Alhambra, Granada has historic Arab baths to visit. These are the 11th century baths of El Bañuelo, perhaps the oldest and best-preserved in Spain. They are among the few that escaped the destruction of the Catholic Monarchs, and their brick vaults with star-shaped openings are a wonderful sight. 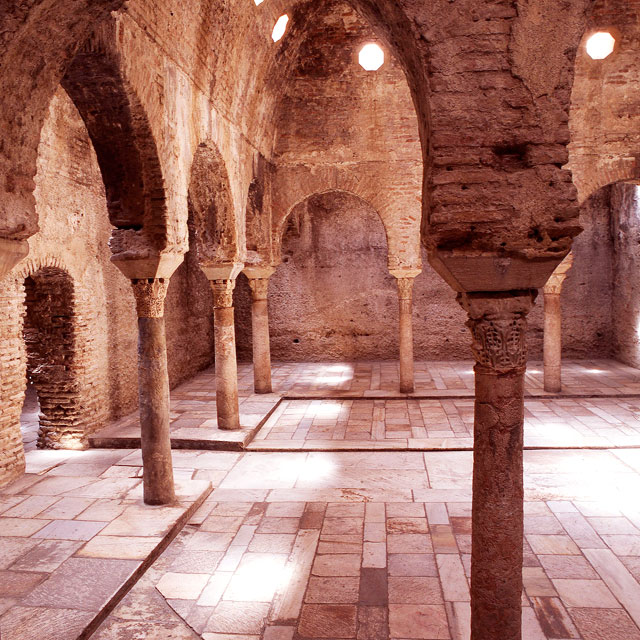 Other Arab baths near Granada

If you’re planning to visit other villages near Granada, you can find Arab baths there too, some in the characteristic caves of the region, such as El Ventorro in Alhama in Granada or Hammam-Kabir in Guadix.

Sensations in the Arab baths of Granada © Hammam Al Andalús
Find out more about...
What to do