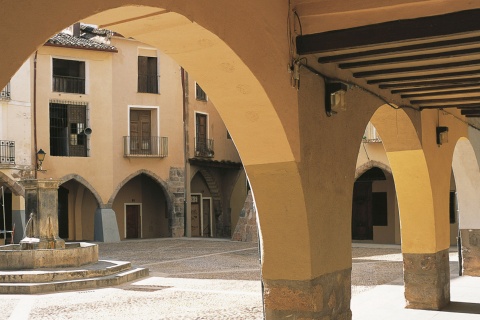 In the spurs of Sierra Espadán we find Onda, a historic village in the interior of Castellón, which holds an important monumental heritage, and has a long tradition in the production of ceramics.

Inhabited since the times of the Iberians (6th-1st centuries BC), Onda reached its maximum splendour during the Middle Ages. The days the town lived under Arab rule (10th-13th centuries) gave the historic quarter its urban layout, which was declared a Historic-Artistic Site, and a Cultural Object.

The historic quarter stretches about the "castle of the 300 towers", where we can see the arcaded square of Almudín, and the arcade of Sant Pere. Also worthy of note is the church of Sangre, built by the Templar Knights in the 13th century, as well as the numerous hermitages that can be found in any of the town's streets. But we must not forget its two museums: the Natural Science Museum of El Carmen, and the Valencia Museum of Ceramics, which documents the town's long ceramic-manufacturing tradition.