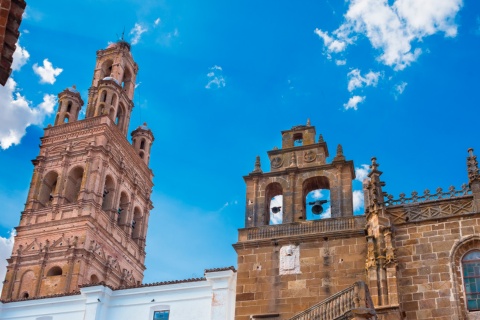 Llerena, situated in the Badajoz region of Southern Campiña, has a rich monumental patrimony, the legacy of its glorious history.

Home to the Grand Masters of the Orden de Santiago (the Order of Saint James) and the Order of the Inquisition, the historic quarter gathers together a number of convents, churches and palaces where the Gothic-Mudejar and Baroque styles overlap. This white village near the provinces of Seville and Cordoba will present us with an exquisite cuisine with many lamb dishes, from livestock raised in the Extremaduran pasturelands. By sampling the delicious food, travellers will be able to go deeper into the traditions and customs of this land, the birthplace of many discoverers and conquerors

This rich town in Badajoz was already widely known during the Muslim period as Ellerina, but it was not until its admission into the Christian kingdoms that it had its cultural bloom. These lands, reconquered in the 13th century, had to be repopulated and farmed, so the Grand Masters of the Order of Saint James of the Sword settled there. Years later, the High Court of the Inquisition also settled in Llerena, contributing to the development of the city. The new buildings were influenced by Mudejar architecture, since Islamic culture was part of life in Lower Extremadura between the 8th and the 13th centuries. So, the buildings erected between the 13th and 16th centuries beautifully combine the Mudejar elements inherited from Muslim artisans with Gothic elements. It is important to mention that Gothic art reached Extremadura with centuries of delay compared to the rest of the peninsula. The roofs, made with wood and exposed masonry, are frequently fixed with pointed arches, ogive vaults and stone ashlars. The religious, civil and military architecture, encouraged by the Military Orders, was enriched by Baroque art with the arrival of the enormous wealth that was brought from America. Extremadura, the birthplace of innumerable discoverers and conquerers, was one of the Spanish regions that benefited most from the colonization of the New World.

By taking a stroll around the historic quarter, visitors will be able to admire beautiful constructions such as the church of Our Lady of Granada, the Courtyard of the High Court of the Inquisition and the Palace of the Bishop. The belltower of the temple is a great example of Mannerist art, while the side arcades and the side-chapel are already Baroque. In the interior, the Gothic carving of the Virgin of Granada is venerated. The city's close relationship with medieval Military Orders has left behind a rich legacy of beautiful religious buildings, such as the church of Saint James, where the last Grand Master of the Order of Saint James of the Sword is buried, as well as the convents of La Concepción, La Mercedand Santa Clara. In the latter, visitors will find artwork by Juan Martínez Montañés, a master of the Spanish Baroque, such as his "Saint Hieronymite". It is also worthwhile to visit the hospitals of San Juan de Dios and Santa Catalina. When it comes to civil architecture, the Maestral and Episcopal Palaces, the Town Hall and the Palace of Zapata have beautiful courtyards, noble corridors and ample rooms. Numerous embalzoned houses also have brick structures and plaster ornaments. Llerena is also a great place to try the most traditional Extremaduran cuisine. The "golden soup" and "molinera soup" with cumin and chilli peppers, become "gazpacho" (a cold soup with tomato, pepper, cucumber, garlic, etc.) when summer comes. The hare stew and the partridges with sage compete with the delicious roast or stewed lamb. For dessert, try the fabulous sweets made at the convent of the Order of St. Clare.

These succulent dishes are also found, with slight variations, in the different outskirt towns. Fregenal de la Sierra, in the Southern Sierra, is a beautiful haven of whitewashed houses and monumental churches. The hermitage of the Virgin of Remedies and the churches of Santa Catalina and Santa Ana, along with the Bullring, the old Arab citadel and the Templar Fortress, conform the principal points of interest. Zafra, a town you cannot afford to miss along the Ruta de la Plata (Silver Route) in Extremadura, is also quite near. At the foothill of Sierra Castelar, Zafra has an Alcázar (fortress) that was declared Historic-Artistic Site, who presently houses the town's Parador de Turismo. The medieval layout of the city stretches out from this spot, with Plaza Grande and Plaza Chica being the most important meeting points. Ancestral homes, convents and churches make up a compound of great architectural harmony. Slightly further on is Badajoz, the capital of the province, where visitors will discover Arab walls, interesting monuments and picturesque streets and porchesOn the other hand, Mérida is heir to a splendorous Roman legacy, as it can be observed in its archaeological compound (the theatre, the amphitheatre, the circus, the temple, the arch, many houses, the aqueduct, the reservoir, etc.) declared World Heritage Site by the United Nations Organization for Education, Science and Culture, UNESCO. Also included in the Ruta de la Plata, Merida has a very worthwhile National Museum of Roman Art, built by Spanish architect Rafael Moneo. The city also offers the excellent International Classical Theatre Festival, which takes place every summer.