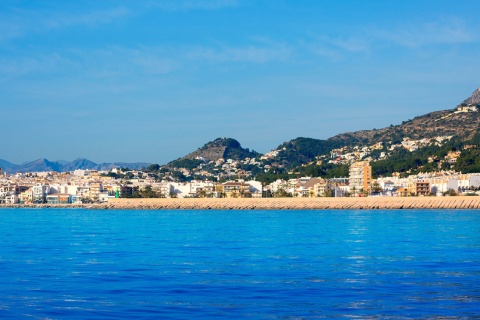 Located between the capes of San Antonio and Nao, Jávea is one of the most important tourist destinations on the Costa Blanca.

The historic quarter, located two kilometres away from the coastline, preserves a beautiful architecture, with emblematic monuments such as the church of San Bartolomé, the city's neuralgic centre. One of the main attractions of this region is its coastline. No less than twenty kilometres of sands and hidden coves where visitors can enjoy a swim and a wide variety of water sports.

From Cape Nao to Granadella Cove, Jávea offers visitors twenty kilometres of beaches and coves, ideal to enjoy the sun, the sea and water sports. This town on the Alicante Costa Blanca shows its more tourist-related side around the area of the harbour. In addition to a wide range of accommodation, restaurants and recreational activities, in the harbour visitors can enjoy all types of water activities, such as sailing and windsurfing or a boat trip to Denia. The beach of El Arenal is one of the most emblematic on the coast of Jávea. In this place, next to the Fontana Canal, sits the Parador de Turismo “Costa Blanca” (Inn), at a privileged location only a few metres away from the beach. Between the islands of Portixol and Descubridor is one of the most beautiful sections of the coastline. Crystal waters and a gorgeous seabed make this the ideal setting for scuba diving. This water sport is also popular at Granadella Cove which is, with its fine, golden sand, another attractive spot in the coast of Jávea.

Located on a plain, at the foot of the Montgó Massif, the historic quarter of Jávea was erected inland, around the fortified church of San Bartolomé, a beautiful Isabelline Gothic building made to defend the city against pirate attacks. On the streets of the historic quarter, visitors will be amazed at the local architecture, the grilles on the windows of housesand the lintels of "coarse" stone. Another must in the journey around the city centre is the Archaeological and Ethnographic Museum, where you can learn about the history of the town. While, on the harbour, it is worth visiting the church Our Lady of Loreto, which resembles the keel of a ship.

Culture, gastronomy and the outskirts

Jávea bases its gastronomy on typical Mediterranean foods. As is common to the rest of the Valencian towns, the most popular dish is rice. Paella is perhaps the most widely-known recipe, which is prepared here with beans and turnips or baked. The fish from this region is served both stewed or fried, as well as in soup. Garlic and oil are the main ingredients of the emblematic sauce salsa ali-oli, served to accompany numerous dishes. Almonds, raisins, figs and oranges are the most typical fruits of this region and are usually included in dessert recipes. Almond cake, turrónand ice cream are among the most tempting. To go with it, Jávea offers wines with the label Designation of Origin - Alicante, misteleta (sweet wine) and horchata (a soft drink made with tiger nuts). Jávea celebrates the holiday of the Virgin of Carmen on the 16th of July. A few days later, the weekend before last, the Moors and Christians festival takes place. The outskirts of Jávea offer endless possibilities. The lighthouses and Cabo de San Antonio Marine Nature Reserve are the destinations of excellent excursions for nature lovers. The visit may continue to the Montgó Nature Reserve, where the outline of the mountains dives into the Mediterranean, creating spectacular cliffs. It is also possible to visit the attractive town of Denia, the capital of the Marina Alta region. Teulada rises on the other side of Cape Nao. In addition, next to Peñón de Ifach Nature Reserve is the town of Calpe, a harmonious place that has managed to combine the preservation of its monumental heritage with touristic infrastructures. Another interesting monumental town in the middle of the Costa Blanca is Villajoyosa, the capital of the Marina Baja region. Across Sierra de Aitana, the northern inland region of the province awaits, offering a journey through Cocentaina, an important medieval town, with tiled houses and Arab streets. The mountains of Alicante conceal the rough outline of Carracal de la Font Roja Nature Reserve on the northern side, as well as the town of Alcoi, whose medieval historic quarter celebrates the festivity of "Moors and Christians" every year, declared of International Tourist Interest.