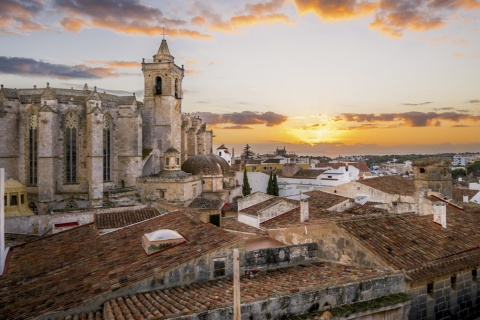 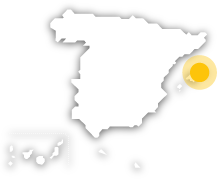 On the far western end of Minorca lays the city of Ciutadella, the old capital of the island. Its remote origins have left an important archaeological heritage in the area, in the form of megaliths such as the "taulas" (megalith), the Talaiot and the navetas.

This beautiful port city's historic quarter, called Es Born, is surrounded by medieval streets filled with palaces, churches and fortresses. Not far, visitors will discover excellent Minorcan coves and beaches, as well as remote fishing towns. To all this you must add the delicious traditional cuisine from Minorca, based on seafood and fish.

There are indications to the existence of primitive human settlements on the location of the present city of Ciutadella, as well as in the rest of Minorca, dating back to 2000 B.C. For instance, the abundance of archaeological sites that are still preserved, such as the Taulas (megaliths in the shape of a "T"), the Talaiot (a sort of tower) and the Navetas (a funeral construction in the shape of an up-side-down vessel). These remains make of Minorca a true open-air museum. The Roman colony of Lamo (the present Ciutadella) would become relevant in 73-74 A.D., when Emperor Vespasian gave the city the status of municipality. In the High Middle Ages, Ciutadella was the political and administrative centre of the islands, a title that it would maintain through the centuries of Arab rule. From the 13th century on, Minorca came under Christian rule, after being conquered by King Alfonso III. The city preserved its condition of capital until the British, who ruled the island in the 18th century, decided to transfer it to Mahón. Despite this fact, Ciutadella has continued to be the see of the Minorcan Bishopric.

Ciutadella is a city to explore by foot, discovering its charming medieval streets. Es Born, the old parade ground of the medieval city, is located in the middle of the historic quarter. An obelisk dominates the square, traditional stage to a number of festivities and social events that take place in the city. Among the most significant buildings that face this square, the City Hall stands out, built on top of the old Arab citadel. The present city hall dates back to the 19th century and still preserves some remains of its primitive construction. It is also possible to visit, during certain periods of the year, some of the rooms of the nearby Palace of Salort. Next to it is the Palace of Vivó, one of the most emblematic in the city, with its peculiar Neoclassic red façade, ornamented with traditional island motives. The cathedral, also around the centre, was commissioned in the 14th century by King Alfonso III, to be built on top of the High Mosque that existed in Ciutadella during the Arab rule. From the old mosque, only the minaret is preserved, though turned into a belltower. This monumental Catalan-Gothic temple has one nave and six chapels, including the remarkable Chapel of Animas, from the 18th century. The importance of the city as a religious centre lead to the existence of many other religious buildings of great value, such as the convent of Santa Clara and the Cloister of the church of Socors, part of the old Augustinian Monastery. Across from the cathedral is the Neoclassic façade of the Palace of Olives, another ancestral home. The interior of the building has some frescoes depicting animals and a Roman figurine that was found in the archaeological site of Pujol Antic, in Minorca. No less beautiful is the façade of the Palace of the Count of Saura, whose last remodelling dates back to the 17th century. A beautiful panoramic view of the port, which is located in a cove at the foot of the city, can be seen from the "mirador" (viewing point), behind the City Hall. The Bastió de Sa Font, in the centre of Ciutadella, is one of the five bastions that was part of the old walls that surrounded the city, which were built in the 16th century. The precinct is the present site of the Municipal Museum. In addition, the Castell de Sant Nicolau houses an exhibition about the Minorcan Biosphere Reserve.

Culture, cuisine and the outskirts

The sea provides some of the main ingredients of Balearic cuisine. The lobster casserole is perhaps one of the most prestigious Minorcan dishes, without forgetting, of course, the famous mayonnaise, made with egg, olive oil and garlic. Other island recipes include sèpia al forn (baked cuttlefish), rice dishes made with fish, or tumbet (a baked dish made with potatoes, fried peppers, aubergine and tomato sauce). For dessert, nothing better than a traditional ensaimada (a kind of spiral-shaped bun, covered with powdered sugar), or a cheese with the label Designation of Origin - Mahón. Majorcan gin is one of the most traditional drinks in the island, flavoured with Juniper cones. The most important event in the holiday calendar of Ciutadella is the celebration of the festivity of San Juan, on the 23rd and 24th of June. During those days, horsemen ride their horses around the city centre, among great popular excitement. In terms of the archaeological patrimony in the area, the Naveta des Tudons, a funeral megalith from the pre-Talaiotic period (14th century B.C.) must be mentioned. The beaches are one of the main tourist attractions in the island. Near Ciutadella, the coves of Mitjana, Trabalúger and Galdana are the most visited coastal destinations in Minorca. Other towns are also very interesting to visit, such as Ferreríes. In it, the church of Sant Bartolomeu (1870) is worthy of mention, in addition to its beautiful coves, such as the Calderer and Pilar. In the nearby hill of Santa Águeda lays the Arab castle of Sent Agayz. Es Mercadal, located at the foot of Mount Toro, the highest peak in the island, is known for its excellent cuisine and crafts, especially handmade shoes. Also in this municipality is Fornells, a small fishing port in the northern coast, built around the castle of San Antonio (16th century). The eastern coast of Minorca holds the principal damp area in the island, where you will find the Nature Reserves of S’Albufera des Grau, I’lla d’en Colomi and Cap de Favàritx. The park centre has a shallow lagoon, which is a perfect marine-bird observatory. The unusual natural environment of Minorca, in addition to its cultural life and sustainable socio-economic development, allowed the 1993 declaration of the island as a Biosphere Reserve by UNESCO. 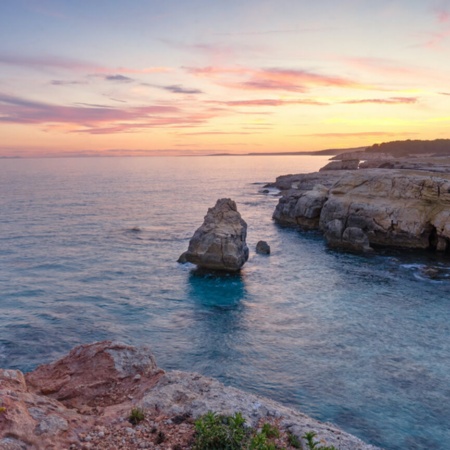 10 ideas for a trip to Menorca for two