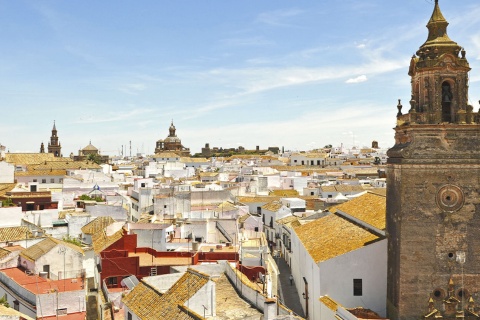 The tower of the Church of San Bartolomé dominates the view of Carmona (Seville, Andalusia)

Situated on the plain of the River Corbones, Carmona is a city which stands out due to its size and the traces left by the various cultures that have populated it during its extensive history.

Its churches, palaces and city walls form part of the broad artistic heritage it houses in its historic quarter, dominated by the imposing image of its Arab fortress, the Alcazar del Rey Don Pedro. Its situation, a few kilometres from Seville, allows you to enjoy the enormous monumental and artistic heritage, as well as the numerous possibilities for leisure offered by the capital of the province of Seville. Carmona also allows you to enjoy gastronomy in which the most succulent recipes of Sevillian and Andalusian traditions are represented.

Populated since earliest times, Carmona has a long history which has seen the passage of the widest variety of cultures. Thus, it was first of all inhabited by Tartessans, and later became a Phoenician colony. Centuries later, Romans and Arabs became established in the area, civilizations which have left their own impression on the rich monumental legacy hidden in this Sevillian town. Of Roman origin is the walled enclosure, to which the Cordoba and Seville gates and the amphitheatre belong. Also Roman is the necropolis (I B. C.), located on the outskirts of the city, which has hundreds of tombs and rich burial chambers excavated from rock. Within its old walls, the old quarter of Carmona has been able to retain its appearance of an Arab medina, with streets in which beautiful displays of civil and religious architecture can be seen. Above the outline of the city can be seen the church of Santa María la Mayor, built in the XV century over a former Arab mosque Other churches of interest are those of San Felipe ( XIV c.), in the Mudejar style and San Pedro, baroque, whose tower is similar to that of the Giralda in Seville. At every step you can see Mudejar style houses, built between the XV and XVII centuries, Renaissance and baroque buildings. Some famous buildings are the palace of los Aguilar, the lRueda palace or the House of the Marquis de las Torres, now the site of the city's Museum of Archaeology and Customs. A journey through Carmona should continue with a visit to the eigtheenth century Convent of the Discalced and the Alcazar of the Seville Gate, of Carthaginian origin. Or, if you prefer, you can go up to the highest point in the city. Here is where the Almohad King Don Pedro Fortress rises, now a Parador. Built in the Arab period, the original fortress was the residence of the monarchs of Taifa. In the XIII century, under the reign of Pedro I “The Cruel” major reformation work took place on the fortified precincts until they acquired their current appearance. According to legend, this luxurious palace became one of the favourites of the Castilian king. Carmona offers many possibilities for leisure. From hiking or horseriding to playing a round of golf on one of the excellent golf courses existing around the capital of Seville province.

Gastronomy and the Outskirts

In Carmona you can try out some of the many delicious recipes of local gastronomy, with eggs a la flamenca (with tomatoes, spicy sausage and peas), salt cod or partridge stew, spiced Carmona spinach and ardoria (made with tomato, bread, olive oil and cucumber). The best accompaniment will always be any of the famous Andalusian wines. Strategically situated in the centre of the province, Carmona has become the starting point for getting to know some of the most important towns in the province of Seville. Only 30 km. away is Seville, where we can visit, among other things, the Cathedral, the Reales Alcazares and the Archive of the Indies, all of which have been declared World Heritage by UNESCO. On the outskirts of the capital is the Roman city of Itálica, where you can admire its theatre and amphitheatre, which is one of the largest built during the Roman Empire. We can also visit Écija, known as the “city of towers” and one of the most important monumental ensembles of the province; Osuna, a ducal town with a collegiate church and University; Estepa, which conserves its walls and abundant examples of religious architecture; and Marchena, with its numerous gates in the city walls and its Ducal square. Part of the marshlands and reserves of the Doñana National Park, declared World Heritage and Biosphere Reserve by UNESCO is located in Seville province. The Natural Park of Sierra Norte takes in the sector of Sierra Morena, between Badajoz, Huelva and Cordoba. Within its limits, Cazalla de la Sierra offers well preserved popular architecture. 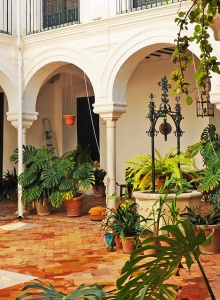