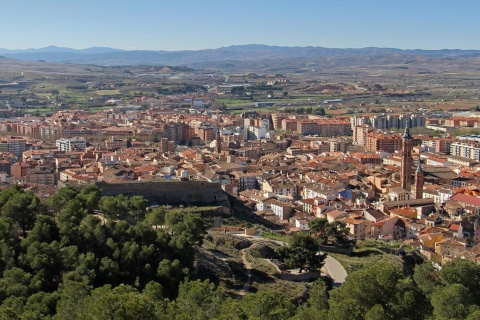 Calatayud, a traditional crossroads, is an important city in southwest Aragon whose past goes back to Roman times. In its historic centre, some of the best examples of Mudejar architecture in Aragon are preserved.

Calatayud has its most important historical antecedent in the founding of Bilbilis Augusta, a Roman city that was the birthplace of illustrious characters, such as the poet Martial.

The arrival of the Arabs in the area, at the beginning of the 8th century, led to settlement in the city's current location around the Castle of Ayub (Qal’atAyyub), which gave rise to the placename. Its importance went on throughout the centuries so that in the 19th C. it came to be the fourth province of Aragon. Nowadays it is a county capital and city of monuments. Calatayud is situated at the foot of a site formed by five castles from the Arab era, considered one of the oldest defensive systems in Muslim Spain. Of the Castle of Ayub, three octagonal towers remain, as well as many stretches of wall. The city brings together countless aristocratic houses and Renaissance palaces. In the Plaza Mayor stands the City Hall and the Inn of Dolorés, an establishment which refers to a legendary woman who has inspired famous "copla" songs.

Without doubt, though, one of the city's greatest attractions is the fact that it, in its historic centre it houses one of the best Mudejar architectural sites in Aragon. Within this, the Collegiate Church of Santa María, declared a National Monument, is outstanding. Built in the 14th century, in it you can appreciate the diversity of styles, which run from Gothic-Mudejar to Baroque, passing through the Renaissance. The oldest parts of the building correspond to the cloister - Mudejar with a rectangular plan - and the apse, with pointed arches at the bottom and semicircular ones at the top. The octagonal tower was built during the 15th and 16th centuries, basing its structure on an Arab minaret. On the outside, it is decorated with bricks tracing geometric motifs and it is topped with an 18th-century Baroque spire. In the Plaza de San Andrés is the parish church with the same name (15th-16th centuries), presided over by a stylised Mudejar tower, which stands out on the city skyline. The church, declared a National Monument, consists of three naves covered with groined vaults. As for the tower, it has an octagonal plan and has a richly decorated exterior. The Church of San Pedro de los Francos, built in the first half of the 14th century, belongs to the Gothic-Mudejar style. The building, with three naves, has a belltower on its southern side. It has a minaret structure and had its top taken off in 1840. Inside, the base of the organ, in Gothic-Mudejar style, deserves a mention. One of the oldest Mudejar monuments in the city is the Sanctuary of Nuestra Señora de la Peña. The church, built between 1343 and 1350, was restored in the 19th and 20th centuries. Some details, like the plasterwork with geometrical motifs decorating its walls, reveal its early Mudejar origins. It is also worth going to the Collegiate Church of the Santo Sepulcro (14th C.), in Gothic style with Mudejar elements. Inside, it houses a cloister with a square plan and various buildings, like the collegiate church itself, the stables and the library. This rich artistic heritage is completed with visits to the Church of San Juan, which inside houses pictures by Francisco de Goya, and the Museum of Calatayud, which dedicates a large part of its exhibition to finds from the old city of Bilbilis, one of the most important Roman sites in Aragon.

Around Calatayud are various places with Mudejar-style monuments, like Ateca, Morata de Jiloca, Embid, Maluenda, Tobed and Torralba de Ribota. Other places of interest are Daroca, a walled town with Arab remains; Ariza, which preserves its Jewish quarter; La Almunia de Doña Godina, the outstanding fruit and horticulture centre of Aragonand Fuendetodos, where the house where Francisco de Goya was born and the Engraving Museum can be found. There are also various spas in the area. At Alhama de Aragón, Paracuellos de Jiloca or Jaraba you can enjoy waters offering all kinds of therapeutic treatments. Another option is to go to Zaragoza. In the Aragonese capital you will find very beautiful monuments like the Basilica of the Pilar, the Cathedral and the Aljafería Palace. On 12 October the city dresses itself up to celebrate the Festival of the Pilar, declared of Tourist Interest. The routes around Calatayud enable you to discover very diverse landscape. The Monasterio de Piedra (Stone Monastery) is a natural area with waterfalls and underground galleries running through exuberant vegetation. The park is within the boundaries of an old 16th-17th century monastery. Gallocanta lake, one of the largest steppe lakes in the country, is a wetland where thousands of migratory birds find sanctuary. Between the towns of Bello and Tornos there is an interpretation centre for visiting this unusual ecosystem. Calatayud's cuisine is largely supplied with products coming from the fields beside the Rivers Jalón and Jiloca. However, it shares some dishes with the rest of the province. Borage, typical of the Ebro Valley, is the main feature of many dishes, as are sweet onions. Roast lamb can be very well accompanied with breadcrumbs stewed with grapes. Neither should you forget cold meats and cheeses, always accompanied by elaborate wines with their own Denomination of Origin.