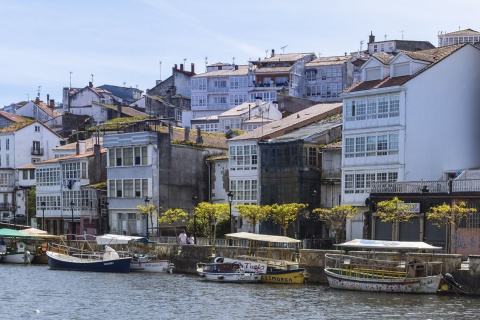 This town, washed by the Mandeo river and its tributary, the Mendo, celebrates numerous fairs and trade shows throughout the year.

Betanzos was named "Brigantium" by the Romans. The town sits on a hill where there used to be a hill-fort, on the mouth of the Betanzos estuary, where sea mixes with the freshwaters of the Mandeo and Mendo rivers. It was one of the seven capitals of the Old Kingdom of Galicia, and it was declared a Historic-Artistic Site.

Three Gothic churches lend it its character: Santiago, Santa María do Azogue and San Francisco. The latter has the most fascinating medieval sarcophagi, such as the tomb of Pérez de Andrade, held up by two animals that symbolise his lineage: the wild boar and the bear. Also remarkable are the "pazos" (Galician country house) of Bendaña, Taboada, and Lanxós tower, as well as a surprising park named "O pasatempo", whose makers, who had emigrated to America, where ahead of their time and of the concept of modern theme park. In Betanzos we can try the local wine, light and fruity, served in rustic establishments whose only emblem is a bay branch above the door.