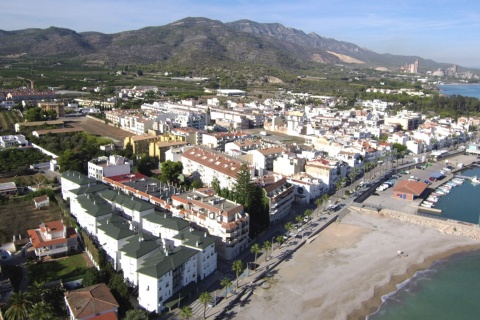 A fishing town with exquisite gastronomy

Alcanar is in lands washed by the Ebro River.

Its origins go back to the Iberian settlement of Moleta del Remei (7th-2nd centuries BC), although it was later occupied by the Romans, and then by the Moors, who introduced numerous agricultural and irrigation techniques in the countryside, used to this day. In the Middle Ages it became part of the Crown of Aragon, and, centuries later, defensive walls were built around the town (Torre del Carrer Nou Tower remains to this day). Defensive towers, such as that of Sant Pere, were also built on the coast.

Some of the most important attractions here are the sea and the local beaches. Its 12 kilometres of clean, peaceful beaches and coves are one of the region's gems. Water sports, hiking and outings to protected nature areas are other things to do in the village, from a broad array of options available. Close to Alcanar you will find Las Casas, a small fishing village, outstanding for its traditional maritime cuisine (prawns, rice dishes and soups with fish, amongst others).