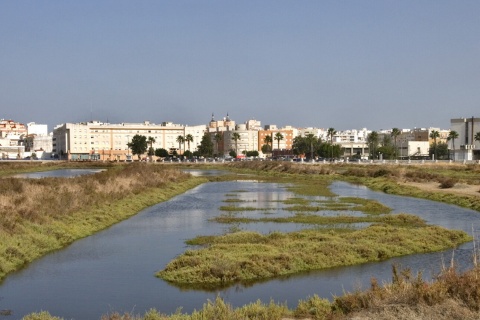 A melting pot of ecosystems

In the Reserve similar ecosystems merge, namely cliffs, beaches, dunes, lagoons, marshes estuaries, that invite you to enjoy both the landscape and the important fauna and vegetation.

The bay extends along five kilometres between Punta de San Felipe and Santa Catalina castle, in Puerto de Santa María. The ensemble offers highly distinct environmental feature, and it is this conglomeration of habitats that makes it ecologically important. Levante beach and the coastal and dune area spreads between Cortadura and la Barrosa, as well as the marshes of Sancti Petri, Trocaderos and los Toruños, are the most fascinating land areas. The salt flats, occupying more than 5.500 hectares are another significant area, and their use dates back to the time of the Phoenicians. Its fauna of invertebrates (shrimps, clams, prawns, common cockles) and fish (sea bream, sole, grey mullet, comber, red mullet) besides being extremely important from an ecological point of view, means that the gastronomic culture of the region is greatly enhanced. In and around the bay you an observe forests of pinion pine trees. In the less salty zone, areas of reeds, bulrushes and saltmarsh bulrushes have formed. The vegetation of marshes is also highly rich and varied. The Reserve includes the Nature Spots of the Island of Trocadero (290,4 hectares) and Sancti Petri Marshes (174,1 hectares).