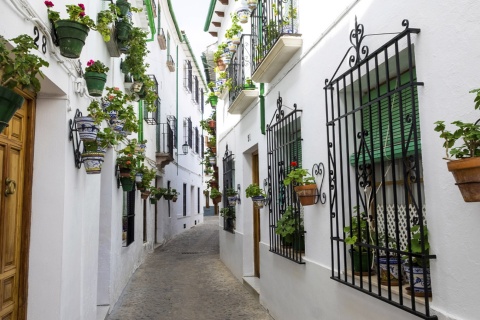 In the southeast of the province of Cordoba, at the foot of fertile plains and under the shelter of the mountains of the Nature Reserve of the Sierras Subbéticas, lies Priego de Córdoba.

This is one of the obligatory stops on the Route of the Caliphate, the European Cultural Itinerary that crosses Andalusia from Cordoba to Granada. Among its monumental heritage, the traveller will enjoy baroque style civil and religious constructions built during the city’s long centuries of splendour. The gastronomy of Priego, topped off with olive oil with its own Designation of Origin, will complete any urban tour.

Priego's exceptional setting was valued by Iberians and Romans, as confirmed by the remains belonging to this period of history. Hispano-Muslim Baguh was very important in medieval rebellions and insurrections, until in the 13th century Fernando III incorporated it into the Christian kingdoms. This became definitive a century later, thanks to Alfonso XI. A descendant of Gonzalo Fernández de Córdoba, the "Gran Capitán", was named the first Marquis of Priego in the 15th century. From this time onwards, and with the addition of the 18th century textile industrial revolution, the city transformed its appearance and enriched itself with beautiful examples of Baroque art.Priego's historic quarter is in the highest part of the town. This is where the defensive system of the Castle was built, of which some curtain walls and three towers are preserved. Horseshoe arches and Mudejar capitals tell of this site's important legacy from Moslem Andalus. A pitched roof crowns the Keep. Beside it lies the La Villa district, a set of cobbled streets with peaceful squares, whitewashed façades and narrow alleys. The layout is bounded by the walls and towers where the broken relief did not offer enough protection against possible attackers. The tour of Priego's Baroque art can begin at the Mayor de la Asunción parish church, where the exterior Gothic-Mudejar features become Baroque wood and plasterwork inside. One of its artistic gems is the Sagrario chapel, where building work started in the 17th century. Another good example is the church of La Aurora, designed by Juan de Dios Santaella on the site of an earlier 15th century building. The side-chapel, the main front, the plasterwork and the marble are the main attractions which visitors should stop and look at.Another two churches, those of San Francisco and San Pedro complete this cultural tour. The pattern of remodelling and decorating 15th century constructions with a varied collection of plasterwork, reredoses and sculptures was applied here too. Among the civil monuments, the front and arcaded courtyard of the Carnicerías Reales, the birthplace of Aniceto Alcalá Zamora - first president of the 2nd Republic - and the fountains of La Salud and El Rey are outstanding. These are Neoclassical compositions mixing jets of water with running water and groups of sculptures. A wonderful way of going deeper into the culture of the area is to taste some of the culinary preparations, in which olive oil with the Priego de Córdoba Denomination of Origin is clearly the main feature. Easter stew, turkey with almonds, salmorejo (a cold soup), kid with garlic and herbs, loin of pork and black pudding made with brains are some of the foods from the local cuisine. Among the desserts it is worth pointing out almond curd, "piñonates" (spiced cakes made with honey and pine nuts) and quince jelly.It is Andalusian cuisine you can discover by visiting other nearby destinations like Córdoba or Granada, cities declared World Heritage Sites by UNESCO. Their historic centres and symbolic buildings, like the Mosque-Cathedral, the Alhambra, the Generalife and the Albaicín district bring the traveller closer to key pieces of the Legacy of Andalus. Luque, Lucena, Carcabuey, Montefrío and Loja are other interesting places where the monuments are surrounded by the outlines of the gentle Subbéticas mountains.

Chapel of El Sagrario in the church of La Asunción