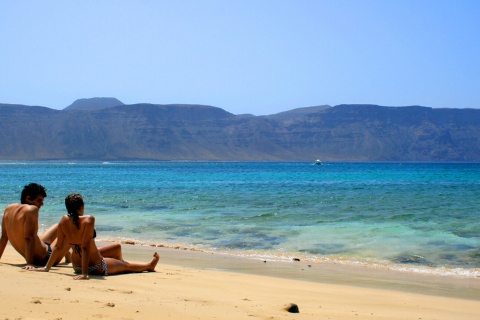 A landscape from another world

This nature reserve is situated on the island of Lanzarote, in the townships of Teguise and Haría. Besides its geological importance, there is also its biological significance, with several endangered and protected species.

The Chinijo Archipelago Nature Reserve covers the following areas of scientific-cultural interest: Alegranza, la Graciosa, Montaña Clara, Roque del Este, Roque del Oeste o del Infierno, los Riscos de Famara and the La Corona y Malpaís volcano. The landscape is characterised by the presence of volcanic structures, such as the Crater of Alegranza which has a diameter of 1.1 Km and a height of 289 m, and the Crater of Montaña Clara with a diameter of 1 Km and a height of 250 m. Numerous water fowl have their breeding colonies on the islands. Of these, seven are nesting species, such as the white-faced storm petrel, the Cory's shearwater, the little shearwater and two other species of petrel for example. Another group of birds present here are the birds of prey, represented by the fish eagle, the Eleonora's falcons, the Egyptian vulture or 'guirre', etc. There are also 14 species of terrestrial invertebrates which are endemic to the islets. The are 228 species of fish around the islets.