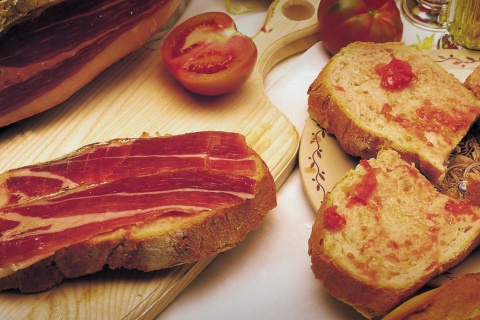 The cuisine of Catalonia 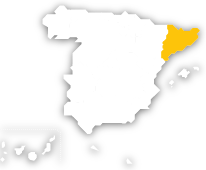 As with nearly all cultures, Catalonian cooking has great character. Its innovative cooking often looking back to history for inspiration. Although ultimately Mediterranean, Catalonia has been influenced by various cultures over the centuries: the Greeks, Romans, the Italians in the eighteenth century and the French have all left their mark on this complex cuisine. Catalonia has absorbed the best of each country and created a culinary package which forms part of the popular wisdom of the region.

The Catalonian cuisine uses the same ingredients as in other Mediterranean regions: tomatoes, garlic, fresh herbs, olive oil (particularly those of the Denomination of Origin Garrigues and Siurana, prepared using the variety of olive called the "arbequina"), onions, cod… The traveller is sometimes reminded of dishes from Provence, Rosellon, Naples or Sicily: cities which invaded the Kingdom of Aragon of which modern Catalonia formed part.

In any case, to understand the gastronomy of this region the visitor must keep in mind that Catalonia has various cuisines: sea cuisine at the Costa Brava, sea and mountain cuisine at Ampurdán, mountain cuisine in the Pyrenees of Lerida, the remarkable cuisine of the valley of Arán and Cerdanya in the Pyrenees of Girona and yet another type of cuisine on the coast of Tarragona, etc. Logically, each region has its own recipes and ingredients. If the sea urchins, rock fish and seafood casseroles called "suquets" tempt all visitors to the Costa Brava harbours, the wild variety of wild mushrooms are the passion of entire Catalonia during the autumn months, especially in the forests of Lleida. The combinations of seafood with inland products (rabbit with lobster and snails, chicken with crayfish, etc.) surprise all visitors to Girona, the eating ritual of "calçots" (small flavoursome green onions grilled on a flaming barbecue) and the intensity of a good "allioli" (garlic sauce) will never disappoint the traveller passing through the villages in Tarragona. Rice is also eaten throughout Catalonia and one seafood dish which is relatively recent despite its popularity is the "fideuá" (made with noodles). The various Catalonian sausages ("fuet", "llonganisa", "butifarra") or emblematic dishes such as the "esqueixada" or "escalivada" (mixed vegetable stews) are more examples of Catalonian cuisine.

Influence from the capital

Within this delicious culinary offer, Barcelona has always acted as the capital, becoming the best place to taste recipes from all over Catalonia. It was in Barcelona where the bourgeois adopted and improved country fare and all popular cooking can now be found in the endless amount of restaurants which make Barcelona one of the best gastronomy centres in Spain. One of the great attractions of the Catalonian capital is its unique market, "La Boquería", which dates back to medieval times and still preserves its original structure and is, without doubt, one of the most attractive markets in Europe. The "colmados", authentic specialist shops which were originally established to sell deep-sea products, demonstrate the sophisticated gastronomical taste of the locals.

A toast to its wines

Another activity which reflects the Catalonian dynamism is the wine industry. There are eleven different Denominations of Origin, due to the varied landscapes of the region. Catalonia has both large production regions such as Penedés and small and more specialised regions, such as Conca de Barberá, Alella and Pla de Bages. With this wine heritage, Catalonia is capable of producing fresh, light white wines, powerful red wines and classical rosé wines; light internationally recognised red wines and sparkling wines which are exported world-wide and have the Denomination Cava, the best natural sparkling wine in the world, together with French champagne. Historically speaking, the Catalonian vineyard basically produced red wines until the production of cava at the end of the nineteenth century was increased, thereby boosting the production of three other local varieties at the same time: Xarel·lo, Macabeo and Parellada. The last great success of Catalonian viticulture has been the recognition of the D.O. Priorat, an area which produces powerful and complex reds from Garnacha and Cariñena grapes which are considered as among the best in the world. The example of Priorat has served to recognise other Catalonion D.O.s, such as Falset, Tarragona, Empordà-Costa Brava and Montsant (the last one). Recently, the D.O. Catalunya has been created for local products throughout Catalonia.

The essential element of a Catalan Christmas is toasting with cava, a dry sparkling wine that is perfect for celebrating special occasions. There are also two particularly traditional dishes. On the one hand, escudella i carn d’olla (a meat, legume and vegetable stew that, especially at Christmas, contains pasta shells called galets). On the other hand, a dish of meat-filled cannelloni that is customary to eat on St Stephen’s day (26 December). Agramunt nougat and neules (traditional rolled biscuits) add the sweet note to the festive table.